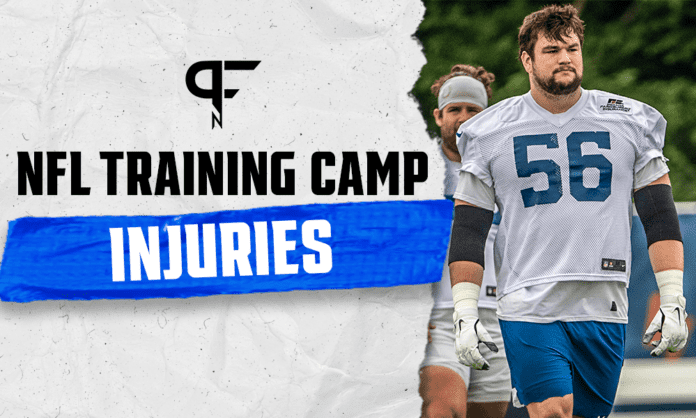 By Ben Rolfe
August 3, 2021
What's in this article? Click to show
NFL Injuries | Deshaun Watson not present at practice
Indianapolis Colts racking up the concerns
Kenny Golladay was another high-profile injury
NFL Injuries | Tyreek Hill missed portions of Chiefs’ practice
Dak Prescott takes a step back in the recovery process
Other NFL injuries to note

With Deshaun Watson, Kenny Golladay, and Carson Wentz all missing time on the field, the start of NFL training camp has seen the injuries begin to pile up around the league. Last week, it was the Dallas Cowboys that were suffering from the injury woes, but this week, the injury bug appears to have spread all over the NFL, including some of the bigger names. Let’s take a look at the latest injuries around the league.

A few weeks ago, it did not seem as though Houston Texans QB Deshaun Watson would be on the field for the early parts of training camp. Whether due to his trade request or the outstanding sexual assault allegations, it seemed unlikely Watson would be a player who would partake in padded practices.

With Watson absent from padded practices on the first day, NFL Network Insider Ian Rapoport reported that trainers were seen examining Watson’s foot and ankle on Monday [August 2]. Therefore, the absence appears to be injury-related as opposed to anything else.

While this initially seems minor, so did the foot injury for Carson Wentz when it first happened. What we have learned is that when it comes to NFL injuries, minors can quickly upgrade to majors.

According to Texans head coach David Culley, “nothing had changed” regarding Watson’s status. Thus, even when he is healthy, Watson likely will not play a major role. Early in training camp he has been taking snaps at QB but has also been playing as a defensive back on the scout team.

Indianapolis Colts racking up the concerns

It has not been a good few days for the Indianapolis Colts. The injuries keep racking up, and with the NFL season fast approaching, there is a race against time to get their key pieces on the field.

Just days after it was revealed Wentz would need surgery on an injury, guard Quenton Nelson will also go under the knife. Nelson’s foot injury has been described as a similar one to that of Wentz. He will get surgery from the same doctor later on Tuesday [August 3].

The timeline given for Wentz’s injury is 5-12 weeks, and therefore, Nelson’s is likely in the same bracket. Even if both hit the lower end of that, they will barely be back in time from their injuries for Week 1 of the 2021 NFL season. If that timeframe is closer to the 12-week mark, two key pieces of the Colts’ offense could be missing until around Week 7.

The Colts could get LB Darius Leonard back soon

A lot of the injuries in Indianapolis have gone under the radar at the start of NFL training camp. That is typically the case when a QB gets injured, as it usually steals the headlines.

However, a crucial part of the defense, Darius Leonard, has been struggling early in camp with an ankle injury. Nevertheless, Zak Keefer of The Athletic reports that Leonard appears to be coming back soon.

If the Colts face the potential of being without two offensive linemen and their QB to start the season, they will need to lean on their defense. With their pass rush viewed as a potential weakness, their LB play is crucial. Leonard has been a key element of their team in the past three seasons. Through those three years, he has 416 tackles, 15 sacks, and 7 interceptions.

The Colts opened training camp with left tackle Eric Fisher on the PUP list. Last Thursday, center Ryan Kelly injured his elbow when he was run into by Marlon Mack. Kelly is expected to miss a few weeks, so he should be back before the season. Still, the Colts could be without Nelson and Fisher to start the season. Any setback for Kelly would also mean they are without their center.

Kenny Golladay was another high-profile injury

Tuesday was not a good day in terms of injuries for leading NFL wide receivers. There was a lot of excitement bubbling around the New York Giants’ offense this season. Yet, they suffered a potential blow on Tuesday as Kenny Golladay was seen leaving the field.

Golladay grabbed his leg after dropping a pass from QB Daniel Jones. He then turned and left the field, visibly in pain, but at least jogging.

Golladay jogging from the field is good news. He did not seem to be avoiding putting pressure on his leg or seem overly frustrated. However, with a new QB-wide receiver pairing, getting a lot of reps is crucial in training camp. The Giants will not want to be without their star WR for more than a few days.

In Kansas City, Tyreek Hill initially took the field with the Chiefs for their padded practice, but he did not remain on the field long. Hill returned to the locker room but was then later seen lifting weights in a tent alongside the practice field.

The reported injury for Hill is knee tendonitis. While he did return to the field in his pads, his day on the field ended early. Furthermore, Hill was not the only player spotted leaving early.

Safety Juan Thornhill was seen walking away from practice with Hill. Thornhill suffered a groin injury on Monday, but the fact he was back out there today appears a good indication.

Perhaps more alarmingly for the Chiefs’ offense is that Mike Remmers was not present at practice. After the Chiefs’ offensive line crumbled down the stretch last season, they need all of their depth as healthy as possible. The Chiefs do have Orlando Brown and Lucas Niang who could line up at tackle. However, of the three, Remmers has the most experience with this offense.

Dak Prescott takes a step back in the recovery process

It was reported Tuesday that the Cowboys are taking a conservative approach with QB Dak Prescott. Prescott was held out of throwing on Tuesday and will not play in the Hall of Fame game. Mike McCarthy was quoted as saying that they are “being more conservative with his timetable” in order to stop it from becoming “something bigger.”

Other NFL injuries to note