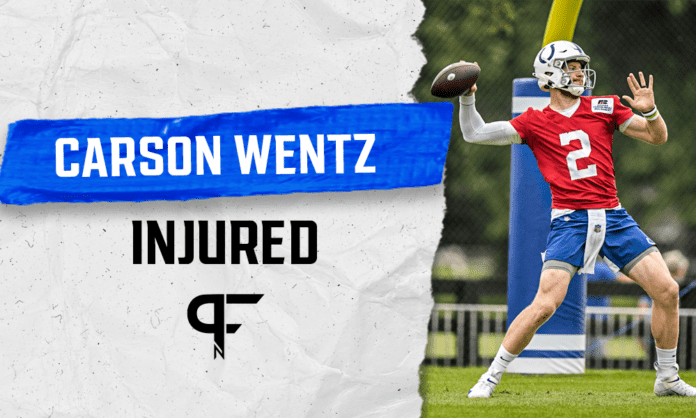 How serious is the Carson Wentz ankle injury, what impact will it have on the Colts, and how does it shift the fantasy football landscape?

By Adam H. Beasley
July 30, 2021
What's in this article? Click to show
Carson Wentz injures ankle in training camp
What do the Colts have behind Wentz?
What are the ripple effects of the Carson Wentz injury for fantasy football?
Want more NFL news and analysis?

It’s hard to tell who was more upset with the news that Carson Wentz is hurt again — Colts fans or Eagles fans. Both have serious skin in the game. According to ESPN, Wentz is out indefinitely with an ankle injury suffered at the end of Thursday’s [July 29] practice. He felt a twinge in his foot when he rolled out for a throw, per ESPN. Wentz is undergoing further testing.

NFL Network provided a slim sliver of hope for both fan bases, reporting that the early expectation is Wentz did not suffer a major injury and could play in 2021. That’s obviously huge news for Colts fans, who were pinning playoff aspirations on a Wentz revival in Indianapolis.

However, the Eagles have a real rooting interest too. They get a first-round pick, instead of a second, if Wentz plays 75% of Indy’s regular-season snaps or over 70% of playoff reps. If not, the pick Philadelphia gets from Indianapolis is a second-rounder.

The Colts have to hope for the best. There’s not a ton behind Wentz. And by not a ton, we mean nothing. One connected source stated, “If Wentz is out, they’re in a really tough spot.”

What do the Colts have behind Wentz?

That is saying the least. Jacob Eason received first-team reps on Friday, but he has never thrown an NFL pass. This also tells you what the Colts think of Sam Ehlinger and Jalen Morton, the other two quarterbacks on the roster.

“He’s with the docs, trying to figure out what the process is,” said Colts offensive coordinator Marcus Brady. “We are still evaluating what the next move is, how bad it is. Then we’ll go from there.”

The news was surely disappointing, but not particularly surprising. Wentz has appeared in just 52 games in the past four seasons, missing time with ACL, back, and head injuries.

In 2020, he was benched for ineffective play, leading to his trade to Indianapolis. The Colts got a conditional first in return. Playing time was the determining factor, and a serious injury would certainly jeopardize that.

What are the ripple effects of the Carson Wentz injury for fantasy football?

An all too familiar sentence once again popped up on the feeds of fantasy football managers on Friday. “Carson Wentz suffered an injury.” Perhaps he tried getting off on the first foot a bit too hard. For managers who have already drafted their teams, I would not panic just yet. There is an undertone of optimism that Wentz’s injury will not threaten his entire season, which leaves us in a holding pattern while we await more news.

However, their outlook, especially the receivers, is tied to having Wentz having a bounceback season in 2021. The hope was he could return closer to what we saw in 2017 and 2019 when he was the QB6 and QB9 while throwing for 3,667 yards and 30 touchdowns.

If news comes out that Wentz could miss multiple weeks of the regular season, values will take a plummet with Jacob Eason under center. The former Washington QB has not taken a snap in a game that mattered since December of 2019 against Boise State. While Taylor would remain an RB1, even with a drop to the RB10 range, it would be hard to see any of the pass catchers as more than bench staches without Wentz at the helm.