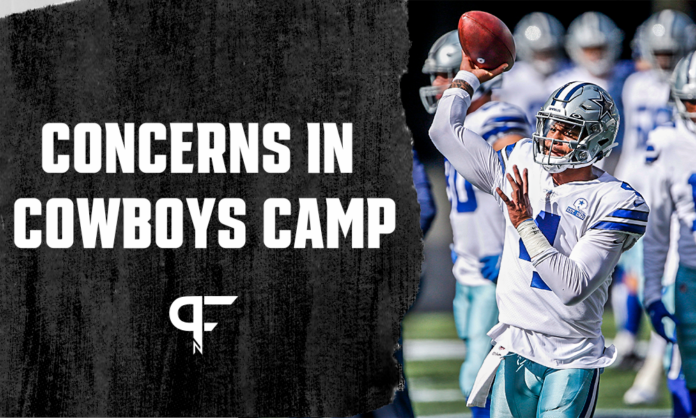 By Adam H. Beasley
July 29, 2021
What's in this article? Click to show
Dallas Cowboys Training Camp | The latest news on Dak Prescott’s injury
So how long will Prescott be out?
Want more NFL news and analysis?

Hard Knocks’ invasive cameras are turning out to be the least of Dallas Cowboys’ coach Mike McCarthy’s concerns at the start of training camp. Some pretty significant injury developments over the past week (including Dak Prescott) threaten to, at the very least, put the Cowboys behind their NFC East rivals ahead of this high-stakes regular season in Big D.

Prescott is out for an indeterminate length of time with a muscle strain in his throwing shoulder. The Cowboys list him as day-to-day, but few believe he will return to practice in the immediate future.

“I felt some soreness when making certain throws today, and I really just decided not to push things too far,” Prescott said late Wednesday. “Better to be cautious and smart about it. I don’t see this as any kind of serious setback. We’ll treat it on a daily basis, and I’ll be fine.”

Prescott left practice Wednesday with shoulder soreness and an MRI revealed the injury. He won’t need surgery, but he will undergo treatment and further evaluation.

McCarthy, appearing on 105.3 The Fan in Dallas Thursday morning, said the team is keeping Prescott out as a precaution and that the quarterback is experiencing soreness on some, but not all throws.

Todd Archer of ESPN reports that the issue is with Prescott’s latissimus dorsi, which according to Web MD, is “a large muscle that spans the majority of your back. Shaped like a fan, it’s generally rarely injured, but when it is, it’s due to working out or trauma.”

The medical website also notes that such injuries rarely happen without some other type of injury and may be accompanied by shoulder trauma.

So how long will Prescott be out?

That’s bad news for a team already without wide receiver Amari Cooper (ankle) and DeMarcus Lawrence (back), both of whom are on the physically unable to perform list.

The Cowboys internally have sky-high expectations, and as we’ve reported earlier, McCarthy has little room for error in Year 2. Many around the team believe he needs a deep playoff run to keep his job.

And while Prescott is expected back by Week 1, he could certainly use the practice that he’s going to miss. He hasn’t appeared in a game since last October.

It always seemed unlikely that he would appear in next week’s Hall of Fame Game. That’s obviously off the table now. And Dallas’ Aug. 13 exhibition game against the Arizona Cardinals seems iffy, at best, at this point.

If there is a silver lining (and we’re stretching here), it’s this — the Cowboys will get long looks at Garrett Gilbert, Ben DiNucci, and Cooper Rush over the next few weeks as they try to figure out who will back up Prescott in 2021.

As we’ve learned over the past 12 months, a No. 2 quarterback is a valuable thing in Dallas.