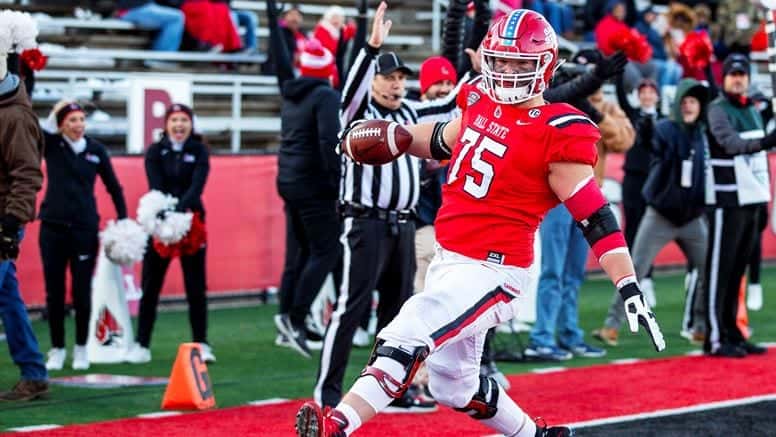 Positives: King-sized college left tackle who projects to the right side or guard at the next level. Works to bend his knees, gets his hands into defenders and controls opponents at the point of attack. Powerful, anchors in pass protection and stays square to keep defenders in front of him. Explosive at the point and large enough to engulf opponents.

Negatives: Lumbers around the field. Heavy-footed. Cannot slide off the edge and lacks lateral range as a blocker. Struggles to adjust and redirect on the move.

Analysis: Ksiezarczyk is a big, strong tackle who is best in a small area. He possesses next-level size and could make a practice squad as a right tackle, but he must polish his game.

Career Snapshot: Transfer from Illinois who started his final season at Central Michigan. Named First Team All-MAC as a senior in 2019, when he made 35 tackles with seven sacks and finished second in the conference with 16 tackles for loss. Made two starts and posted 29 tackles (seven for loss) with four sacks in 2018.

Positives: Undersized college defensive end who is smooth when asked to twist and stunt and easily moves about the field. Keeps his feet moving and works his hands throughout the action. Displays nice length, works to bend his knees and plays with proper pad level.

Analysis: Adesanya is a prototypical ‘tweener’ who lacks the size for defensive end and the speed for linebacker, but he also lacks the intensity for the next level.

Career Snapshot: Two-year starter who made 68 tackles (five for loss) with two interceptions and seven pass breakups as a senior in 2019. Made 41 tackles (three for loss) with one INT and three PBUs as a junior.

Positives: Hard-working safety who is best against the run. Fires up the field, displays a closing burst and wraps up tackling. Instinctive, effectively reads and diagnoses the action and brings opponents down at the point of attack.

Analysis: Jamison is a solid run-defending safety with poor computer numbers. He could be used as a traditional strong safety, but his prospects at the next level solely rely on his special-teams ability.

Positives: Underrated ball carrier who was very productive for Central Michigan despite injuries. Instinctive, helps the quarterback sell ball fakes, and gives effort in all areas. Works runs and displays the ability to cut back in a small area. Solid pass catcher who snatches the ball away from his frame. Pounds it out on the inside and works to pick up as much yardage as possible.

Negatives: Lacks the quickness and speed to get around the corner. Not a true perimeter ball carrier. Runs with a bit of an upright style.

Analysis: Despite injuries, Ward has been productive the past three seasons at Central Michigan. He does enough things well to get consideration in camp this summer.