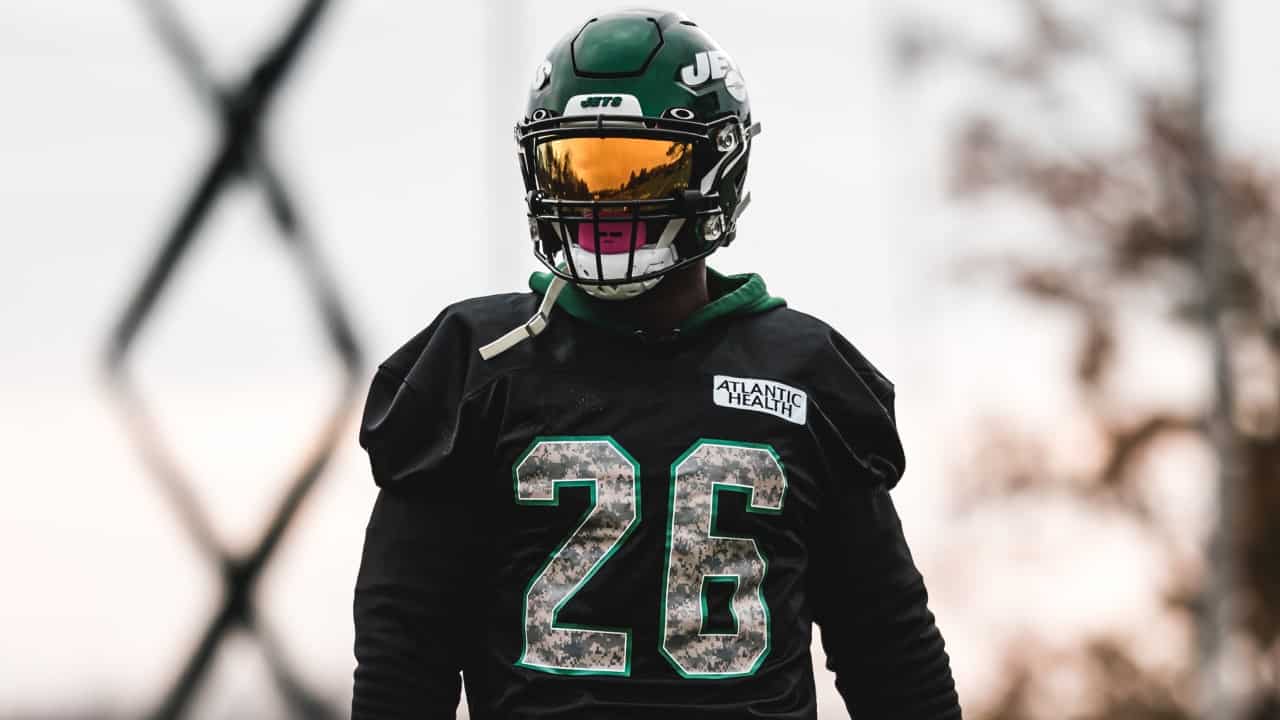 Image credit: New York Jets
What's in this article? Click to show
How did Bell’s numbers for 2019 stack up?
What does OSM tell us about Bell in 2019?
Could the offensive line be the key to Bell’s fantasy outlook in 2020?
How has Bell performed in Fantasy Point Differential?
Was Bell a consistent fantasy producer in 2019?
Le’Veon Bell’s 2020 Fantasy Outlook

Arguably no player has a more widely projected outlook for fantasy football in 2020 than New York Jets running back Le’Veon Bell. After signing a big-money deal with the Jets in the 2019 offseason, there were high expectations for Bell. Unfortunately for his fantasy managers, he failed to live up to those expectations. Now, as we head into the prime draft season for 2020, what should fantasy managers be expecting from Bell?

Any way you slice it, 2019 was a tough season for Bell. He posted a career-low in rush yards per game (52.6) and yards per attempt (3.2). On top of that, he had just four total touchdowns, the lowest number in a year in which he played more than ten games. Even in the passing game, he had the third-worst returns of his six-year career, managing just 461 yards and a single receiving touchdown.

Those numbers would see Bell finish as the 21st ranked running back and 63rd overall. Given that he was pretty widely taken as a top 20 selection, if not top 10 during drafts, this was an extremely disappointing return on investment. What arguably made the 2019 season even more disappointing was that Bell ranked eighth at the position in touches, meaning that the opportunities were there for him to succeed.

Pro Football Network’s Offensive Share Metric did not view Bell’s 2019 season favorably in the slightest. Among 48 running backs who logged enough carries to qualify for an OSM grade, Bell ranked 41st, which is considered on the low side of average. OSM grades players based on their performance in elements within their control, and clearly, Bell struggled to make an impression.

We already know Bell struggled when it came to yards per attempt, ranking second from last among qualified backs on the Next Gen Stats website. Additionally, Bell had the second-highest efficiency number, which highlights how many yards he gained on the field compared to the amount of ground he covered in total, with a lower number being superior.

Related | What is the fantasy outlook for Raheem Mostert in 2020?

Now your instinct might be that Bell’s struggles are due to facing stacked boxes? That was not the case, as he faced eight or more men in the box on just 17.14% of his carries, which placed him in the middle of the pack.

One thing to consider is that Bell has not received an OSM grade inside the top 30 at the position in any of the three seasons he has qualified for the metric. That somewhat leaves you scratching your head as to where Bell’s success has come from in the past. The answer to that question may very well lie in the performances of the offensive lines he played behind in Pittsburgh.

Could the offensive line be the key to Bell’s fantasy outlook in 2020?

To give credit to the Jets’ front office, they knew the offensive line was not good enough, and they have addressed it. In 2020, the Jets will roll out an entirely new offensive line from the one that started the 2019 season, which will come as a great relief for the entire offense. One of those changes was the addition of run blocker extraordinaire in college, Mekhi Becton, who will man right tackle.

Now a fresh offensive line needs time to gel, and with no preseason, there may be some early stumbling blocks. However, this group would be extremely hard-pressed to perform worse than the unit in 2019. That can only be a good thing for Bell’s fantasy outlook in 2020?

How has Bell performed in Fantasy Point Differential?

Bell’s poor performance in 2019 is highlighted vividly by his Fantasy Point Differential (FPD). FPD is calculated as the percentage difference of a player’s actual fantasy point total compared to their expected fantasy point total (xFP), which is calculated based on the number of carries and receptions they logged in a given year. Last season Bell logged the lowest FPD of his career at -25%.

Not only was Bell’s -25% FPD the lowest of his career, but it was also the second-lowest return of any back to log more than 100 carries in 2019, with his new teammate Frank Gore ranking last. If we look back over the last five seasons, only 10 players have logged a worse FPD than Bell did in 2019.

How does Bell’s Fantasy Point Differential shape up in his career?

Bell has never excelled when it comes to Fantasy Point Differential. Over the course of his six seasons in the league, he has only registered a positive FPD twice, with the highest being 6%. However, he has also not performed terribly either, with his lowest before 2019 being -10%.

Related | Fantasy running back sleepers for the 2020 season

Interestingly, if you were to compare Bell’s FPD scores to the run-blocking ranking of his offensive line that season, a pattern emerges. When Bell’s lines were ranked in the top 10, he finished with a higher FPD score than when the line was ranked lower. With the hope that we see an improvement in the offensive line in 2020, we should see somewhat of a bounce-back for Bell in 2020.

Was Bell a consistent fantasy producer in 2019?

While Bell did not succeed in relative terms in 2019, he was at least a consistent producer for fantasy owners. According to PFN’s Consistency Score, Bell ranked 12th with a score of 6.03. Historically, Bell has been a reasonably consistent producer for fantasy managers, having managed to record a consistency score above 5.4 in each of his last four seasons.

While he may not have been worthy of a top 10 or 20 pick in 2019, that consistency of knowing Bell would provide a solid return on a weekly basis is still a valuable asset at the right price. In 2019, Bell was a top-24 back 71% of the time, which placed him in the top 10 in that category. Additionally, Bell finished as an RB1 43% of the time, again finishing in the top 10.

It will always be hard to ignore the struggle that was 2019 for Bell and his fantasy managers. Anytime you draft a player with a top 10 or 20 pick and he fails to perform, it will leave a mark. However, success in fantasy is all about shaking off the pain and knowing when to capitalize on value.

While Bell’s overall numbers look ugly in so many ways, consistency is important in fantasy, especially if that consistency leads to you starting a back who finishes in the top 10 when it comes to most RB1 finishes. Sure this season will present some frustration with Frank Gore culturing short-yardage carries and touchdowns. However, with just three rushing touchdowns in 2020, Bell wasn’t really adding value on that front in 2019.

Currently, Bell’s ADP on Fleaflicker sits as the 35th player off the board, 18th running back, in PPR. Given that when he has played more than ten games, Bell has only finished outside of the top 15 at the position once, which is a supreme value for a player who could be in line for another 300 touches in 2020. Bell’s ADP in the third round allows fantasy managers to take a shot on upside in the first or second round, knowing they can fall back on someone who should be a reliable contributor in the third round.

Ben Rolfe is a fantasy and betting analysts for Pro Football Network. Follow him on Twitter @BenRolfe15.