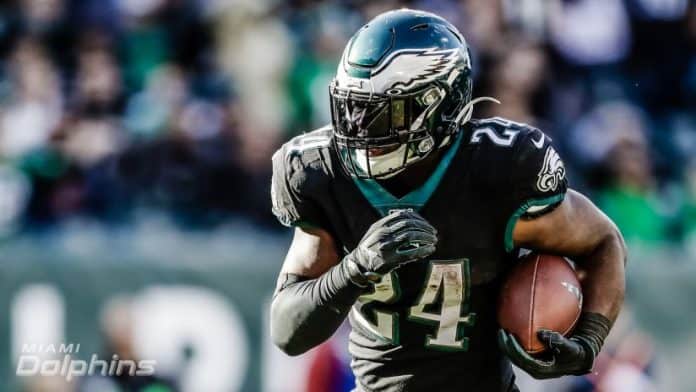 Fantasy running back sleepers for the 2020 season

Running back depth is important not only in the NFL, but also in fantasy football. Here are our top fantasy running back sleepers for 2020.

At the running back position in fantasy football, there are some obvious choices, including the likes of Christian McCaffrey, Saquon Barkley, Dalvin Cook, and others. But there are also some running backs who are somewhat under the radar and could really pay off on a minimal investment. In this top fantasy running back sleepers list, I look at who might fit that bill. Thanks to Flea Flicker for their valuable current Average Draft Position information.

Fantasy running back sleepers for the 2020 season

Quickly after free agency opened, the Dolphins gave Jordan Howard – who had shared the Eagles backfield with Miles Sanders – a pretty sizable contract with $4,750,000 guaranteed. They have since traded for Matt Breida, but overall, there isn’t much competition for rushes in Miami.

Without question, Howard’s struggles as a pass catching RB are very real and certainly concerning. But that is why Howard leads my list of fantasy running back sleepers – you can draft him for your fantasy team after 31 other running backs are off the board.

Related | Will Matt Breida be the Dolphins starting running back?

And if/when Miami gets down heavy on the scoreboard, Howard’s role will be minimal. But the Dolphins did improve their offensive line, and Howard fits their zone running scheme very well.

If you think Miami’s offense is slightly improved, Howard should get a lot of early-down work, and while he is a liability as a receiver, Howard is a very good ball carrier, and coaches love this guy. Howard is a no-nonsense guy that fits what Brian Flores is looking to implement in Miami. Remember – Ryan Fitzpatrick’s 243 rushing yards as quarterback led the entire team last year.

No matter where Duke Johnson has been in the NFL or whatever coaching staff he plays for, teams are reluctant to give him a high number of touches. But don’t forget that Johnson is the all-time leading rusher in University of Miami history.

“The U” has pumped out a few decent running backs over the years. Houston also gave up a third-round draft pick to add Johnson, so they must like him to some degree or at least was very fond of what he could do just one year ago. David Johnson will surely begin the season as the Texans’ starting running back, but we haven’t seen great play out of him in a few years.

Also, both Johnsons are great receivers in the passing game. Duke has averaged over nine yards per reception for four years in a row. There is a very good chance that Deshaun Watson lines up in the shotgun with one of these two as a sidecar with three or four wide receivers and slings the ball over the field a high percentage of the time, especially with the Texans highly suspect defense. Such an open attack fits Duke well and makes him a good fantasy running back sleeper in 2020. If you have no faith in David, Duke is your man.

With minimal practice time in the NFL’s current climate to get everyone prepared for the NFL season, it is risky to invest in rookies in fantasy. However, that risk is baked in with Evans, as you can snag him very late in drafts.

While Derrick Henry and Evans couldn’t look any more different, Evans is also a track runner like Henry, who is quick to get his pads parallel to the line of scrimmage and explode through a hole without a lot of wiggle involved. The third-round pick is ideal for Tennessee’s outside zone scheme.

Who is to say how Evans will adapt to pass protection as a rookie, but he does have some prowess as a receiver. And while we can expect Henry to catch more passes this year than last, particularly in the screen game, Evans could still inherit Dion Lewis’ passing downs work to some degree even early on.

If Henry, who has taken a ton of punishment over the last few years, were to fall to injury, Evans immediately becomes an every week fantasy starter. That is a bargain with a pick this late, and at a minimum, he is a premium handcuff in a time when insurance might be more critical than ever.

Is Ryquell Armstead a top prospect? Probably not, but we don’t even know that information yet, to be honest. What we do know is that Armstead has size and speed and runs hard. We also know that the only thing standing between Armstead and serious playing time is Leonard Fournette. That’s why he’s one of my fantasy running back sleepers for 2020.

The Jaguars declined Leonard Fournette’s fifth-year option and were widely rumored to be trying to trade him this offseason. Fournette also has a frightening injury history, particularly with his ankles. If Jacksonville’s season goes as poorly as most expect, could Fournette be dealt at the trade deadline or even earlier?

While the Jaguars offense is not the greatest one to be a part of, being the lead back for any NFL team has immense fantasy value, and Armstead runs with more urgency than Fournette nowadays. While he only averaged 3.3. yards per carry in Week 17 last year, Armstead was targeted nine times, which is awfully intriguing.

Okay, we are digging deep here. But this year more than ever, injuries and the global health situation could sideline running backs around the league. The depth at this position will be very important. While that isn’t fun to think about, it is reality, and many players might not be as well-conditioned when the season opens as most years.

While it is mysterious and peculiar that Freeman isn’t currently with a team and we don’t know the exact reason why that is true, it isn’t a stretch to think that any team that quickly becomes in need a back would be calling up Freeman. The last we saw this player, Freeman still had starting running back traits, although he wasn’t quite where he as a few years ago.

Still, do you think that Freeman is not going to play football this year? Grab him in the last round of your draft, wait until he gets the call, and snag one of my fantasy running back sleepers for the 2020 season.