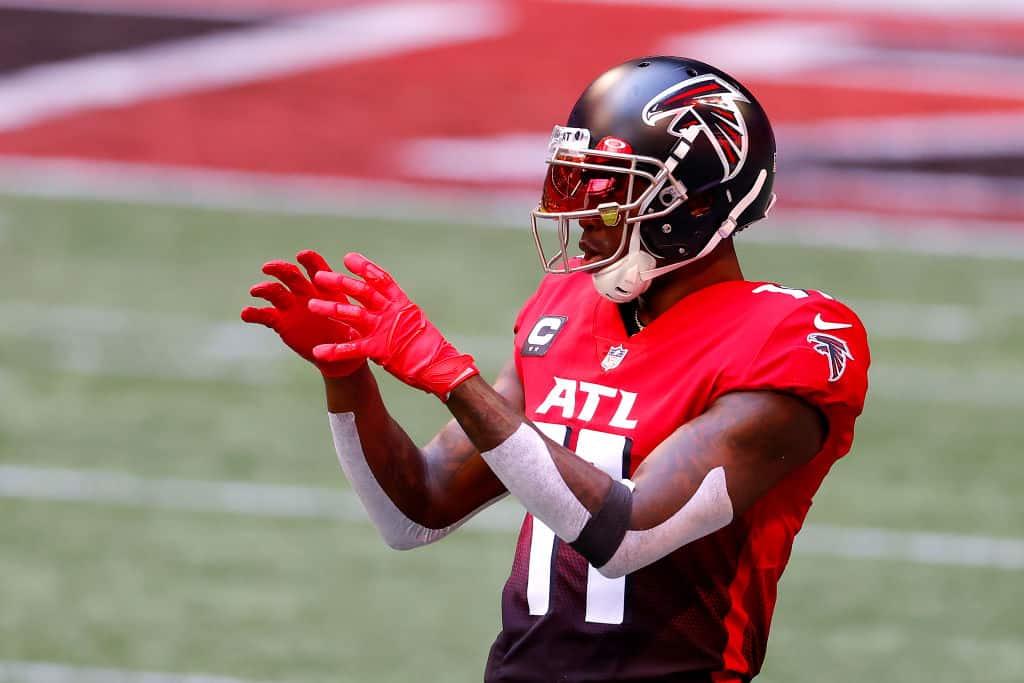 ATLANTA, GEORGIA - OCTOBER 25: Julio Jones #11 of the Atlanta Falcons warms up prior to the game against the Detroit Lions at Mercedes-Benz Stadium on October 25, 2020 in Atlanta, Georgia. (Photo by Kevin C. Cox/Getty Images)
What's in this article? Click to show
Julio Jones appears fully healthy and does not carry an injury designation heading into Thursday Night Football
Julio Jones could be in for a massive Thursday Night Football fantasy performance if history remains true
Julio Jones is a locked-in top-five fantasy option in Week 8
Want more fantasy football analysis and news?

Death. Taxes. Julio Jones finishing inside the top 10 amongst all fantasy football wide receivers. Some things in life are inevitable. However, it is 2020, nothing has gone according to plan, and Julio Jones currently sits at WR26 in PPR scoring. In a season slowed down by injury and Father Time appearing to catch up, is Julio Jones safe to start in Week 8 on Thursday Night Football against a Carolina Panthers team that has been a difficult fantasy matchup for the majority of receivers they have faced? Should we be worried about any lingering creeping back up, or is Julio back to being his old self that terrorizes secondaries?

Jones, the usual Iron Man of the NFL, has been dealing with a nagging hip injury that has caused missed games and limited snaps; however, it appears that he is back to full strength.

As of Wednesday’s final injury report, Jones does not carry any designation entering their game against the Carolina Panthers on Thursday Night Football, so we expect a heavy target and snap share for the 10-year veteran.

Jones has been a fixture on Atlanta’s injury report nearly the whole season. This week, Jones was listed with a hip injury, which capped his practice reps Monday and Tuesday before being a full participant at Wednesday’s walk-through.

After being slowed down and missing games, Jones has been on a tear in an effort to get back on track, along with trying to help save the Falcons’ season. Since returning, Jones has caught 16 of his 19 targets for 234 yards and two touchdowns in the previous two games. Jones has also led the team in offensive snaps played, averaging 80% over the past two weeks. He has shown time in and time out that when active, fantasy managers need to start him.

Jones should be excited about this matchup on several levels. For one, he missed their Week 5 matchup against the Panthers due to a hamstring injury, a game in which the Falcons lost 23-16. Unfortunately for the Panthers, Jones has been able to play them twice a year for the last decade and has essentially had his way with their secondary.

In 15 games against the Panthers, Jones has caught 82 passes for 1,390 yards and six touchdowns, including one of the six 300-yard receiving games in NFL history.

It also seems that the bigger the stage, the brighter Jones shines, and the more fantasy points he scores, including Thursday Night Football.

In his eight Thursday night games, Jones has caught 59 passes for 912 yards and four touchdowns. He has only one game with fewer than 85 receiving yards and has caught at least five passes in each game. Week 8 is the first time Julio Jones and the Falcons have faced off against the Panthers on Thursday Night Football.

Jones should be productive against Carolina again, especially if cornerback Rasul Douglas doesn’t play. Douglas, one of the best cornerbacks in coverage this year, was placed on the reserve list on Friday. On Tuesday, the Panthers also released cornerback Eli Apple after leaving practice for treatment on a hamstring injury that has hampered him much of the season. Apple signed a one year deal in May and had only been active for two games.

The Panthers will be left with Troy Pride, Donte Jackson, and rookie Stantley Thomas-Oliver as viable coverage options. This takes what has been a fairly tough defense to throw against and turns it into one that Matt Ryan should be able to carve up.

Heading into this week, the Panthers allowed the sixth-fewest fantasy points to opposing wide receivers at 30.84 points per game and only 7.45 yards per target, ranking second to only the San Francisco 49ers.

Where they have struggled is when someone has seen volume. Of the three players to see double-digit targets, they have all smashed in their matchups: Keenan Allen 13/132/1, Mike Evans 7/104/1, and Calvin Ridley 8/136/0 (Julio missed this game). Jones looks to add his name to this list on Thursday.

Julio Jones is one of the best wide receivers in NFL history. As mentioned above, his Thursday Night Football fantasy performances have been especially good. Since 2011, when he joined the league, Jones is first in catches (804), yards (13,406), and yards after the catch (4,503) while scoring 59 touchdowns over that stretch. Jones is a player that, when active, you have to plug him into your lineups every week in fantasy. Averaging 17.5 PPR points per game, he is scoring more each week than Keenan Allen, D.K. Metcalf, Tyreek Hill, Chris Godwin, and Justin Jefferson.

Related | Is DJ Moore a fantasy must-start against the Falcons on Thursday?

Julio Jones’ fantasy outlook is as safe as it gets. Yes, he is competing with another alpha receiver in Calvin Ridley. Still, there is more than enough volume to go around. Plus, when Jones is on the field, Matt Ryan plays significantly better, which should come as a shock to absolutely no one. In four full games with Jones in the lineup, Ryan has completed 122 of 172 passes (70.9%) for 1,432 yards (8.33 yards per attempt), 11 touchdowns, and one interception.

Plus, there are very few NFL corners – especially when it comes to the Panthers – who can hang with Jones, especially at the point of the catch. After firing their head coach and general manager, the Falcons need to find their identity and band together, starting with the veterans putting this team on their back. This game has a very good chance of being a higher scoring affair and one that should lead to several players being fantasy relevant with Julio Jones leading the way as the top-scorer.