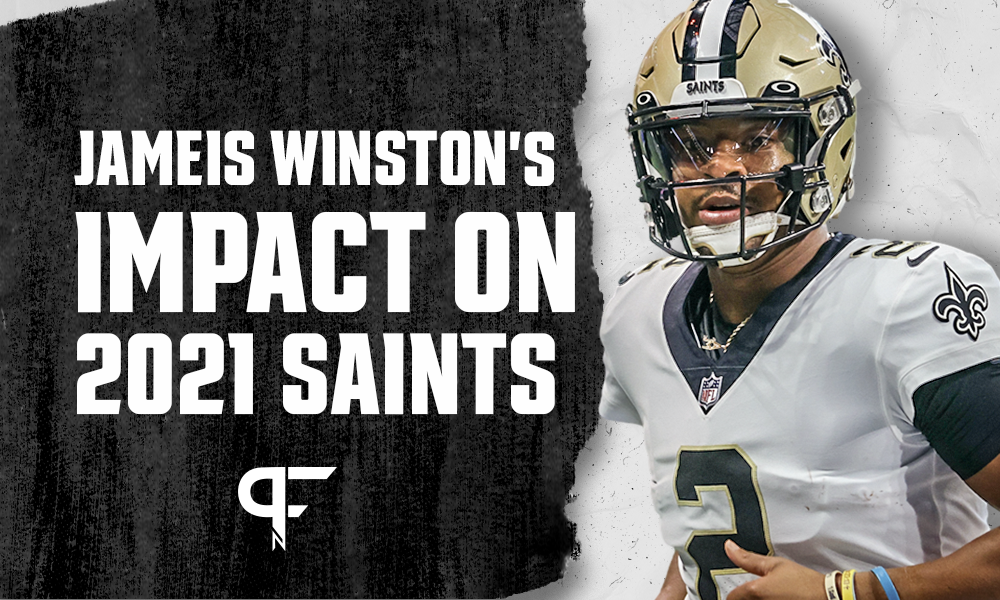 By Dalton Miller
June 3, 2021
What's in this article? Click to show
Can Jameis Winston be the long-term answer for the Saints?
The negatives with Winston
The positives with Winston
Want more NFL news and analysis?

This is new territory for the New Orleans Saints. This will be the first time since 2005 where they start someone not named Drew Brees to begin the NFL season at quarterback. Thus, Jameis Winston is the favorite to begin the season as the Saints’ starting quarterback in 2021. It should make for one of the more controversial offseason topics.

Winston re-signed with the Saints on a one-year, $5.5 million deal worth up to $12 million with bonuses. Although his deal is worth less than Taysom Hill’s, the team may still feel Hill is worth his contract in his current role. There is certainly an exciting unknown factory with Hill, but Winston’s high-level play is about as good as it gets.

But can Sean Payton continue to siphon Winston’s top-end play while mitigating his propensity for mistakes?

Can Jameis Winston be the long-term answer for the Saints?

Will Winston limit his mistakes enough to inspire long-term confidence in his abilities?

Winston exploded onto the scene as a freshman at FSU, throwing for over 4,000 yards and 40 touchdowns in 14 games that season. In that time, he completed 66.9% of his passes and won the Heisman Trophy. As a team, the Seminoles went 14-0 and won the BCS National Championship.

However, like so many quarterbacks, Winston hit a sophomore slump. In nearly 100 more attempts as a passer, Winston declined in passing yards, threw 15 fewer touchdowns and 8 more interceptions than in 2013. The team lost in the inaugural College Football Playoff semifinal 59-20 to an Oregon team led by eventual No. 2 overall pick Marcus Mariota.

Nevertheless, the Tampa Bay Buccaneers selected Winston No. 1 overall in the 2015 NFL NFL Draft. As a result, Winston felt the burden of a bad franchise.

The Buccaneers had finished last in the division in the previous four seasons before drafting Winston. By the time he arrived, they had been through three head coaches in four seasons. His original coach, Lovie Smith, would only last one season with Winston. Dirk Koetter, his replacement, lasted three.

Historic might be the most boring way to frame the conversation. It was remarkable. It was pure comedy to watch the highs and lows of Winston’s 2019 season. He threw a league-record 7 pick-sixes. The seventh, his final throw of the season, passed Peyton Manning and Rudy Bukich, who both had 6. A well-earned title.

This marked the first time a quarterback had ever thrown 30 touchdowns and 30 interceptions in a season, but context is important.

How many of those interceptions were tipped passes? Which ones came when pressure was in Winston’s face? How many of them went off a receiver’s hands into the hands of a defender?

The answer to those questions is not many. It’s often difficult to place blame definitively on one person with all the moving parts. However, watching Winston can make things very clear.

He’s the most frustrating study of any quarterback in the league. Too many of the interceptions came from a clean pocket; too many that happened in one-possession games. Moreover, too many poor leverage reads ended in a defender at full sprint downhill for a pick-six. Additionally, there were too many where Winston failed to peek the hook defender on quick attempts over the middle.

The negatives with Winston

Winston only threw 11 pass attempts in 2020 for the Saints. Thus, his sample size in the Saints’ offense is small.

One of those pass attempts, in particular, came against the San Francisco 49ers in Week 10. That’s where Winston received the most game action during the season. On this particular attempt, Michael Thomas ran a skinny post against a cornerback with outside and over-the-top leverage on a max protect play-action pass. Thomas had a step on the cornerback and Winston delivered.

Unfortunately, Jimmy Ward let the motion man go, and the single-high free safety rotated down to the motion. Ward slid into the box and became the hook defender on the play side. There is no excuse for Winston to miss Ward dropping underneath Thomas. His pocket was clean, and he had his outlet open in the flat on 2nd-and-8.

Winston possesses an arrogance in his arm and processing speed that is unrivaled in the league. It’s a flaw he’s possessed for years now. After watching the 2019 tape, I’m not sure if the best LASIK surgery in the world can fix his eyes. Hopefully, a full offseason and tutelage from Payton can reel the bad Winston in enough for the Saints to reap the rewards.

The positives with Winston

Winston makes mistakes, but those mistakes come from what is based on quick decision-making. If his team and the Saints’ coaching staff can reset what he in the past cued as a correct leverage read just a little bit, Winston can come out the other end a cleaner prospect. He is an incredibly quick decision-maker, to his detriment. If Winston slows things down just a little bit, he can avoid even just a few fatal mistakes.

Winston’s arm talent is undeniable. He is an accurate quarterback to all three levels of the field. Despite not being the most athletic quarterback, he’s able to play out of structure and make throws accurately on the run.

His arrogance in his arm and processing speed allows him to make plays that few other quarterbacks can. This comes in handy when attacking the middle of the field between safeties and behind linebackers in two-high looks or between the outside cornerback, safety, and APEX defender in a single-high zone look.

One thing we know for sure is that Winston makes the offense more explosive downfield. In 2019, he averaged 10.5 air yards per pass. In that same season, Brees averaged just 6.7 air yards.

Even in Koetter’s offense, Winston slung the ball downfield at an even higher clip than he did in 2019 (10.8 air yards). It will be interesting to see who becomes the downfield threat for the Saints’ offense.

If Winston can trust his eyes and arm to make quick decisions, he can be a good NFL quarterback. That is if he recalibrates what is and is not leverage to attack. It’s an incredibly fine line that might take time to work through as the season progresses. But due to the talent on the Saints’ roster, Winston might not have a long enough leash to make it through the season.