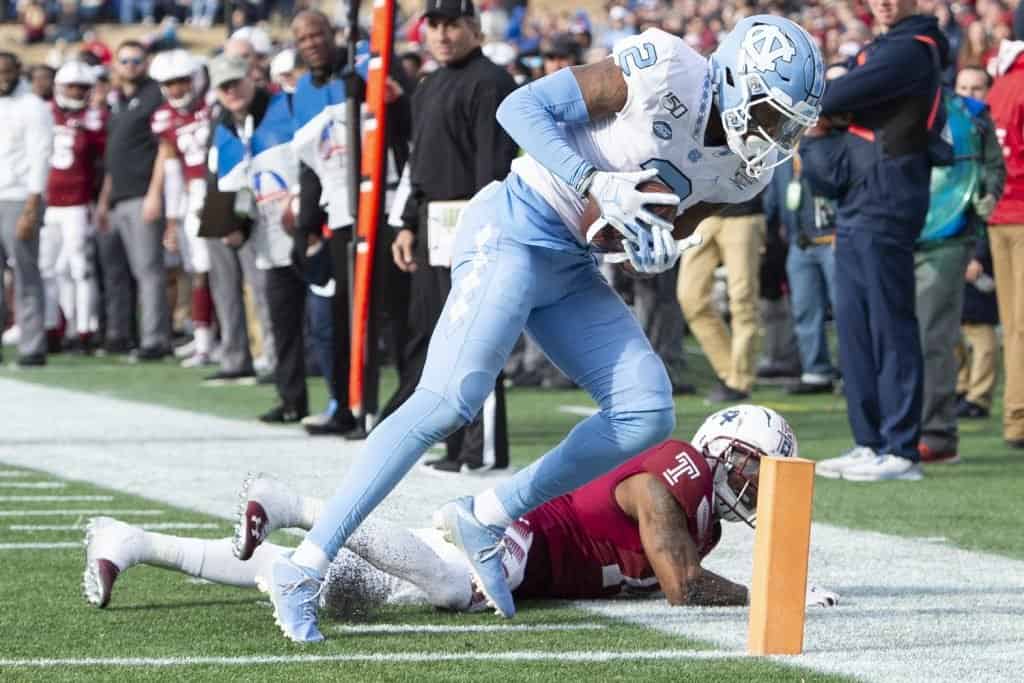 Dyami Brown is an intriguing mid-round target for fantasy football

You can pick your poison in this draft class. There are the route technicians (DeVonta Smith), contested-catch machines (Ja’Marr Chase), YAC monsters (Rondale Moore and Elijah Moore), and then there are deep ball specialists (Brown).

After a relatively quiet freshman season, the former Tar Heel exploded for 51 receptions, 1,034 yards, and 12 touchdowns as a sophomore. Playing in one fewer game in 2020, he exceeded his totals with 55 catches for 1,099 yards. His touchdowns did dip down to 8 last season, however. Brown enjoyed a fantastic college career and was a semifinalist for the Biletnikoff Award last year.

Brown is a prospect that won vertically rather than across the middle. His head movement and jab-step at the line and mid-route are enough to win on deep routes, but he lacks the twitch to beat defenders over the middle routinely. This is something that he will quickly have to develop in the NFL. He also displayed a high-level ability to track the ball.

The one knock on Brown is his hands, which is a problem since the job revolves around them. Drops have plagued Brown and not just on contested or deep targets but also on intermediate routes where he would try to body-catch rather than extend his arms. This issue may fix itself over time, but that’s the concern. Time is a luxury fantasy owners do not have.

Top 5 landing spots for Brown based on draft projections

So long as Brown lands on a team that likes to push the ball vertically and possesses draft capital around his projection (Round 3), he is a stellar second-round selection in rookie drafts. Still, he may need to begin the redraft season on waivers unless you own deep benches.

There is no question the Eagles desperately need pass catchers. While I have been a Jalen Reagor fan, it’s hard to see him being a true No. 1. Outside of him, it’s an uninspiring amalgamation of Greg Ward, Travis Fulgham, Quez Watkins, John Hightower, and J.J. Arcega-Whiteside. It’s honestly a toss-up between them and the Detroit Lions for the dubious distinction of the worst receiver corps in the league.

If they want to give Jalen Hurts a fair shot to succeed, addressing the WR room needs to happen. Brown is an explosive player who averaged 20.0 yards per catch last season and 18.7 during his career. From a pure volume standpoint, you will be hard-pressed to find a landing spot that will offer more.

Brown would be the premier threat and would push Reagor into the slot, his more natural role. It all comes down to whether or not Hurts will hit him as much as we need him to for fantasy totals. From a points-per-touch aspect, Brown could be phenomenal. The question is and always will be the number of those touches.

This one is fascinating to me. At first glance, you think of Odell Beckham Jr. and Jarvis Landry and that anyone else here would be a waste. I’m not so sure about that. Brown brings a different skillset to Cleveland that they have been lacking — a genuine vertical threat. While I will be the first to admit that I am quite partial to Donovan Peoples-Jones, he did not see much usage last season.

Under Kevin Stefanski, Baker Mayfield took tremendous strides in his development, especially in accuracy. He went from a 59.4% completion rate and a 78.8 QBR in 2019 to 62.8% and 95.9 last year. This is an offense who can put up points and find themselves in the AFC title game if they play to their potential. Brown adds another element to an already dangerous team and one that fantasy managers would exploit.

When I am looking for potential rookies in fantasy, I look for ambiguity. Which situations are unresolved? The WR3 for Washington is one of those positions:

Fitzpatrick loves to take risks vertically, and Brown could be an early recipient of those targets. Additionally, I do not want to paint Brown as only a straight-line receiver. He can work intermediate routes; they’re just not his forte.

The average depth of target is arguably the highest correlator when it comes to predicting fantasy production. Should the Fitzpatrick-to-Brown deep-ball chemistry develop early on, Brown would be a viable streamer in 2021 fantasy leagues.

Could this finally be the year the Packers please Aaron Rodgers and give him a new weapon? I hope so. Otherwise, that Jeopardy role might be even more enticing. What is enticing, however, is Brown receiving targets from Rodgers. The reigning NFL MVP is coming off a season where he threw for 4,300 yards and 48 touchdowns with virtually one receiver. Granted, it helps when that receiver is Davante Adams.

Packers coach Matt LaFleur would undoubtedly be excited to add another deep threat for defenses to respect alongside Marquez Valdes-Scantling. The questions about drops would come into play, but Brown has yet to receive the look from Rodgers. Perhaps Brown will give Green Bay fans flashes of  Jordy Nelson and Greg Jennings.

After all, this is fantasy we are talking about, right? How could you not mention the Kansas City Chiefs here?

We know how dangerous the Chiefs’ offense is with Patrick Mahomes slinging it like a backyard football game to dominant pass catchers like Travis Kelce and Tyreek Hill. Andy Reid loves to air it out, and Brown fits right into KC’s offense. No defense in their right mind plays press against the Chiefs, thus eliminating Brown’s lackluster release.

There isn’t a team in the NFL that can produce fantasy points the way the Chiefs do. We see it week in and week out. With so many other pieces to worry about, good luck paying attention to Brown. I guarantee Mahomes will be paying attention to him, and that’s all that matters. Anyone who puts on a Chiefs’ jersey can be a fantasy goldmine, and Brown is no exception. The boom-or-bust potential is there for Brown, but the ceiling is sky-high in KC.