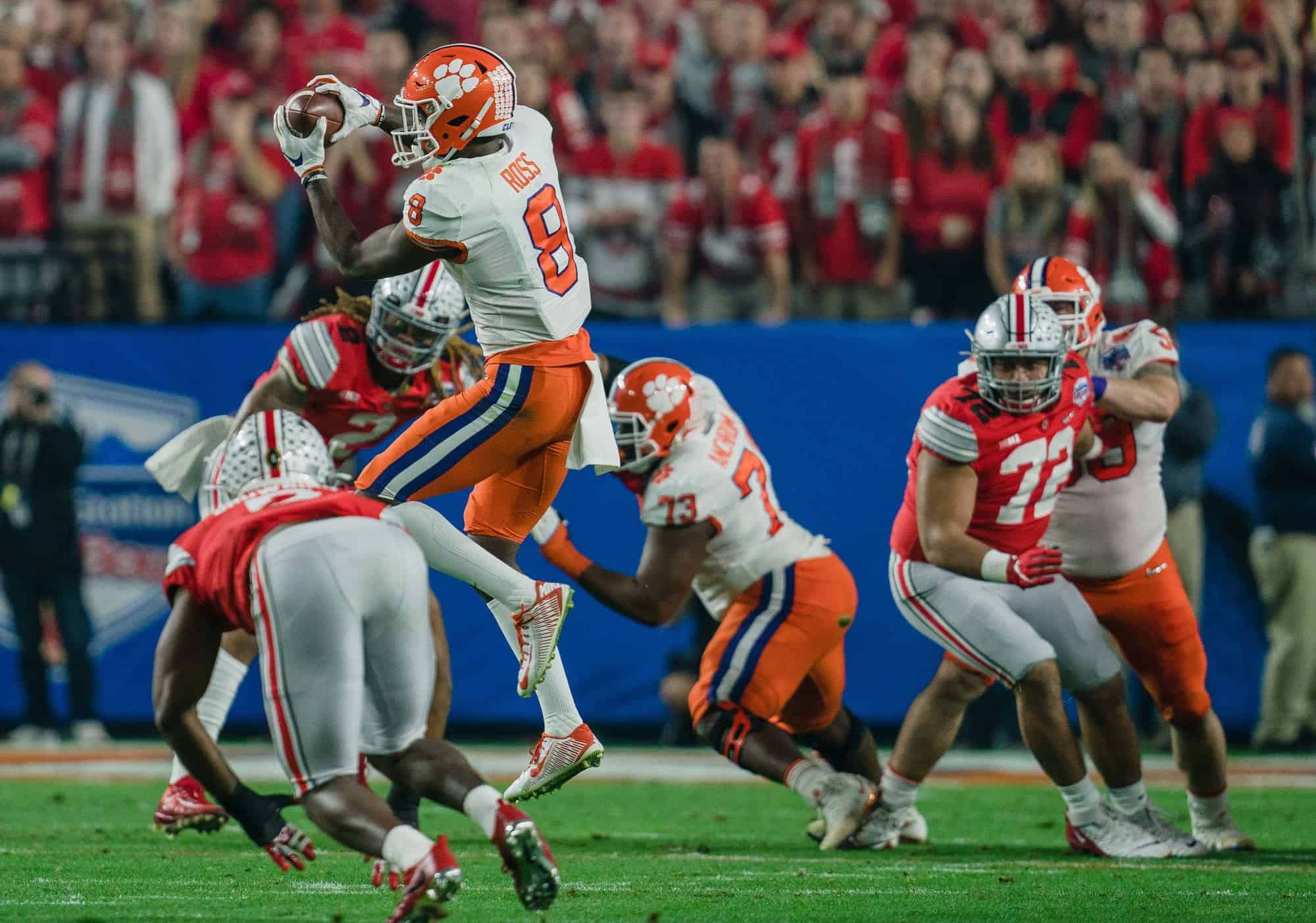 With the CFP National Championship Game a few short days away, we preview the big game with a look at three matchups that could help determine the outcome of the game. While we would love to focus on the trenches and the hog-mollies upfront, those of us in the fantasy football community will instead preview the best skill-position matchups to watch in the College Football National Championship.

Whether you’re screaming “Go Tigers” or “Geaux Tigers,” there’s just no denying the amount of offensive talent on both sidelines. The 2020 College Football Playoff National Championship features two QB’s very likely to get selected #1 in the next two drafts, two emerging three-down running backs, and four wide receivers with first-round potential in 2020 and 2021.

That’s the most offensive talent we’ve seen on one field since… the 2019 National Championship featuring Clemson and Alabama. Let’s hope for LSU’s sake that it goes better than the 44-16 drubbing that the Crimson Tide took a season ago.

After a spectacular season in which the LSU offense took a complete 180 turn from previous seasons, wide receivers Ja’Marr Chase and Justin Jefferson enter the CFP National Championship with the utmost confidence. They’ll face their toughest test of the season in Monday’s national championship showdown with the defending champions of Clemson.

Chase, the 2019 Biletnikoff Award winner (given to the nation’s top wide receiver), has been the more explosive of the two wideouts with 1,559 receiving yards despite a quiet post-season. In two contests against Georgia and Oklahoma, Chase had a combined five receptions, 102 yards, and a single touchdown reception.

While Chase has been quiet this postseason, Jefferson has excelled with a combined 21 receptions, 342 yards, and five receiving touchdowns in the SEC Championship and CFP Semi-Final. Quarterback Joe Burrow has consistently force-fed Jefferson with opportunities this season, including 18 total targets in LSU’s semi-final victory over Oklahoma.

So, should we expect more of the same in the CFP National Championship? As the great Lee Corso would say, “Not so fast, my friend.” As noted by Rotoworld’s Thor Nystrom, Jefferson played 91.7% of his snaps this season from the slot, meaning he’s very likely to get a large helping of Clemson hybrid LB/S Isaiah Simmons.

With passing game coordinator and wide receivers coach Joe Brady learning under Sean Payton, it shouldn’t be a surprise to see LSU using similar tactics we saw from the New Orleans Saints for years. As we saw from Marques Colston and now Michael Thomas in New Orleans, Jefferson often uses his bigger frame (6’3″) to create a size advantage in the slot against undersized safeties or nickel backs.

Clemson defensive coordinator Brent Venables uses Simmons all over the field, but the 2019 Butkus Award winner seems destined to shadow Jefferson in the slot whenever possible. When Simmons is rushing the passer or dropping elsewhere, safety K’Von Wallace will get next dibs at Jefferson in the slot. Tanner Muse is a force in the box, but the last thing Clemson wants to see is the safety in a one-on-one situation in coverage.

Clemson’s boundary cornerbacks, A.J. Terrell and Derion Kendrick have the size and tenacity to compete against Chase and Terrace Marshall Jr. on the outside. Day-two prospect Terrell is best known for his opening-drive pick-six off Alabama’s Tua Tagovailoa in last season’s CFB National Championship, while Kendrick is a former five-star wide receiver recruit. Since converting to defense, Kendrick has shown surprisingly good technique with the expected ball-skills you should see from a former wide receiver.

If there’s ever a game where the Clemson wide receiver corps gets overlooked, the 2020 CFP National Championship preview might be it. That would be a mistake. Even if the numbers don’t show it, Clemson’s Tee Higgins and Justyn Ross are just as explosive and talented as the duo from Baton Rouge.

After showing surprising yards-after-catch ability on top of the usual jump-ball prowess, there is some talk that Higgins has cemented himself as a first-round lock in the 2020 NFL Draft. Higgins is the current WR3 in my updated 2020 dynasty rookie rankings, while Ross is still seen as one of the top 2021 prospects at the position.

Higgins has been terrific this season with 1,115 receiving yards and 13 touchdowns, while Ross struggled with injuries but still managed to put up a solid 61-789-8 receiving line in 2019. Slot-receiver Amari Rodgers has been quiet down the stretch of the season, but the junior from Knoxville still managed a 28-418-4 TD receiving line this season. Not bad for a wide receiver that was widely expected to miss the entire 2019-2020 season after suffering a torn-ACL during a March 25th practice.

With an impressive collection of secondary talent, LSU will look to slow down Trevor Lawrence and the Clemson passing-game. Freshman cornerback Derek Stingley Jr. (6 INT) has been one of the surprises of the season, while teammate Kristian Fulton is widely-expected to get his name called in the first two rounds of the 2020 NFL Draft.

Grant Delpit was up-and-down to begin the year, but the safety has lately started to remind viewers why he’s expected to get his name called early on day one of the 2020 NFL Draft. Even though Delpit only has two interceptions on the season, the impressive safety makes his mark on every game. Fresh off a season-long ban, Clemson tight end Braden Galloway could be a surprising X-Factor if Higgins and Ross unexpectedly struggle against LSU’s stud cornerbacks.

Despite all of the offensive talent on both sidelines, Clemson running back Travis Etienne might be the most dominating of them all. Etienne rushed for 1,536 yards and 18 touchdowns on the ground despite only totaling 192 carries on the season.

Etienne’s speed has been well-known since his days as a high-school recruit out of Louisiana, but the running back’s strength and ability to force missed tackles set him apart from others at the position. Pro Football Focus credited Etienne for 84 missed tackles forced on 181 regular-season carries, which is truly astonishing.

The Clemson running back is also an improving pass-catcher, while also growing in pass-protection. Etienne still shows weaknesses as a pass-blocker, but his improvement from his freshman season proves that he can grow and develop with more time.

Etienne has already put aside the questions about his pass-catching ability after a 32-396-4 receiving line out of the backfield this season. Clemson’s CFP Semi-Final victory over Ohio State put this improvement on the national stage for the world to see. With another strong showing through the air in the College Football Playoff National Championship, Etienne could show NFL talent evaluators that his new-found receiving prowess is a preview of what’s to come on the next level.

With Clemson unable to get the ground game going, the Tigers put Etienne’s new-found receiving prowess to good use against the Buckeyes. Etienne finished with only 36 rushing yards on ten carries, but the running back produced 98 receiving yards and two touchdowns through the air, including the game-winner with less than two minutes remaining.