With the college football regular season wrapped up, we take a look at our updated 2020 dynasty rookie rankings entering bowl season. Running backs Travis Etienne, D’Andre Swift, and Jonathan Taylor lead the best available running backs available in the 2020 NFL Draft, while Jerry Jeudy and CeeDee Lamb are the best of the wide receiver group.

The 2020 NFL Draft is extremely deep at running back and wide receiver, while the tight end class might not have a standout prospect. The severe injury suffered by Alabama quarterback Tua Tagovailoa puts a damper on the 2020 QB class. However, there’s still more than enough depth at the position to find value late in dynasty drafts.

We’ve seen great WR and RB classes over the years, but it’s hard to imagine many classes with the collection of talent available this season. With so much top-tier talent available in one class, the 2020 NFL Draft sets up as one that could significantly alter dynasty leagues for years to come.

Here’s a look at our updated 2020 dynasty rookie rankings. Be sure to check out my midseason rankings for further information about these prospects.

With the college football season shifting into bowl game and College Football Playoff preparation, the top-five picks of 2020 dynasty rookie drafts are falling into place. While the order of these selections will vary from draft to draft, I’d be shocked if the five players listed in Tier One weren’t the top-five players drafted in most 2020 rookie drafts.

Looking at the talent entering the 2020 NFL Draft, it’s certainly a great season to have a top-five pick. At the very least, it’s a nice consolation prize to help ease the pain of another disappointing dynasty football season.

I have running backs Travis Etienne, D’Andre Swift, and Jonathan Taylor ranked above alpha-receivers Jerry Jeudy and CeeDee Lamb in my 2020 dynasty rookie rankings due to the scarcity of the running back position. If you’re comfortable with the running backs on your roster, you can make the case for taking Jeudy or Lamb #1 overall due to wide receivers having longer NFL careers.

Even though I have Etienne ranked the highest, you could conceivably make a case for any of these three runners as RB1. While Clemson’s Etienne might not make many defenders miss, the running back usually doesn’t have to thanks to tremendous long-speed and the ability to break tackles at a record pace.

Swift, on the other hand, uses his superior quickness to routinely make defenders miss in the open field. Swift is the best pass-catcher of the top-three and is likely to see three-down duties from day one.

Taylor is a tremendous inside runner that has silenced his critics this season. After catching 16 total passes in his first two seasons, Taylor changed the narrative in 2019 with over 200 receiving yards on 24 receptions. Taylor also entered the season without a single score through the air, but the Badgers running back had five touchdown receptions in the 2019 regular season.

Even in a class full of potential superstars, Jeudy and Lamb stand out above the rest. Both playmakers have the potential to be #1 WR’s from day one. Entering the season, I never imagined anyone would challenge Jeudy for WR1 status, but Lamb’s progress in 2019 has them pretty even after the conclusion of the regular season.

As the next best running back available behind the big three, Ohio State’s J.K. Dobbins would be the most likely player from Tier Two to break into the top-five. Possessing next-level vision and an underrated ability to make defenders miss, Dobbins, promises to return tremendous value in 2019 rookie drafts.

The battle for WR3 status behind Jeudy and Lamb will be a fun storyline to watch leading up to the 2020 NFL Draft. Shenault Jr. and Higgins are the current favorites for that honor, but there’s plenty of time for my 2020 dynasty rookie rankings to change.

Higgins is a tall, rangy receiver that often gets typecast as a “Mike Williams” clone due to the paw on his helmet. While Higgins also excels in jump-ball situations, the Clemson wide receiver has shown some YAC ability this season that Williams never displayed in college.

The first three players in Tier Three of my 2020 dynasty rookie rankings are talented prospects stuck in less-than-ideal on-field situations, while the last player in my updated Top-12 is an improving running back on a traditional powerhouse. Cam Akers and Bryan Edwards excelled this season despite the overall ineptitude surrounding them, while Reagor’s inclusion is talent-based after a disappointing statistical season in Fort Worth.

After battling Bo Scarbrough, Damien Harris, and Josh Jacobs for carries during his first two seasons, Alabama running back Najee Harris was finally given the reins to the backfield this season. Harris didn’t disappoint as he rushed for over 1,000 while showing significant improvement as a pass-catcher.

While Taylor and Etienne’s improving pass-catching chops gets all the love, you don’t see enough mentioned about Harris’ progress in that regard. Harris finished the 2019 regular season with a tremendous 27-304-7 receiving line after entering the season with 52 receiving yards and 0 TDs on 10 career receptions. 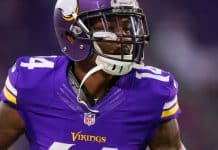 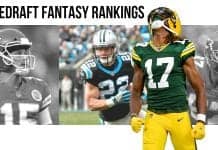 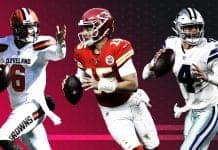