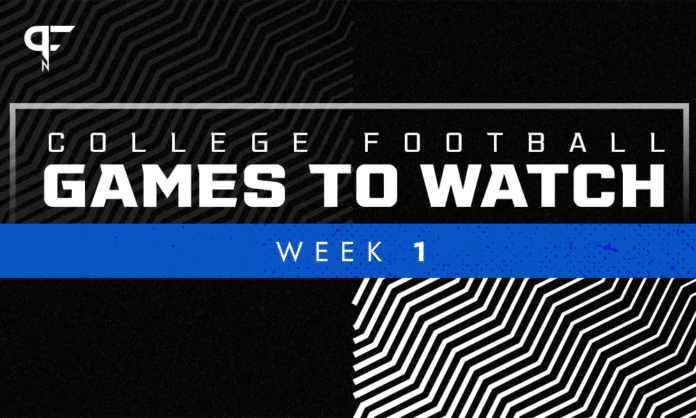 Amongst an absolute feast of college football games, we highlight some of the most delectable Week 1 matchups on the schedule.

If college football was a meal, the small slate of Week 0 games was the appetizer. Sure, it briefly staved off the hunger that has been gradually building throughout the summer, but ultimately, it left us wanting more. Well, Week 1 is the main meal, and we’re ready to gorge on a full plate of college football games. At a buffet, it’s always tricky to know where to start, so we’ve narrowed down the tastiest options for your weekend football feast.

Week 1 is the best week of the college football season. No teams are on byes, there’s football from Wednesday to Monday, and right now, anything is possible. Below is a list of the best college football games to watch in Week 1, emphasizing games with multiple 2022 NFL Draft prospects.

The scheduling gods have been incredibly kind, and one of the best games of the entire college football season is in Week 1. Fifth-ranked Georgia travels to North Carolina to take on third-ranked Clemson in a game that could have early ramifications for the College Football Playoffs. Although it’s early in the season, a defeat for either team could be a dagger in the heart of their national title tilt.

This game marks the fourth time the teams have faced each other in their college football season opener since 2000. The Bulldogs have lost just one of those games and hold a 42-18-4 advantage over the Tigers. Can they continue that trend this week?

Although Trevor Lawrence has headed to the NFL, new full-time starter D.J. Uiagalelei is highly rated within the program and was electric in relieving Lawrence last fall. With two imposing defenses, we’re set for an intriguing battle that should more closely resemble the close-fought clashes of 2002 and 2013 than Georgia’s walkovers in 2003 and 2014.

2022 NFL Draft prospects to watch in Georgia at Clemson

In addition to being a game with dramatic College Football Playoff permutations, Georgia at Clemson has potentially more 2022 NFL Draft prospects today than any other college football game. Both teams are stacked with prospects on both sides of the ball.

Georgia quarterback JT Daniels has the potential to be a riser in the class. At 6’3″, he has the prototypical size that the NFL covets at the position. Furthermore, he has an NFL-caliber arm with the ability to drive the ball to all levels of the field. If he can clean up his pocket awareness and deep-ball accuracy, Daniels should ascend in an uncertain class.

In what should be an excellent on-field battle, Clemson’s best prospect to watch in this college football game is cornerback Andrew Booth Jr. The senior defensive back is fast, fluid, and full of energy. He has insane ball skills and plays the game with the swagger and physicality befitting of the position. While there are areas for improvement, he has the potential to be a top-10 selection next spring.

The Alabama Crimson Tide starts the defense of their national title with a trip to Florida and a matchup with the Miami Hurricanes. While Miami’s up-tempo offense returns most of its starters from last fall, will a defense that lost critical components to the NFL be able to hold an Alabama offense led by new Crimson Tide quarterback Bryce Young?

With Alabama losing 10 players to the NFL Draft, there might be no better time to face the Crimson Tide. Ironically, their six first-round players tied the record held by their opponent in Saturday’s college football game. However, history is very much against the Hurricanes. Although they won in 1990, they only have three victories over Alabama and only scored double-digit points in six of 17 matchups.

2022 NFL Draft prospects to watch in Alabama at Miami

Despite this and the fact that the oddsmakers have Alabama as an 18.5-point favorite, the matchup should still be one of the most entertaining college football games on the Week 1 slate. One of the reasons for this is the depth of 2022 NFL Draft prospects on display.

Last season, Alex Leatherwood was a surprise first-round offensive lineman for the Crimson Tide. Next spring, however, there will be no surprise when Evan Neal is one of the first players off the board. The 6’7″, 360-pound offensive lineman is widely regarded as Alabama’s top prospect in the 2022 NFL Draft. Having played guard and right tackle, he’s switching to the left side for this season. Athletic, strong, and versatile, watch out for Neal on Saturday.

Just two seasons ago, Miami’s offensive line was the laughing stock of the college football world. However, the young unit has developed over the past two years. No one player embodies that development more than Zion Nelson. Miami’s left tackle skyrocketed his NFL Draft stock during last season. With another season of consistent growth, he should be considered one of the top offensive tackle prospects in the class.

LSU travels to Pasadena to take on UCLA in the Rose Bowl in the first-ever clash between two college football icons.

Having dominated in 2019, LSU was dismal last fall. Although they’ve got question marks hanging over the quarterback position following the injury to Myles Brennan, they are touted by many analysts to be one of the best teams on show this season.

However, the 16th-ranked team in the nation could be on upset alert against UCLA. The Bruins swept aside Hawaii in Week 0. They have one of the best offensive lines in the country, and Zach Charbonnet showed he is a force to be reckoned with at the running back position. LSU allowed 169 yards per game on the ground last fall. Furthermore, with 18 rushing touchdowns allowed, they had one of the most porous run defenses in the nation.

2022 NFL Draft prospects to watch in LSU at UCLA

After finishing rock bottom in the nation in passing yardage allowed per game last season, you could be forgiven for thinking people have lost their mind in describing LSU as having the best cornerback duo in college football. The Tigers allowed an average of 323 yards per game last fall, although those numbers are inflated by the opening day mauling by Mississippi State.

Despite this, they do have the consensus best cornerback in the 2022 NFL Draft class in Derek Stingley Jr. At 6’1″ and 195 pounds, Stingley has the size to play CB in the NFL. He has an insane blend of athleticism and ball skills, with an understanding of the game that makes him scheme-versatile. After last season’s disappointment, he’ll be motivated to come out this season and prove he’s the best in class.

A 2022 NFL Draft prospect with considerably more to prove is UCLA quarterback Dorian Thompson-Robinson (DTR). A preseason favorite of some to be a riser in this QB class, DTR hardly set the world on fire with his performance against Hawaii. Completing just 50% of his passes for 130 yards, the UCLA QB was off-target often and had issues consistently driving the ball downfield.

Although this game kicks off at the same time as Alabama and Miami, the all-Big Ten clash will be worth catching after the event. If the Crimson Tide and Hurricanes fail to keep it close, maybe even switch to the second half in Kinnick Stadium. This should be a close-fought matchup between an Indiana team with Big Ten-title aspirations and an Iowa program that has the potential to be a dark horse in college football this fall.

After losing to Purdue and Northwestern to open their 2020 campaign, the Hawkeyes won six straight games, including some comfortable wins over Illinois and Wisconsin. They’re carrying momentum into a clash in which they hold a 45-28-4 advantage, having also won the last three games between the two teams.

Indiana hasn’t won in Iowa since 2007. However, they’re set to return playmaking quarterback Michael Penix Jr. from injury and have the main components coming back from one of the best defenses in the Big Ten last season.

2022 NFL Draft prospects to watch in Indiana at Iowa

As well as having the potential to be a close-fought game of football, the clash between Indiana and Iowa also showcases some 2022 NFL Draft talent.

As we’ve come to expect from the Hawkeyes, their best prospect in the class comes from the offensive line. Tyler Linderbaum is an early front-runner to be the best center in the class. The redshirt junior is explosive off the snap, has incredible athleticism to impact the game at the second level, and showcases strength and understanding of winning with leverage from a wrestling background.

In a cornerback class shaping up to be deeply talented once again, don’t overlook Indiana’s Tiawan Mullen. Although he lacks prototypical NFL size at 5’10” and 180 pounds, Mullen has proven impactful in all phases of the game. His 3 interceptions and 17 pass deflections are testaments to his ball skills. Meanwhile, he’s ferocious against the run and is adept at blitzing the quarterback from the cornerback position when required.