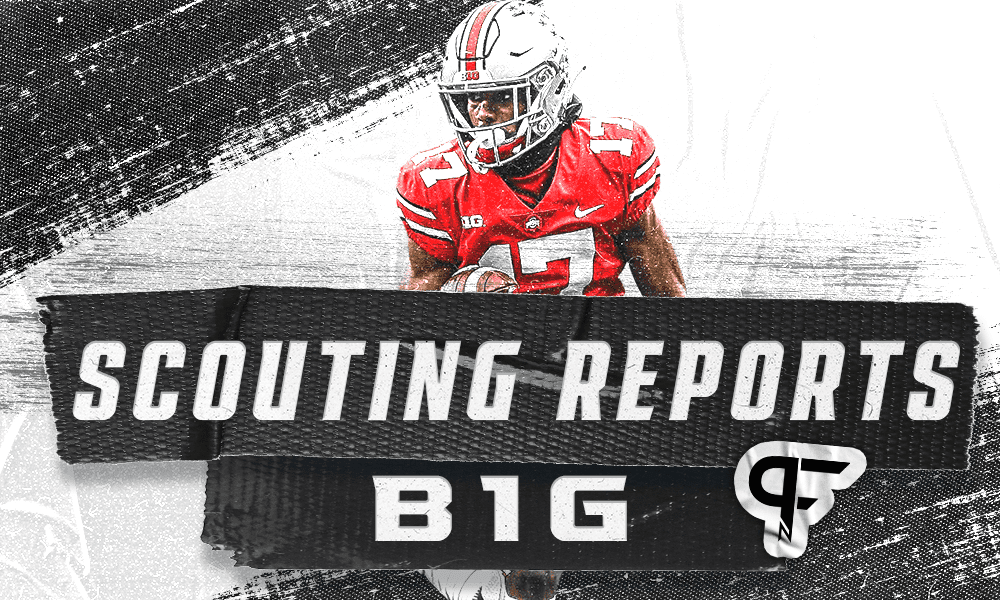 With the 2021 NFL Draft behind us and the college football season around the corner, it’s time to set our eyes on the next group of NFL hopefuls that could be available next April in the 2022 NFL Draft in Las Vegas. As such, in this edition of my annual Preseason Summer Scouting series, we’ll take a look at the draft prospects and scouting reports from the Big Ten.

All of my Big Ten previews are below. To view my grades and projected draft rounds for Big Ten draft-eligible prospects, scroll to the end of the article.

Who are the 2022 NFL Draft prospects to watch from each team in the Big Ten?

Illinois is a program under new management, as former Wisconsin and Arkansas coach Bret Bielema takes over. He inherits one of the better Illinois rosters in a long time, one that includes several draftable prospects.

Jacob Hansen, LB | Grade: 3.42 | Projected Round: 5th
Linebacker Jacob Hansen lacks great computer numbers, measuring 6-foot-1 and 238 pounds while timing in the 4.8s in the 40, but he’s a terrific football player with a great feel for what’s happening on the field. Hansen stands out against the run but also does a really good job in zone coverage.

Daniel Barker, TE | Grade: 3.39 | Projected Round: 5th – 6th
Daniel Barker is another prospect with average computer numbers, but he’s a terrific pass-catching tight end with long arms and big hands. He possesses the tools to develop into a good second tight end in the NFL.

Vederian Lowe, OL | Grade: 3.37 | Projected Round: 6th
Offensive lineman Vederian Lowe is someone I’ve liked since his sophomore season, as he’s a wide-bodied blocker who moves relatively well and shows strength at the point of attack. While he’s been a good left tackle for Illinois, I think right tackle or even guard will be Lowe’s best spot on Sundays.

The Recap
Khalan Tolson is an undersized but athletic linebacker, while underclassman Tarique Barnes is a terrific run defender. All five prospects mentioned from Illinois grade anywhere from the late fifth to early sixth round on my board, with another pair of linemen earning draftable grades.

The Hoosiers almost played for the Big Ten title last year until the conference made a last-minute rule change to ensure Ohio State played in the championship game. They are incredibly well-coached, and as a result, most of their next-level prospects are of the Day 3 variety despite their on-field success. All told, I have 11 IU players with draftable grades. However, all but Bedford are stamped as fifth-round prospects or later.

Matt Bedford, OL
Grade: 3.61 | Projected Round: 3rd
I’ve liked Matt Bedford since watching him as a true sophomore in 2019. He’s a big, powerful mauler at right tackle who displays above-average mobility for the position. Bedford is fundamentally sound, consistently controls defenders at the point of attack, and has a good amount of growth potential. I presently grade the junior as a third-round prospect.

Ty Fryfogle, WR
Grade: 3.39 | Projected Round: 5th – 6th
Ty Fryfogle surprised many when he announced he would return for his senior season, despite a sensational 2020 campaign. He’s a nice-sized possession wideout with reliable hands and a penchant for making incredible catches. He’s a terrific receiver, but his lack of quickness and speed are a concern. Therefore, Fryfogle will struggle to separate at the next level.

Devon Matthews, S
Grade: 3.38 | Projected Round: 6th
Devon Matthews is ridiculously underrated, in my opinion. He’s a safety who defends the run with great ferocity and shows next-level ball skills in coverage. Matthews can man center field, play over the slot receiver, and force the action up the field. Forty times will dictate where Matthews ends up in the draft.

In recent years, Iowa has been known to produce tight ends and offensive linemen. That trend is set to continue in the near future.

Sam LaPorta, TE
Grade: 3.90 | Projected Round: 2nd
All the draftable players on my board are from the underclassmen ranks, with Sam LaPorta atop the list. Like many of the top tight ends Iowa has recently produced, LaPorta is athletic and a terrific pass catcher with natural receiving skills. He’s not a downfield sprinter, but he has enough speed to get down the seam.

Tyler Linderbaum, G
Grade: 3.88 | Projected Round: 2nd
Center Tyler Linderbaum is the object of many an eye on the internet. While I like the junior, I don’t grade him as highly as many. He’s fundamentally sound and explosive, but he must improve his finishing strength and polish his game.

Dane Belton, S
Grade: 3.43 | Projected Round: 5th
Dane Belton is an explosive safety prospect who covers a tremendous amount of area on the field. He shows skill defending the run and covering the pass. Belton’s ability to quickly close to the play and force the action is impressive.

It’s been a struggle for Maryland since the end of the Ralph Friedgen era, and I don’t expect things to change anytime soon. Due to several grad transfers, Maryland has just two draftable prospects on the depth chart. Both can be found on offense.

Jaelyn Duncan, OT
Grade: 3.58 | Projected Round: 4th
Underclassman Jaelyn Duncan has been a terrific left tackle for Maryland the past two seasons. He has next-level size, solid footwork, and NFL strength. Duncan may be hard-pressed to stay on the left side in the NFL and could swing over to right tackle.

Dontay Demus, WR
Grade: 3.41 | Projected Round: 5th
Receiver Dontay Demus has been graded as early as a fourth-round prospect by scouts to as late as the seventh round. I personally grade the senior wideout as a late fifth-rounder. Demus has excellent size and reliable hands, and he runs solid routes for a big man. I like his upside but struggle to see him as anything other than a No. 4 at the next level.

The Big Ten is full of well-coached teams like Indiana, Ohio State, and Rutgers — programs where head coaches squeeze the most out of the talent on the depth chart. Then there’s Michigan, a team that consistently underachieves and rarely meets expectations under Jim Harbaugh.

Defensive end Kwity Paye was the first Wolverine off the board last year, as the Indianapolis Colts made him the 21st pick of the draft. Defensive linemen again lead the way for Michigan next year, starting with a pair of prospects with great bloodlines.

Aidan Hutchinson, DE
Grade: 3.84 | Projected Round: 2nd
Aidan Hutchinson is the son of Steve Hutchinson, a former Wolverine who became a great NFL player. The younger Hutchinson is not as talented as his dad, but he’s a long pass-rushing end who plays with the nasty attitude of his father. Hutchinson is quick, fast off the edge, and relentless. He needs to improve his playing strength but has an upside.

Chris Hinton, DT
Grade: 3.64 | Projected Round: 3rd
Playing strength is also something Chris Hinton needs to improve. The defensive tackle, whose dad was an eight-time All-Pro with the Indianapolis Colts — and who was part of the infamous trade that sent quarterback John Elway to the Denver Broncos — is incredibly explosive with great first-step quickness. He is fundamentally sound, plays with proper pad level, and finds a way to penetrate through the line of scrimmage to disrupt the action.

Michael Barrett, LB
Grade: 3.55 | Projected Round: 4th
Michael Barrett is an up-and-coming linebacker with a solid build and outstanding athleticism. He’s fast moving in any direction, covers a tremendous amount of area on the field, and comes with a large upside.

The skinny on Hill, Hawkins, and Gray
Safeties Daxton Hill and Brad Hawkins, as well as cornerback Vincent Gray, all grade as late-fourth to mid-fifth-round prospects. However, they all have the ability to move up draft boards if they elevate their games.