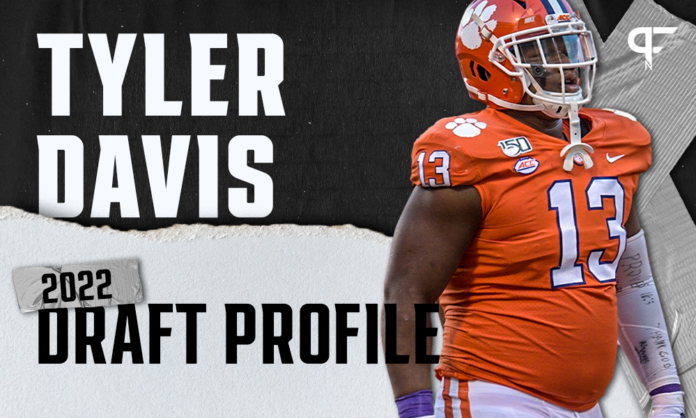 Can Clemson DT Tyler Davis' scouting report become worthy of a Round 1 selection in the 2022 NFL Draft? Let's take a closer look.

On the surface, the 2022 NFL Draft defensive tackle class doesn’t look great. But if you can count on any team to deliver when times are tough, it’s Clemson. One player in particular, Clemson DT Tyler Davis, has been producing for the Tigers since 2019, and now, his NFL Draft scouting report is a subject of great importance. Does Davis have the upside to rise in this class?

Affectionately nicknamed “Baby Dex” by his teammates (an homage to former Clemson defensive tackle Dexter Lawrence who went 17th overall in the 2019 NFL Draft), Davis has high expectations, both by his own virtue and his surroundings. Clemson has always been prolific at developing NFL talent. However, over the past seven years, their defensive line production has been near the top of the league.

Since 2015, 10 Clemson defensive linemen have been selected in the NFL Draft: Lawrence, Vic Beasley, Grady Jarrett, Shaq Lawson, Kevin Dodd, D.J. Reader, Carlos Watkins, Clelin Ferrell, Christian Wilkins, and Austin Bryant. There are hits and misses on this list, but Clemson’s record is exponentially better on the interior. That’s where Davis plays and where he’ll make his presence felt in 2021.

Standing at 6’2″, 300 pounds, Davis is naturally well-leveraged. He has an extremely dense, compact, and well-proportioned frame, and he stores a great deal of athleticism within that frame. The Clemson DT is incredibly explosive off the line, and he brings a lot of energy and twitch off the snap. Furthermore, his upper-body movements are sudden; there’s lots of potential energy stored in his frame.

Davis’ first-step quickness is extremely valuable, as it allows him to pierce through gaps and compress pocket space. Having said this, his physical prowess expands beyond that. Davis flashes impressive raw power; he can wrench open lanes on the interior even when his hands aren’t placed cleanly. Additionally, the Clemson DT has the lateral athleticism to change his rushing angles mid-rep, and he can adjust his leverage and block off ball carriers while anchored.

Davis’ anchor is also relatively strong, especially given his frame. The Clemson DT has a powerful anchor as a pass rusher, and his solid leg drive allows him to impose his power and generate movement in the trenches. Additionally, he has good grip strength in run defense, and when anchored, his power allows him to easily stand his ground. It also helps that Davis has a degree of torso flexibility, allowing him to absorb opposing power.

Davis’ athletic foundation is exciting, as the Clemson DT has a combination of explosiveness and natural leverage that’s proven to be valuable at the NFL level. He’s also surprisingly powerful for his weight, and there are very promising flashes of execution and operational progression.

Most notably, Davis’ natural twitch gifts him enormous potential with his hand usage, and this potential shows up time and time again on film. His hands can strike with force and precision, and he also flashes the ability to counter with fast, heavy hands while transferring his weight into his next rushing move.

Going further, Davis’ mentality as a rusher is exciting. He’s an urgent rusher who has the energy to convert on second-effort attempts. He’s also aggressive in run defense. Davis can use bursts of energy to quickly disengage blocks when ball carriers come near him. He then has the strength to help make the tackle.

Among other things, Davis draws a lot of double-teams with his natural strength and leverage, freeing up teammates to potentially make plays. He also has the instincts and length to deflect passes at the line. On top of that, Davis is fairly versatile on the interior. He can line up at 3-technique, nose tackle, or stunt to the edge.

As exciting as Davis is, he’s not done completing his NFL Draft scouting report just yet. He dealt with injuries often in 2020 and was rarely 100%. This impacted his development somewhat, so he’ll have more work to do in 2021.

Most of Davis’ issues relate to consistency and further refinement. The Clemson DT’s hands can be reactive (as opposed to proactive) at times. He can also be late resetting his hands when seeking to shed blocks. While he’s shown genuine flashes, Davis can be more consistent stacking counters as a pass rusher, and his hands can be a bit more clean and precise.

In addition to his hand usage, Davis can also refine his positioning and body control. He can be more consistent with his stance. His launch power isn’t as great when his feet are even with one another. Additionally, Davis sometimes plays a bit too tall. He can work to indulge his natural leverage more and keep his pads low. Davis gives up too much surface area at times when trying to splice his way through gaps.

Finally, even with his absorption capacity, Davis shows limited upper-body stiffness at times, so he can be more consistently flexible. Additionally, his length, while proportionally solid, may not be top-tier.

True to Clemson’s legacy on the interior defensive line, Davis is a promising player. He can be more controlled and focused with his motion overall, but he has extraordinary three-down potential once he pieces his game together. Davis has the explosiveness to serve as a devastating conduit for his hands, but he can do a better job transferring that explosiveness into targeted force.

Davis is still young, so most of his issues are to be expected. Most of what he lacks can be taught, and he has many unteachable traits in his arsenal. He’s explosive, twitchy, well-leveraged, and powerful. Those traits amalgamate to form an NFL Draft scouting report with tantalizing upside. As of now, Davis is a Day 2 prospect. But a Round 1 rise can’t be ruled out.

Clemson has a reputation as a top-flight talent producer, but so too does Davis as a top-flight talent. Davis was a high four-star recruit in the 2019 recruiting class. Ranked as the 58th overall prospect on ESPN’s board, Davis sported a 6’2″, 293-pound frame, with stellar athletic testing numbers. Highlighted by a 5.00 40-yard dash and a 31.2-inch vertical jump, Davis’ profile turned heads across the nation.

Hailing from Apopka, Florida, Davis received scholarship offers from some of the nation’s most prestigious programs, including Ohio State, Oregon, Georgia, and Florida. But by 2019, Clemson’s reputation preceded itself. Once Davis received an offer from the Tigers, the chance to reach his NFL potential was too much to turn away.

Davis came to a school revered for its defensive line production and essentially paced the unit as a true freshman. In his first collegiate season, the Clemson DT played in all 15 games, starting 13. Over that span, Davis logged 45 total tackles, 10.5 tackles for loss, 6 sacks, 2 pass deflections, and a fumble recovery. He was first on the defensive line in all tackle metrics and the team’s most effusive playmaker behind Isaiah Simmons.

For his play in 2019, Davis was a second-team All-ACC selection and a Freshman All-American. Davis’ freshman year yielded heightened expectations for his second campaign. Unfortunately, injuries would limit Davis to just seven games, but the Clemson DT still amassed 14 tackles, 5 tackles for loss, and 2 sacks.

Coming off a down year, 2021 is a big season for Davis. If he can get back to his 2019 form and continue to refine his game, his physical foundation could fuel a monstrous rise in the 2022 NFL Draft. The opportunity is there for Davis to become a top prospect, and he has the talent to get it done.