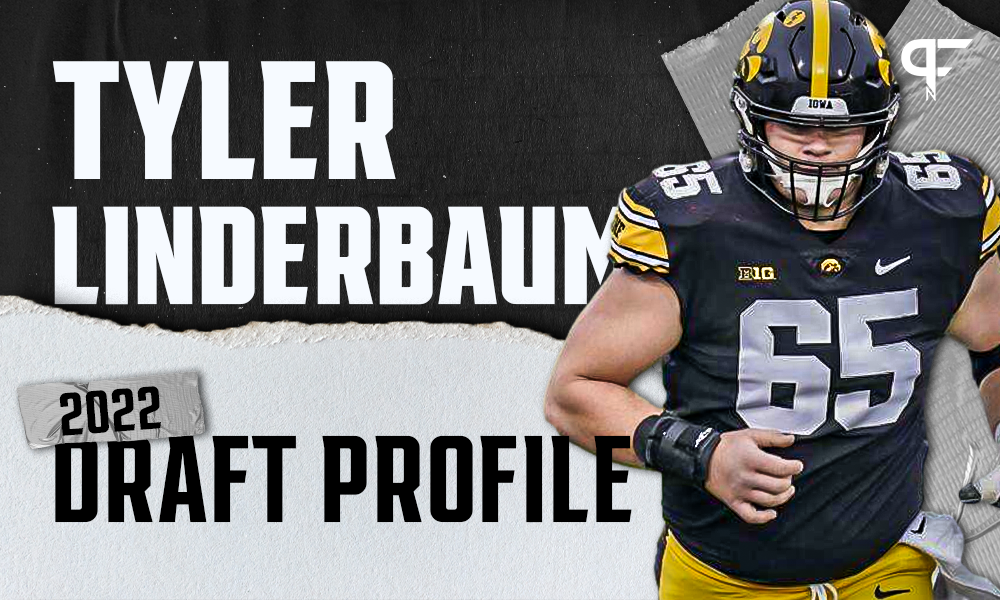 Since the turn of the century, the Iowa Hawkeyes have become a consistent offensive line conveyor belt to the NFL. They’ve had multiple offensive tackles selected in the first round but no first-round center since Dick Woodard in 1948. However, in the 2022 NFL Draft, Tyler Linderbaum is receiving early recognition as the best center in the class. Can the Iowa OC crack the first round?

Linderbaum has received recognition as one of the best centers in college football. What is it about the Iowa OC that makes him such an exceptional talent?

The first thing that stands out about Linderbaum when you turn on the tape is his athleticism. He explodes out of his stance with exceptional fluidity. Once he’s out of his stance, he’s always moving, always on his feet. Linderbaum gets out to the second level exceptionally well in the run game, easily outpacing his compatriots on the offensive line. For a guy who is listed at 289 pounds, he demonstrates phenomenal play speed.

Whether you are an offensive line expert or an untrained eye, the other thing that stands out is Linderbaum’s competitive toughness. The Iowa OC plays hards on every single play. He looks to finish his opponent on every snap, leading to some impressive takedowns away from the action.

He routinely picks up unblocked pass rushers and constantly has his head on a swivel looking for work.

Despite being on the slim side at 289 pounds, Linderbaum demonstrates incredible strength. He is rarely overwhelmed at the point of attack, giving up little ground against most pass rushers. He uses his footwork and lower body strength to provide a solid anchor in pass protection.

Linderbaum’s strength and wrestling background help him to be a man-mover in the ground game. Furthermore, he attacks well with his hands and demonstrates a good understanding of hand placement.

Linderbaum has proven to be a reliable snapper of the ball in his short career as the starting OC for Iowa. There wasn’t a single bad snap or fumbled exchange when the quarterback takes the ball under center in the games studied. This is even more impressive when considering that Linderbaum worked with two different quarterbacks during his two seasons as the starting center for the Hawkeyes.

Although Linderbaum demonstrates excellent play strength, he could use a little extra weight. The addition of a little extra bulk would help him combat the few instances of him being taken to the ground during the play.

Having only taken to the position two years ago, there is some rawness to his game. He needs to iron out some technical inconsistencies, such as the timing and placement of his hands. However, this is to be expected at such a technically nuanced position. With another year of development, it wouldn’t be a surprise to see Linderbaum consistently play at the highest level.

Linderbaum was the epitome of a do-it-all high school athlete. While attending his hometown high school in Solon, Iowa, Linderbaum took part in five sports. Quite frankly, to say he took part is doing him a disservice.

Linderbaum was an accomplished baseball player, went 53-10 as a wrestler, and threw 54 feet in the shot put. He didn’t just participate; he participated at a high level in every sport.

On the football field, however, he excelled. Like most high school players, Linderbaum played both sides of the ball. But unlike most student-athletes at that level, he dominated at each position. As a sophomore for Solon, he racked up 27.5 tackles, 6 tackles for loss, and 4 sacks.

During his junior year, he contributed 44 tackles, 7 tackles for loss, and 3 sacks as Solon won the district title. Linderbaum earned first-team All-State and District honors as an offensive lineman while being named the District Defensive MVP.

Despite his success at Solon, college football programs were hardly beating a path to the small Iowa town

Although he was named the second-best player in Iowa by 247 Sports, the three-star recruit was only ranked as the 28th defensive tackle in the 2018 recruiting class. Linderbaum earned an early offer from Iowa State and also held interest from Minnesota.

Only one team held his heart, however. When Iowa made an offer before his senior season, Linderbaum committed to the Hawkeyes, stating:

“I live 10, 15 minutes from the Iowa campus. I grew up watching the Hawkeyes. It was hard to pass them up. The coaches, the fan base, everything about it – that’s why I chose them. I couldn’t picture myself anywhere else.”

With his college football future secured, Linderbaum led Solon to another district title as a senior team captain. Despite a slight drop in production, he once again earned District Defensive MVP honors in addition to being named to the All-Iowa Elite Football Team. Furthermore, he became the first player from Solon to go to the US Army All-American Bowl.

Having been recruited as a defensive tackle despite his ability to play both ways, Linderbaum saw a limited opportunity as a true freshman in 2018. The Hawkeyes were stacked with talent on the defensive line. While the environment offered the young offensive lineman valuable opportunity to learn, he saw action in just two games — Northern Illinois and Illinois — before taking a redshirt.

During practices for the Outback Bowl that concluded Iowa’s 2018 season, Linderbaum took reps at OC. Impressing the coaches with his insane athleticism and innate understanding of leverages gained during his high school wrestling career, Linderbaum earned the starting role for the 2019 season.

Linderbaum made 13 starts at OC for Iowa in his redshirt-freshman season. The Hawkeyes went 10-3 and defeated USC in the Holiday Bowl. In his first season playing center at the college level, Linderbaum received an honorable mention for the All-Big Ten team from both the media and the conference’s coaches.

Despite the disruption of the 2020 college football season and adjusting to a new quarterback, Linderbaum emerged as a leader on the offensive line. His personal development was rewarded with first-team All-Big Ten honors and first-team All-American honors by multiple media outlets. Additionally, Linderbaum was named as a finalist for the prestigious Rimington Trophy.

While the personal accolades were impressive, Linderbaum’s performances had a profound impact on the Iowa offense. During the 2019 season, they allowed 1.77 sacks per game, ranking 44th in the nation. One year later, despite losing Tristan Wirfs, they allowed just 1.38 sacks and ranked 21st. With Linderbaum paving the way, the ground game grew from 137.6 yards per game in 2019 to 171.0 yards per game in 2020.

Linderbaum returns for another year, asserts himself as a top 2022 NFL Draft prospect

“I knew I wanted to come back for sure. I wasn’t ready to leave. There’s a lot more to do, and improve on.”

Although he feels that there is a lot to improve on, Linderbaum goes into the upcoming college football season as the best offensive center in the 2022 NFL Draft class. Moreover, he is one of the most impressive offensive linemen of any position in the class. The positional value may hamper the potential to be a first-round selection. However, there’s no doubting that the Iowa OC has first-round talent.