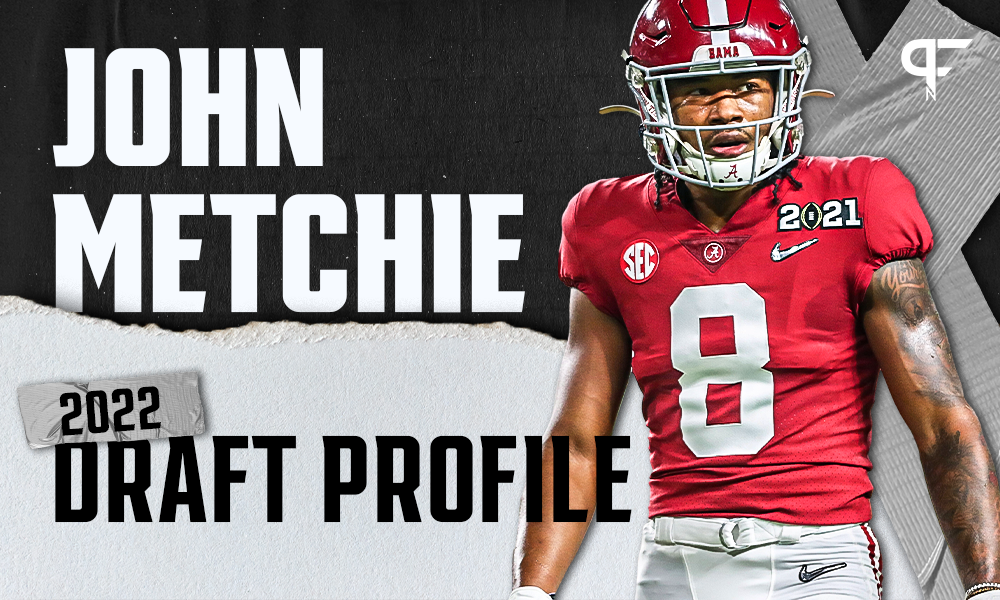 Alabama wide receiver John Metchie III has traveled a very different road to the NFL Draft than his Crimson Tide contemporaries. However, much like Jaylen Waddle, DeVonta Smith, and the very many before them, Metchie is already earning first-round consideration ahead of the upcoming college football season. Let’s take a look at Metchie’s scouting report. Is it simply a case of scouting the helmet, or does the Crimson Tide pass catcher own the skill set to hear his name called on Day 1 of the 2022 NFL Draft?

With the Alabama WR receiving early attention in the 2022 NFL Draft class, let’s start with what Metchie does well.

Metchie is a genuine speed threat at the wide receiver position. He can get downfield in a hurry, and once open, there’s very little chance that he’s going to be caught. His speed gives him the ability to create and maintain separation at all three levels of the field.

In addition to his speed, Metchie displays impressive route-running ability. He exhibits quick football work and excellent change of direction, which enables him to fake out coverage, allowing for even greater separation. But Metchie is not just a downfield threat; he is equally adept at coming across the middle on slant routes.

Due to his speed and route-running ability, he poses a versatile threat to the entire field and from multiple alignments. The Alabama WR has lined up across the formation for the Crimson Tide, including in the backfield. The danger Metchie presents with his speed allows Nick Saban to use him on motion plays like fake jet sweeps — giving them additional options to create diversion and confusion.

Although he isn’t a physical specimen like Treylon Burks in this 2022 NFL Draft class, Metchie can more than hold his own as a blocking wide receiver. He is willing and able, and there are multiple examples in the games studied of him actively moving men towards the sideline or downfield.

Finally, his ability to cradle in an over-the-shoulder catch is a wonder to behold.

Are there areas that could prevent Metchie from becoming a first-round receiver in the 2022 NFL Draft?

Although he demonstrates some physicality in downfield blocking, there are some issues with his physicality pertaining to being a pass catcher. There were multiple examples of the Alabama WR failing to secure the ball in contested catch situations. In addition, he didn’t routinely hold onto the ball through contact.

Furthermore, Metchie doesn’t always fight his way through traffic with ease in the middle of the field. There were several examples where he would bump into defenders and even his teammates while running his route.

Those physicality issues may cause problems when faced with an increase in press coverage in the NFL, something he hasn’t been subjected to so far in his two-season collegiate career.

Metchie’s path to the NFL Draft began far from the Las Vegas strip, where he’ll potentially hear his name called next April. Born in Taiwan, his family moved to Ghana when he was just a small boy. At the age of six, the family uprooted for a second time, making the long journey to Canada. It was there that Metchie discovered a love of football that would ultimately entail further family upheaval.

St. James High School in Maryland is famous for helping Canadian players break into the American football scene. Aware of its notoriety, Metchie made it his mission to make it to Maryland. Once established there, the speedy pass catcher set about achieving fame of his own. During his four seasons at St. James, the versatile offensive weapon racked up 1,300 rushing yards, 2,500 receiving yards, and 42 total touchdowns.

An ascending four-star prospect, Metchie held offers from over 20 programs. Although his early offers came from FCS and Group of Five programs, major FBS schools weren’t far behind. Eventually, he would narrow it down to Penn State and Alabama, with the Crimson Tide winning the battle to land the Canadian pass catcher.

“An offer from the national champions means a lot,” he said on announcing his commitment. “It doesn’t get more competitive than that. I really love how bought in the players are how they are all hard working.”

Hard work had become a considerable part of Metchie’s appeal, but there would be more to be done before he could arrive in Tuscaloosa. As part of his recruitment, Alabama had suggested he spend a year at a prep school, so he spent some time at The Peddie School in Hightown, New Jersey.

Metchie had cited the level of competition as a deciding factor in coming to Tuscaloosa, and nowhere defines competition more than the Alabama wide receiver room. He arrived in 2019 in a unit that contained Jerry Jeudy, Henry Ruggs III, as well as Smith and Waddle. As a result, Metchie’s potential for playing time would be minimal.

Nonetheless, he opened eyes at the Alabama spring game, snagging 8 catches for 104 yards. The performance allowed him to see playing time in 13 games as a true freshman. Moreover, he secured his first career catch against Duke while adding further receptions against Southern Miss, Arkansas, and Western Carolina; 4 receptions for 23 yards might not sound like a lot, but it set the basis for a standout sophomore season.

It’s easier to say that Metchie was a beneficiary of Waddle’s regular-season-ending injury against Tennessee. After all, the sophomore sensation racked up 151 yards on 7 receptions on the day Waddle went down. However, Metchie already flashed his skill set in a win over Texas A&M. The Alabama WR was named the team’s Offensive Player of the Week after securing 181 receiving yards and 2 touchdowns at a remarkable 36.2 yards per catch.

Metchie emerged as a reliable big-play threat for the Crimson Tide. The Alabama WR secured a first down or a touchdown on 64% of his receptions during his sophomore campaign. Unafraid of the limelight, he contributed 81 yards in the national championship win over Ohio State. He ended the season with 916 receiving yards and 6 touchdowns, winning the Jon Cornish Trophy as the best college player from Canada, and drew remarkable praise from Alabama head coach Saban:

“This guy is the epitome of what you look for in a wide receiver. He is tough, he plays hurt. He gets open, he makes catches, he makes plays.”

There will be a multitude of NFL teams looking for a wide receiver in the 2022 NFL Draft. Will Metchie be their man? If they decide that he is, they might not want to wait too long to secure him. Reportedly, some scouts already have the Alabama WR ahead of his former teammates Smith and Waddle as he heads into his junior season with the Crimson Tide.