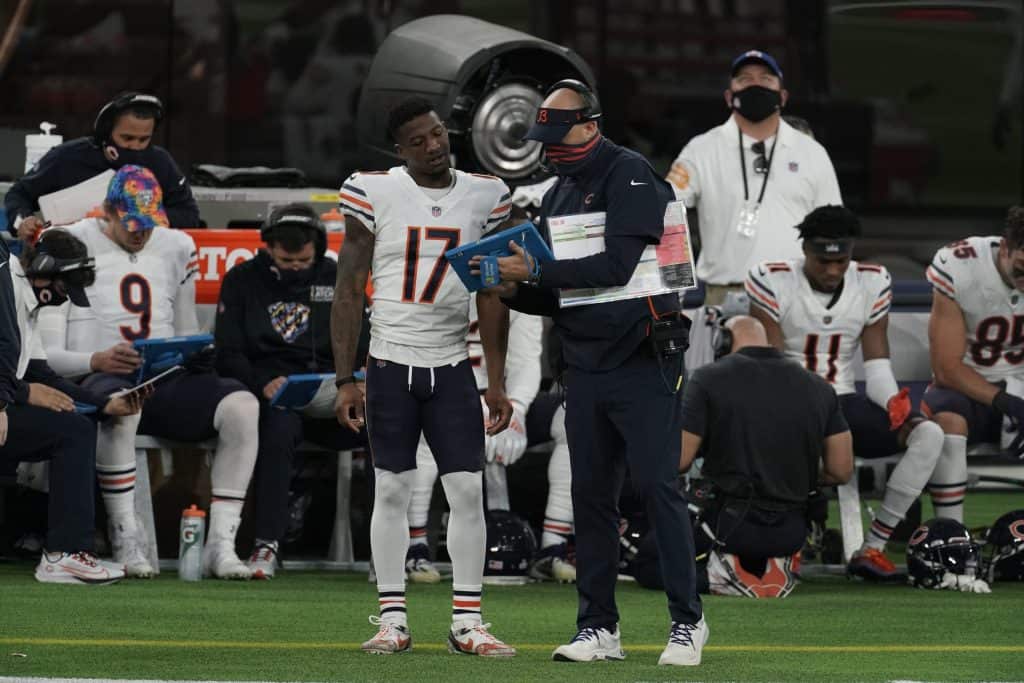 Oct 26, 2020; Inglewood, California, USA; Chicago Bears head coach Matt Nagy talks with Chicago Bears wide receiver Anthony Miller (17) in the first half against the Los Angeles Rams at SoFi Stadium. Mandatory Credit: Kirby Lee-USA TODAY Sports
What's in this article? Click to show
The Chicago Bears are expected to go after a QB in one of the first two rounds
Which QB options could be on the board for the Bears in the 2021 NFL Draft?
Could the Bears add a QB later in the draft?
Want more 2021 NFL Draft prospect news? Want to do your own mock draft?

In the 2021 NFL Draft, rumors are swirling around a number of teams searching for their next quarterback, including the Chicago Bears. On the April 14 Draft Insiders show, Pro Football Network’s Chief NFL Analyst Trey Wingo and Chief Draft Analyst and NFL Insider Tony Pauline discussed the latest news and rumors surrounding the Bears’ search for a QB.

Be sure to join PFN Chief NFL Analyst Trey Wingo and Chief Draft Analyst Tony Pauline every week on Draft Insiders as they break down all you need to know heading into the 2021 NFL Draft. Subscribe to our PFN YouTube channel and hit the notifications icon so you can tune in live every Wednesday at 9 PM ET.

With the QB position a hot topic currently, Pauline discussed the latest he is hearing out of the Bears organization.

“One of the teams I’m told that is a realistic possibility to trade up is the Chicago Bears, who want to trade up to get a quarterback.”

With five QBs considered potential top-10 options, the Bears may have to make a significant move. Moving from No. 20 to inside the top 10 is likely to cost at least one future first-round pick. Presumably, the Bears will have to pay two future first-round selections and potentially some later-round capital as well. If that is the case, then Chicago may opt to fall back on targeting a QB in the second round.

Which QB options could be on the board for the Bears in the 2021 NFL Draft?

With no quarterbacks being regularly projected as mid-first round selections, the options for Bears GM Ryan Pace fall into two categories: 1) the players they will need to move up for, and 2) the players that should be available in the second round.

Who could the Bears be looking to trade up for?

Two weeks away from the 2021 NFL Draft, the top two selections appear to be largely set in stone. Trevor Lawrence is a lock to go to the Jacksonville Jaguars, and Zach Wilson is expected to be drafted by the New York Jets. With the third overall pick, the discussion is the San Francisco 49ers will take either Justin Fields or Mac Jones. However, with no clear landing spot for the player not selected by the 49ers along with Trey Lance, the Bears could move up into the back half of the top 10.

With Andy Dalton and Nick Foles under contract for 2021, the Bears could consider Lance. Having two veterans on the roster would allow Lance to develop behind two experienced mentors. Yet, any of the three potential options could be in play for the Bears if they do secure a trade into the top 10. In Pauline’s latest big board, Fields ranks 8th, Lance is 18th, and Jones is 23rd.

After the top five prospects, there appears to be a significant gulf in talent at the QB position. Following Jones, no further QB is ranked inside Pauline’s top 50 on his current big board. There are then three QBs ranked between 53rd and 76th, before another drop off to Jamie Newman at 201st.

Texas A&M QB Kellen Mond is an intriguing option. Briefly discussed as a first-round selection, he appears destined to be selected in the second round. Still, he could be an early second-round selection, meaning the Bears would need to trade up from their spot at No. 52. Doing so would be significantly cheaper than making a move in the first round. Mond’s upside is undeniable, and he could benefit from a year of learning behind Dalton and Foles.

At 60th on Pauline’s big board is Florida QB Kyle Trask. At times during the 2020 season, it seemed Trask would elevate himself into the first-round conversation. However, as a traditional pocket passer, he is limited in terms of schemes he can run. The current Chicago QBs are not known for their mobility, so it is not unreasonable to think this could be a landing spot for Trask. The added concern with Trask is his arm strength, which is solid but not among the best in the class.

Davis Mills wounds out the next group on Pauline’s board at 76th. Mills is the latest player to be receiving first-round discussions. On the other hand, he is an unpolished QB who is going to require development. Therefore, speculation is he will be drafted in the second round. Mills possesses all the traits to be a successful NFL QB but needs time to develop. Having started just 11 games at Stanford, he also needs more reps on the field. For that reason, he may not be the ideal QB for Chicago, where he will have to sit the majority of the 2021 season.

Could the Bears add a QB later in the draft?

The fall-off in talent after the Mond, Trask, and Mills trio is significant. No other quarterback is graded higher than a sixth-round selection on Pauline’s board. Newman (201st), Ian Book (233rd), Sam Ehlinger (240th), Shane Buechele (253rd), and Feleipe Franks (260th) all have draftable grades. Yet, they are all viewed as backup QBs at the next level.

Newman possesses plenty of potential but missed the 2020 season after opting out. Franks is the prototypical tall signal-caller that teams have coveted. Conversely, he owns just one season of high-end QB play in college. All five will need time to develop in the NFL. For that reason, they could be intriguing project QBs for a team with a more settled situation at the position. Unfortunately, the Bears do not have that luxury with Dalton and Foles expected to be in their final year in Chicago.