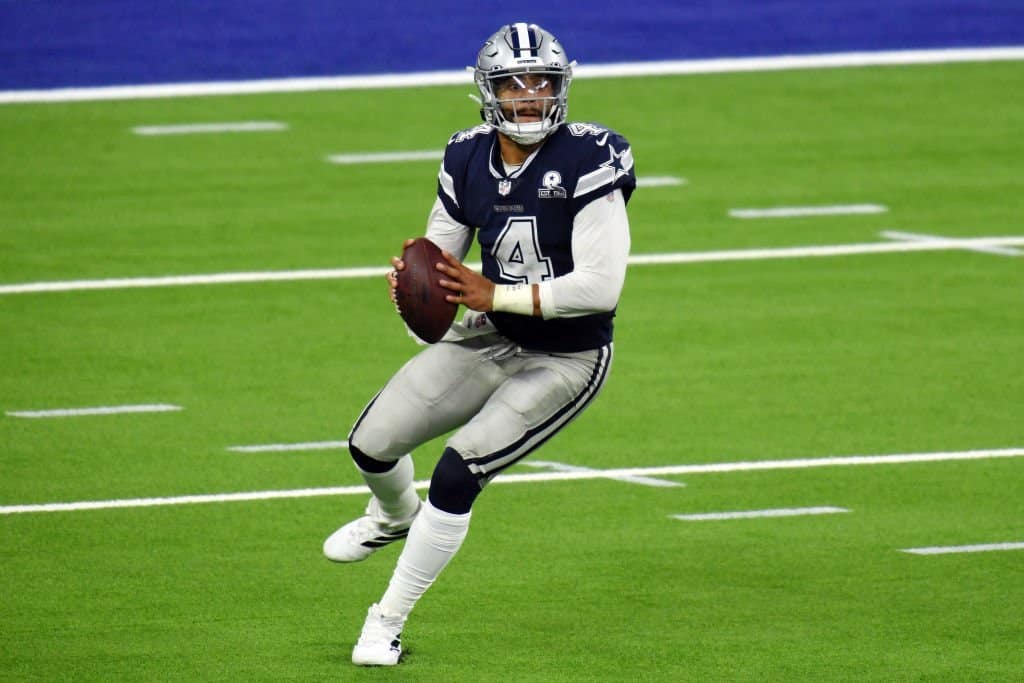 INGLEWOOD, CALIFORNIA - SEPTEMBER 13: Dak Prescott #4 of the Dallas Cowboys looks to pass during the fourth quarter against the Los Angeles Rams at SoFi Stadium on September 13, 2020 in Inglewood, California. (Photo by Harry How/Getty Images)
What's in this article? Click to show
Could Dak Prescott get the franchise tag again in 2021?
Which other players on offense could get the franchise tag in 2021?
Which players on defense could get tagged this offseason?
Want more NFL news and analysis?

Could Dak Prescott get the franchise tag again in 2021?

The Dallas Cowboys paid Dak Prescott $31.4 million in 2020 to play on the franchise tag. The two sides could not agree on a long-term deal before the July 15 deadline, meaning Prescott was locked into playing on the franchise tag last season. Prescott played four full games this season before being injured against the Giants.

Related | NFL Franchise Tag: What it is and how it works

In those five games, Prescott was completing passes at a career-high rate of 68 percent. He was also on pace to throw for over 6,000 yards and 30 touchdowns. Prescott’s injury has certainly made the franchise tag in 2021 a likely occurrence. It would allow the Cowboys to see how Prescott recovers from injury while also keeping him on the field for them in 2021.

The primary concern is the cost of a franchise tag. As this would be Prescott’s second consecutive franchise tag, he would earn 120 percent of his salary last year. Therefore, Prescott would reach $37.7 million by playing on the franchise tag in 2021. However, given Prescott is expected to earn around $40 million a year on a new contract, the franchise tag’s cost is not that exorbitant.

The only caveat is that if the Cowboys sign Prescott long-term, they would have more control over his 2021 salary cap number. With the salary cap projected to be around $175-185 million, the Cowboys could reduce Prescott’s cap number significantly in 2021. That would allow them to build their team around Prescott in an attempt to compete in the 2021 NFL season.

Which other players on offense could get the franchise tag in 2021?

With several talented players set to be unrestricted free agents, which two stand out as potential franchise tag candidates in 2021?

The relationship between the Bears and Allen Robinson has become somewhat frosty. Last offseason, Robinson expressed his frustration at not having received a long-term extension.

While the 2021 franchise tag value for wide receivers is set to be around $16.4 million, Robinson would be set to earn $17.88 million due to the 120 percent of the prior year’s salary rule. Yet, this is still well below market value for a top-end wide receiver like Robinson. Additionally, the Bears would not have to commit long-term to him at this stage.

Another option would be to give Robinson the transition tag and save around $2.2 million. However, given the relationship between Robinson and the Bears, a lengthy holdout could ensue if he does receive the franchise tag in the coming weeks.

Like Prescott, Scherff played under the franchise tag in 2020. Therefore, he would be a costly player to retain on the franchise tag in 2021 at $18 million. Washington should be making every effort to secure a long-term extension. However, keeping one of the best interior linemen on the books for another season is a good last resort.

Ultimately, Washington could attempt to use the franchise tag to buy more time to negotiate with Scherff. They have the cap space, but they may require more time to get a deal done with a disjointed offseason on the horizon.

Which players on defense could get tagged this offseason?

The upcoming defensive free agency class is packed with stars. Which players may not make it to free agency if they get the franchise tag in 2021?

Williams had a super year in 2020, landing him on the PFN All-Pro defense. However, he has seen mixed results during his career, making a long-term deal a tough decision. Therefore, the Giants may wish to buy themselves more time with a second-straight franchise tag.

Williams would be paid an exorbitant $19.4 million in 2021 on the franchise tag. Even with the Giants short on cap space, that may be better than committing around $17 million per year over a four or five-year deal to a player who only has one great year so far in his career.

Barrett is the fourth name on this list who could receive a second consecutive franchise tag in 2021. After 19.5 sacks in 2019, Barrett managed just 8 sacks in 2020. However, he managed to rack up an impressive 42 pressures and was integral to the Buccaneers’ Super Bowl victory. The Buccaneers’ issue is that Barrett will be looking to be paid like a top-tier defensive end.

Given he has just one double-digit sack season, the Buccaneers may be hesitant to commit. Therefore, they could give him the franchise tag again in 2021 to buy more time.

With Tom Brady having one year left on his deal, that would be perfect for the Buccaneers if they are looking to go again in 2021. They can keep their defensive line intact without having to commit to Barrett beyond the life of Brady’s deal. Doing so will be costly at around $19 million, but it could be a sensible strategy long-term.