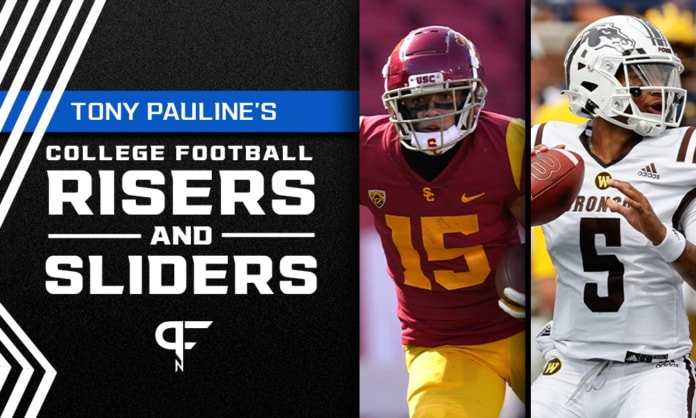 Who are this week's college football risers and sliders following Week 3? Which 2022 NFL Draft prospect's stock report changed the most?

Week 3 saw several competitive contests as No. 1-ranked Alabama squeaked by SEC foe Florida 31-29. Clemson, Oklahoma, and Ohio State were nip and tuck with lesser opponents while Georgia won big. On the NFL Draft front, Week 3 risers have a decidedly offensive flavor as quarterbacks, running backs, blockers, and pass catchers all made the list. Whose 2022 NFL Draft stock report changed the most during Week 3? Let’s dive in.

Who are this week’s risers following Week 3 of the college football season?

During my WMU preview this summer, I mentioned the fondness NFL scouts felt towards Eleby’s game. He continues to impress next-level decision-makers, turning in a splendid performance against Pittsburgh. Helping engineer his team to a 44-41 victory, Eleby completed 22 of 35 passes for 335 yards with 3 TDs. Eleby has yet to toss an interception this season.

The junior is a smart, athletic quarterback who makes plays with his legs and arm. Presently graded as a third-round prospect on my board, Eleby is giving serious thought to entering next April’s draft.

It looked like it was going to go from bad to worse for USC. After surprisingly firing head coach Clay Helton two games into the season, the Trojans found themselves down 14-0 to lowly Washington State. Enter Drake London. The dominant receiver almost carried (or caught as it may be) the Trojans to victory.

His final totals included 13 receptions, 170 yards, and 2 TDs. Most impressively, London’s production came at the arm of the Trojans’ backup quarterback as starter Kedon Slovis left the game with an injury after just 2 passes.

London is more than just a big possession receiver who wins contested throws. He’s a silky smooth wideout who finds ways to separate from defenders and catches everything thrown in his direction. I presently grade London as an early second-round prospect. Based on everything I’ve been hearing, I fully expect the junior to enter the 2022 NFL Draft.

The game was much closer than the final score of 38-24, with Cincinnati edging Indiana. Yet, even in defeat, Bedford looked terrific. The big offensive lineman looked seamless after moving to guard from the offensive tackle spot he’s held down the past two seasons.

A wide-bodied lineman who blocks with terrific fundamentals, Bedford displayed outstanding power and surprising athleticism. He annihilated defenders blocking in motion just as easily as he held the point on the line of scrimmage. I gave Bedford a Day 2 grade over the summer, and he looked every bit a top-100 pick against Cincinnati.

Pierce had solid numbers, catching 5 passes for 86 yards and 1 TD. What stood out were the number of big-time receptions Pierce came away with, including an incredible 19-yard TD catch that put Cincinnati up for good. Pierce is long (6’3″) with nice size (210 pounds) and sneaky speed. Some scouts grade the senior as a legitimate middle-round pick.

Many believed McBride would enter the 2021 NFL Draft and were surprised when he returned to Colorado State. Entering this season, the productive tight end was universally graded as a potential late-third/early-fourth-round prospect.

The senior has been on fire this year, posting 100 or more receiving yards in each of the Rams’ three games. During his team’s first victory on Saturday against Toledo, McBride finished with 9 catches for 109 yards. He is a natural pass catcher with excellent tight end size. Speed is an issue and will dictate where he lands next April.

Numbers aside, Brown answered many concerns scouts had about his game — but let’s start with those numbers. The senior rushed for 161 yards on 19 carries with 1 TD. The 80-yard dash answered a few concerns about his speed. He also caught 3 passes for 35 yards, giving him 9 receptions in three games, gaining confidence in his hands.

Brown is not the flashiest ball carrier but a tough grinder who runs with great vision and intelligence. He’ll be a solid late-round pick who’ll make a roster as a fourth back.

Arriving at Louisville after transferring from Alcorn State, Cole has made the seamless transition to big-time college football. During the Cardinals’ hard-fought victory over Central Florida and their explosive offense, Cole accounted for 6 tackles, including 1 TFL and 1 pass breakup. For the season, Cole has 19 tackles in three games. He’s a stout safety who stands out defending the run and carries a sixth-round grade on my board.

Sacramento State stayed close to Cal, but in the end, fell 12 points short by a score of 42-30, despite an impressive effort by Williams against a stout secondary.

Williams finished with 8 receptions, 121 yards, and 1 TD. The prior week, Williams totaled 9 catches and 122 yards against Northern Iowa. He is a nice-sized wideout (6’0″, 205 pounds) who runs solid routes and possesses reliable hands. He was graded as a street free agent by scouts, who now must reevaluate the unstoppable small-school receiver.

Whose NFL Draft stock took a tumble after Week 3?

Entering the season, Mason was graded as a potential fifth-round prospect by scouts, but he’s been nearly invisible the past two weeks. Against Clemson on Saturday, he carried the ball 9 times for 20 yards. The prior week against Kennesaw State, he totaled 11 yards on 6 carries. Jordan had a terrific sophomore campaign in 2019, posting 899 rushing yards and 7 TDs. Yet, his game has regressed since.