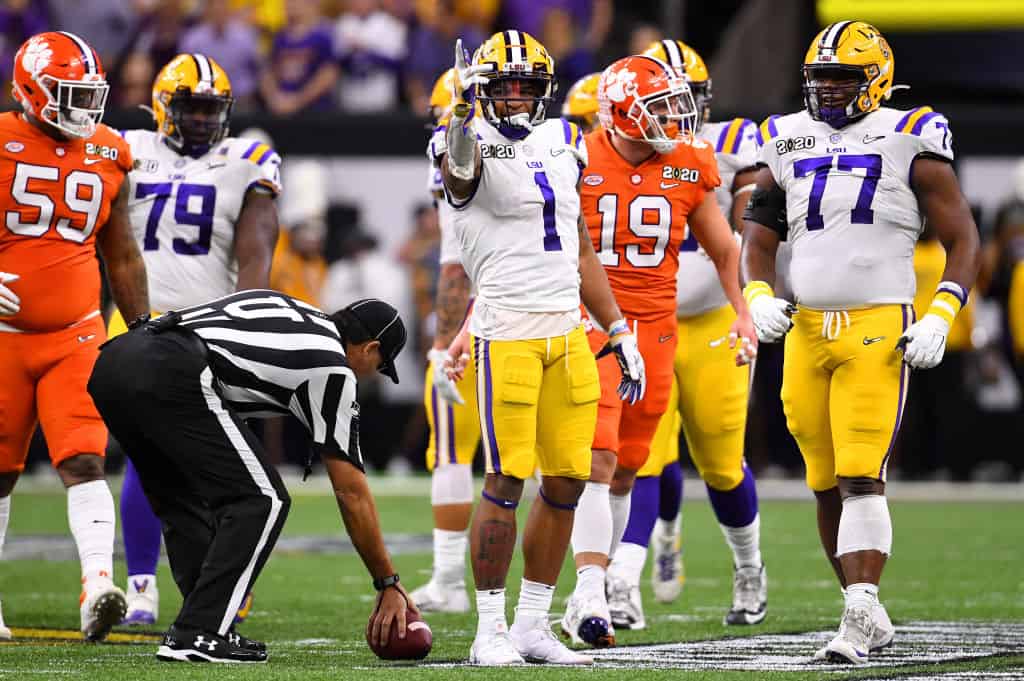 NEW ORLEANS, LA - JANUARY 13: Ja'Marr Chase #1 of the LSU Tigers celebrates a first down against the Clemson Tigers during the College Football Playoff National Championship held at the Mercedes-Benz Superdome on January 13, 2020 in New Orleans, Louisiana. (Photo by Jamie Schwaberow/Getty Images)

With the cream of the college football crop rising to the top and the NFL landscape becoming clearer as we head into late November, we are starting to get a better idea of how the 2021 NFL Draft may unfold — making it the perfect time to introduce you to my initial first-round 2021 NFL Mock Draft.

The annual selection event always throws out some curveballs, however, and there are more variables this year than ever before. With players afforded an extra year of eligibility and some of the prestigious All-Star games falling victim to the ongoing global situation, this year may be the hardest ever to predict. That won’t stop us from trying, though, so let’s get into it.

For this first-round 2021 NFL Mock Draft, all picks have been made by PFN’s Senior NFL Analyst Matt Williamson. Analysis of each pick has been written by PFN NFL Draft analyst Oliver Hodgkinson.

For all the uncertainty that 2020 has thrown at the world of football, there is nothing more certain than this scenario. When Roger Goodell puts the New York Jets on the clock to open the 2021 NFL Draft, they will run the card up to the (virtual?) podium with Trevor Lawrence’s name etched on it, as it has been since the clear abandonment of Sam Darnold as the face of the franchise.

Trevor Lawrence has been the number one overall pick in waiting since the moment he set the college football world alight as a true freshman. He started this season in imperious fashion, and his on-field impact has never been more clear than in watching Clemson struggle to a narrow win over Boston College and then fall to Notre Dame during his absence.

Standing at 6’6″ and weighing in at 220 pounds, Lawrence has the ideal size, arm strength, and mobility required to succeed immediately in the NFL. The Jets can feel comfortable putting him straight into action with blindside protector Mekhi Becton being arguably the best player on their roster during his rookie season.

With former sixth-round NFL Draft pick Gardner Minshew struggling in his second year as the starting quarterback for the Jacksonville Jaguars, it appears that “Minshew Mania” is over. The Jags are currently 1-8 with a combination of Minshew and Jake Luton under center, and although the blame can’t be laid fully at their door, there is a definite need for change at the quarterback position for one of the lowest-scoring offenses in the 2020 NFL season.

The first move for the Jags in this first-round NFL mock draft is to provide the solution to their quarterback quandary with Ohio State star Justin Fields. The transfer from Georgia impressed in 2019 with a 41:3 touchdown to interception ratio leading him to third place in the Heisman vote. He has continued to improve in a limited sample size early in the 2020 college football season, showcasing NFL caliber throws, good decision making, and providing a red zone threat with his mobility as a dual-threat quarterback.

Just two years after selecting Dwayne Haskins in the first round of the NFL Draft, the Washington Football Team finds themselves in the position of looking for his successor. It is clear from their actions this season that Haskins doesn’t figure in their future plans, and although Alex Smith’s comeback from a near career-ending injury has been the fairy tale story of this 2020 NFL season, he doesn’t represent the future of the franchise at the quarterback position.

That is why in this first-round NFL mock draft, I have provided Washington with their franchise signal-caller in North Dakota State’s dual-threat phenom, Trey Lance. Don’t be fooled by the media over-reaction to Lance’s one-game showcase against Central Arkansas back in October; this kid can play football. It would be incredulous to suggest that the year of tape that he put together during an incredible redshirt freshman campaign would be instantly overridden by one game in the most disrupted of circumstances.

Of course, there are areas of his game to work on, but nonetheless, he has all the tools to succeed in the NFL. Washington fans should be particularly excited to see an offense that contains the explosive rushing threat in the backfield of Lance and Antonio Gibson. The triplet of Trey, ‘Tonio, and Terry McLaurin could become one of the best in the NFL.

As Dak Prescott recuperates from a season-ending injury, his future with the Dallas Cowboys remains unclear. The former fourth-round pick out of Mississippi State was playing on the franchise tag this year, and there are no guarantees or indications about how his contract scenario plays out. The Cowboys could be in the market for a quarterback in the 2021 NFL Draft, especially if they are in a position to take one of the top three options, as they are in this first-round NFL mock draft.

Without a doubt, the biggest need for the Cowboys next April, however, is on the defensive side of the ball, with the secondary being a particular area for concern. The Cowboys have allowed the third-most passing yards in the NFL so far this year and the fourth-most passing yards per game. That is particularly concerning given the dire offenses they have faced in the NFC East.

Patrick Surtain II offers an instant upgrade at the cornerback position. He combines prototypical size at the position with good ball skills and an ability to create turnovers in a multitude of ways. He has become the leader of the Alabama secondary this year, adding leadership to his resume. The son of a former Miami Dolphins legend, Surtain II comes complete with an NFL pedigree and is one of the top cornerback prospects in the 2021 NFL Draft.

Penei Sewell has everything that you want in an NFL offensive tackle, and then some. Athletic, strong, and dominant, Sewell plays strong against pass rush whilst being extremely impactful in the ground game. He hasn’t played in 2020 after opting out of the college football season. If we’re honest, there was nothing left for him to prove, and he has avoided the risk of a career-altering or ending injury by sitting this season with no detriment to his NFL Draft stock.

Although the Chargers offensive line play has shown small improvement this season, securing Sewell to protect Justin Herbert will be the best piece of business general manager Tom Telesco does in 2021.

The future of the Miami Dolphins is exceptionally bright. They have seen immediate returns from several rookies so far this season and have an arsenal of 2021 NFL Draft picks to play with. The defense has been particularly impressive this season, and with that unit being the driving force behind their success, the Dolphins have an immediate need to provide Tua Tagovailoa with wide receiver weapons. They fill that need in this first-round NFL mock draft.

Chase won the 2019 Biletnikoff Award for the best receiver in the nation as his production helped LSU to a National Championship. He provides a genuine deep threat, with phenomenal catching skills and a physicality that makes him difficult to take down with the ball in his hands. Chase has the ability to win every time, making him a dangerous playmaking threat in the NFL.

Despite drafting three linebackers in the last year’s NFL Draft, the Cincinnati Bengals defense hasn’t seen the uptick in performance that they would have expected. Although it is extremely early to call time on those selections, there is no doubt that the Bengals need to upgrade a unit that has been particularly porous against the run. They’ve allowed the fourth-most rushing yards per game in the NFL so far this season.

If you want a graphic example of the impact former Penn State linebacker Micah Parsons has on a defensive unit, then look no further than the horror show that has been the Nittany Lions this season. They currently sit 0-4, unable to stop anyone while struggling to get anything going on offense.

Parsons is a tough-tackling, sideline to sideline machine who uses his size, strength, and athleticism to be a disruptive force at the line of scrimmage as well as being highly skilled in pass coverage. The Bengals get exactly what they need in this first-round NFL mock draft.

The New York Giants defense has been consistently torched through the air this season, giving up the fifth-most total passing yards, eighth highest passing yards per game, and the second-most yards after the catch through nine games. Although James Bradberry is one of the most underrated cornerbacks in the NFL, the play on the opposite side to him has been sloppy at best, bordering on disastrous at times.

In this first-round NFL mock draft, the Giants get an instant upgrade in Virginia Tech cornerback Caleb Farley. One of the most productive cornerbacks in college football prior to opting out of this season due to health concerns, Farley’s hand skills are everything that you’d expect from a player who committed to the Hokies as a wide receiver. He has the size and speed to compete with the best wide receivers in the NFL.

Has any one player done more to enhance his 2021 NFL Draft stock than Kyle Pitts during an incredible start to the season for the Florida Gators? Pitts has snagged eight touchdowns in five games and racked up 414 yards at 17.3 yards per reception. He leads Florida in both touchdowns and receptions despite being surrounded by ascending playmakers like Kadarius Toney and Trevon Grimes.

Pitts would provide that receiving threat from the tight end position that the Carolina Panthers have sorely missed since the departure of Greg Olsen. Let’s not forget that Olsen had back to back to back 1,000+ receiving yards season at the height of his career. At 6’6″, 240 pounds, Pitts has the height if not the frame of Olsen. Although Pitts has incredible athleticism and catching skills, he may fall short when called upon as a physical blocker in the NFL.

Gregory Rousseau rose to prominence in 2019 following a redshirt freshman season that saw him finished second in the nation for total sacks and sacks per game behind the eventual second overall selection of last year’s NFL Draft, Chase Young. Teams will gamble on Rousseau’s athletic upside, versatility, and college production, even though he is far from being the finished product.

In this first-round NFL mock draft, he lands on an Atlanta Falcons that is in desperate need of pass-rush production. Former first-rounder Takkarist McKinley left the team recently, and they are light on real quality depth. Although the Falcons have one of the highest quarterback pressure rates in the NFL, they haven’t been able to consistently turn that into sacks, and the secondary is subsequently taking a beating this season.