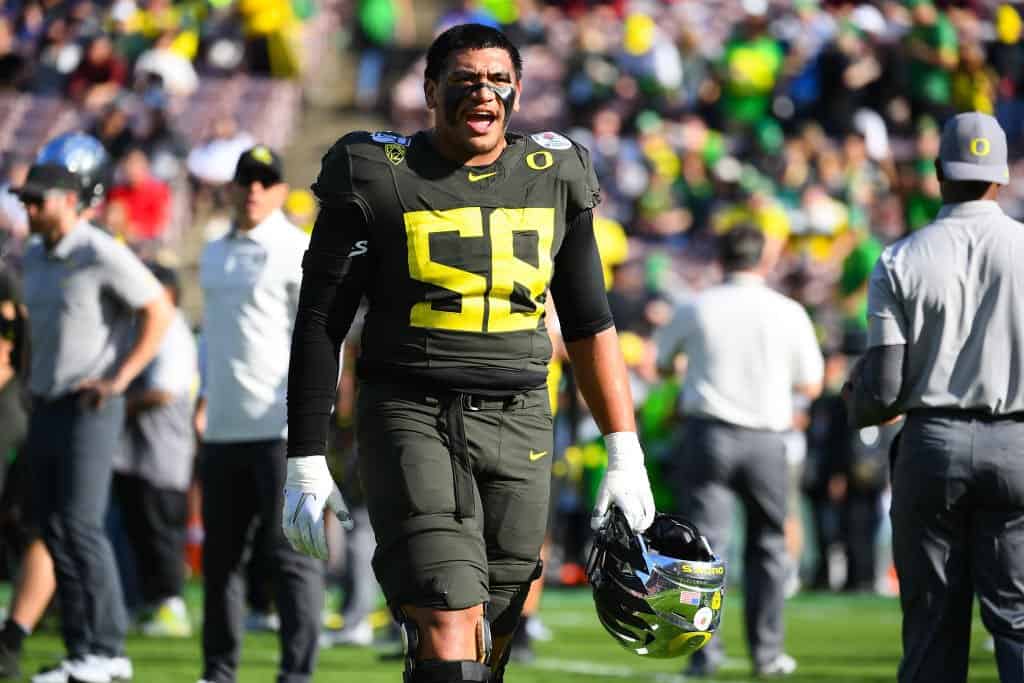 PASADENA, CA - JANUARY 01: Oregon Ducks (58) Penei Sewell (OL) looks on before the Rose Bowl game between the Wisconsin Badgers and the Oregon Ducks on January 1, 2020 at the Rose Bowl in Pasadena, CA. (Photo by Brian Rothmuller/Icon Sportswire via Getty Images)

Happy New Year, everyone! It’s now 2021, and football teams will have a blank slate to work with this offseason as they try to fix their shortcomings. In this 4-round 2021 NFL Mock Draft, I try to help right teams’ wrongs and fill major voids.

After this mock, head over to PFN Mock Draft Simulator and run a mock draft of your own. Give it a whirl and see what your vision is for a team and how it contrasts with mine. If you want to send me them or discuss anything in this mock draft, you can find me on Twitter @FarabaughFB.

We know this is going to happen. Even with Clemson’s loss in the Sugar Bowl on Friday, it doesn’t change the fact that Trevor Lawrence’s physical tools are insane. Shahid Khan and the Jaguars are not going to mess this one up for themselves. Lawrence is their future. Run the card up to the podium as fast as you can and take your guy.

Flip a coin on this one. The Jets ruined their chances of getting Lawrence with two straight wins, but they are still in a prime position to get another quarterback. However, now it is far less clear if they hang onto Sam Darnold or not. I tend to think they go with a new quarterback. Darnold is far from cooked in this league, but a quarterback just makes sense. You get that guy on a rookie deal and have the capital to maximize his surrounding cast.

Justin Fields vs. Zach Wilson is an entirely different debate, too. We saw Fields light up Clemson on Friday. That was the game he needed to have, and it will help his stock. Wilson is all the rave in league circles, but Fields put on a show against the Tigers. That is what he needed. He is the second QB off the board in this 4-round 2021 NFL Mock Draft.

The Dolphins have to love the spot they are in right now. They can either trade back for a king’s ransom or take one of the best players in the draft. They get that in Penei Sewell. I know Tua Tagovailoa isn’t gleaming right now, given the odd spot the Dolphins are in with him and Ryan Fitzpatrick, but he has shown legitimate flashes. I just don’t think Miami will look at where they are and think they have to move on from Tagovailoa.

However, their offensive line is not good. Sewell can step in and help protect Tagovailoa. Austin Jackson has not lit the world on fire at left tackle, either. Sewell is far from perfect at this stage, but the demeanor and physical skill set Sewell has shown should make him a quality NFL player.

The Falcons are a tough one to nail down here. Quarterback is obviously tempting, but I have more than enough faith in Matt Ryan. The Falcons have zero pass rushers off the edge. Dante Fowler Jr.’s disappointing season only exacerbates this gaping hole.

Enter Kwity Paye, who is one of the freakiest players in this class. As an edge rusher, Paye anchored a state-winning 4×100 team in high school. This young man will test phenomenally. Undeniably, his elite tools give him high upside. This is one that should make Falcons fans happy in this 4-round 2021 NFL Mock Draft.

I think the gap between Slater and Sewell is smaller than most would like to admit. Slater’s performance against Chase Young last season is going to do wonders for his draft stock. He possesses incredible body control and core strength on top of light, quick feet. Slater may lack the traditional arm length, but his traits and phenomenal hands more than make up for it. The Bengals get a key player to protect Joe Burrow as a result.

The Eagles receiver room seems so barren. Given that Ja’Marr Chase is highly viewed around NFL circles, it would come as no surprise to see him be the first receiver off the board. Chase is outstanding when the ball is up for grabs. He is the definition of a high flier out there. The Eagles need that alpha receiver and Chase can be that guy for them. It makes sense in this 4-round 2021 NFL Mock Draft.

The Lions are a fun offense to watch with Matthew Stafford. Unfortunately, that era is coming to an end soon. There are zero reasons for the Lions to pass him up with Zach Wilson on the board here. Wilson is phenomenal out of structure. He just runs around and makes plays. Wilson has a solid arm and is a good athlete.

His buzz is through the roof at this stage, and if the Lions get into this position, they cannot let him slip through their hands. He has franchise QB potential and the new regime in Detroit will jump all over that.

There is undoubtedly tremendous risk with Trey Lance. He is an FCS quarterback with only one season of full play under his belt. Still, his upside is undeniable. So with an offense like the Panthers have, Lance is a nice fit here. Teddy Bridgewater has not silenced any critics down the stretch, either. If Lance hits with his athleticism and arm strength, the Panthers will have struck gold, even despite the risks with Lance. Betting on his traits makes it worth it.

Farley is the first cornerback off the board because he will blow the roof off Lucas Oil Stadium at the Combine. His hip fluidity at his size is not normal. He is an elite off-man coverage cornerback as a result of that. He is still rough around the edges, but Farley has the quintessential traits to be a great pure cover cornerback. With all of the top 4 QBs gone, the Broncos will jump all over him.

It is no secret the Cowboys need a cornerback. They have Trevon Diggs, but both Chidobe Awuzie and Jourdan Lewis are on expiring deals. With Farley off the board, they will jump all over Jaycee Horn.

A true junkyard dog, Horn will be aggressive and let the receiver hear it after every play. Cornerbacks that play that mental game can get burnt, but Horn has the skills to back it up. He is a ballhawk who will get after it on every rep. Every team can use a guy like Horn, and the Cowboys get themselves some much-needed help and swagger defensively.

This fit makes all the sense in the world. The Giants need help at linebacker and off the edge. Micah Parsons is green and is still learning the position at inside linebacker. He is not even a great coverage linebacker, but the athletic and physical upside is there.

However, Parsons brings notable upside as a pass rusher, too. The Giants can let him go after quarterbacks whenever they see fit. Patrick Graham is a creative and innovative coordinator, and Parsons is a lock and key fit for this defense. It makes too much sense to pass him up in this 4-round 2021 NFL Mock Draft.

The 49ers are in a tough spot here. There is no quarterback worth it at this point, so they have to pass on reaching for anyone else. With Richard Sherman on an expiring contract, getting a physical, press-man cornerback like Patrick Surtain II makes a lot of sense. Disciplined and controlled, Surtain lacks elite deep speed, but the physical traits are as enticing as they could be for a cornerback. He fits in across from Jason Verrett.

The first order of business for the Chargers should be to get Justin Herbert some protection. The man is clearly talented, but he is running for his life out there. So in this 4-round 2021 NFL Mock Draft, they go out and get one of the most physically imposing tackles in the class.

Darrisaw brings nastiness, length, athleticism, and mobility all rolled into one. He truly is a guy that looks the part of a cornerstone offensive tackle. Darrisaw has room to grow in his frame to get even stronger. He is a plug-and-play left tackle for the Chargers right away.

The Vikings have a bevy of defensive needs. It is not just cornerback or safety, but also interior defensive line and edge rusher too. Azeez Ojulari pairing with Danielle Hunter is scary good for the Vikings.

Ojulari exhibits great explosiveness and bend out there. His hands are continuously improving to soften that arc off his rip-dip move. Immediately, Ojulari is an impact run defender who is strong at the point of attack and heavily aware. With more development, Ojulari can become a terrorizing force as a pass rusher, too.

Similar to the Broncos, the Patriots are at a spot where they need a quarterback, but none are worth it here. They can still be rewarded with a polished stud of a receiver, however. Devonta Smith‘s name needs no introduction. He is 6-foot-1 and only 175 pounds, but his tape eases any of those concerns.

Smith is one of the smoothest route runners I have scouted. Add that he plays bigger than his size and weight, and you have a phenomenal receiver prospect. The Patriots cannot pass that up.`

This is a luxury pick. The Cardinals have defensive needs, but this fit makes too much sense. Kyle Pitts is just a massive receiver masquerading as a tight end. With DeAndre Hopkins already in that offense, Pitts makes this offense absurdly hard to slow down. Pitts can be a Darren Waller-esque player. For a Kliff Kingsbury offense, that would be huge. Kyler Murray would have a massive safety blanket. They cannot pass up this value,