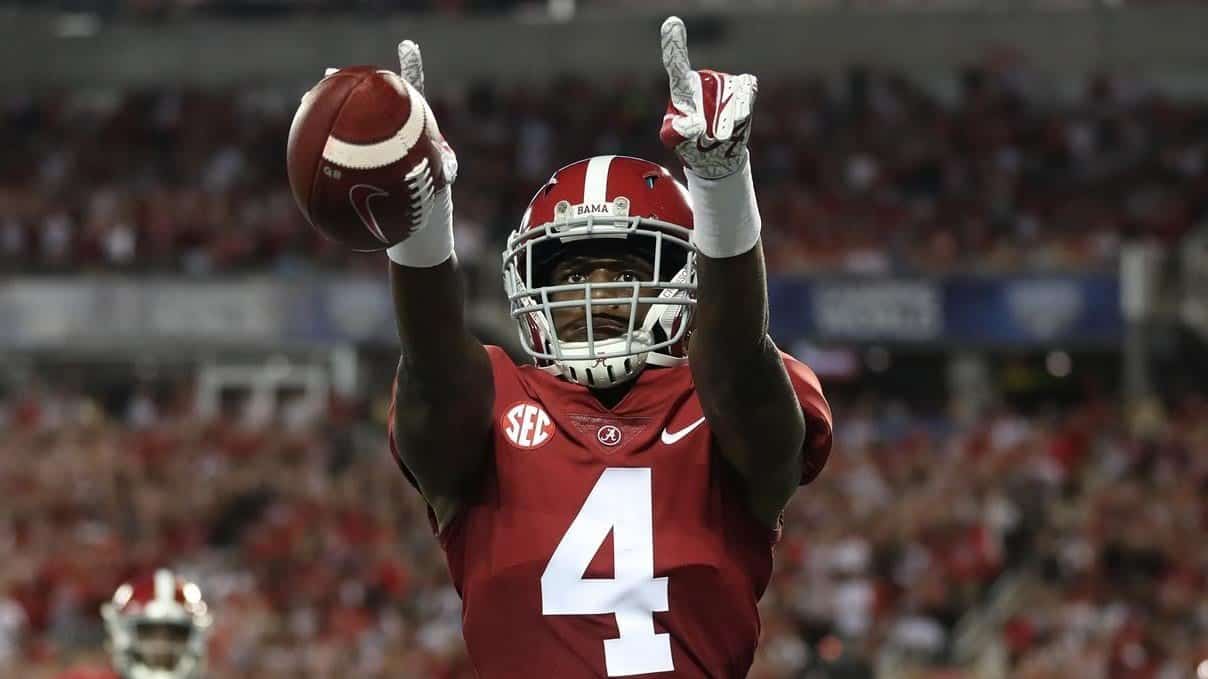 Credit: USA Today
What's in this article? Click to show
A wide range of wideouts
Back from the grave?
Elway electrifies Mile High
Lamb to the flock
Best of the rest
The year of the wideout

Tonight’s first round of the NFL Draft proved this was the year for the 2020 wide receivers. It came as soon as it went, and one thing is sure: the first round of the 2020 NFL Draft did not disappoint. From the second Roger Goodell stepped foot onto his podium and the Zoom screens fizzled across the airwaves, fans knew they were in for a treat.

There were few surprises at the top. Joe Burrow bowed to the Bengals, while Chase Young returned home to D.C. Miami’s tank was triumphant, as Brian Flores will now work with a franchise quarterback in Tua Tagovailoa. Lastly, who would have thought that Las Vegas would take Damon Arnette or Seattle would overdraft Jordyn Brooks?

However, one thing that was not a surprise, was the domination of first-round wide receivers. With some of the best in recent years, the hype was alive and well. Heralded for their hands and stood out for their speed, more than one was set to shine.

The draft wasn’t filled with the glitz and glamour that is the usual signs of a successful first night, but it proved that one thing rings true: The 2020 wide receivers class was in full display, and this was the year of the next great wide receiver.

A wide range of wideouts

A quarterback won’t be defined by the weapons that surround him but having quality ones does help. Heading into Mobile, scouts were already juking and jiving about the plethora of talent that would enter the league. From late-round gems to first-round phenoms, there wasn’t a shortage of 2020 wide receivers to select.

“We (every receiver at Alabama) are very versatile,” Alabama’s Henry Ruggs III said last February at the NFL Combine. “We learn the whole playbook so we can help each other and move around if we have to. I want to show I am a complete receiver and not a one-dimensional (speed) guy.”

Get to know Henry Ruggs, #Raiders fans, with this in-depth feature by @ChaseGoodbread on the star Alabama wide receiver.https://t.co/9Ts0OgqQQT pic.twitter.com/KpqCoxQ9tO

There will always be talent at the top, and the 2020 wide receivers class was no exception. The schools of Crimson started the season embarking on a quest to raise the National Championship trophy come January. And if not for the first overall pick and a freak injury to their quarterback, perhaps Oklahoma and Alabama would have met once more in postseason play.

Oklahoma’s CeeDee Lamb and Alabama’s Jerry Jeudy, as well as Ruggs, all bring a unique style of play to the table. Lamb, perhaps the most sound target to ever enter Norman, has already adjusted to the NFL quarterbacks after hauling in touchdowns from back-to-back No. 1 picks.

Ruggs and Jeudy were cut from the same cloth as a perfect 1-2 combination down in Tuscaloosa. Jeudy, the leader of what could only be called the “Four Horsemen of the Bamacalypse” excelled thanks to pure route-running and the ability to freeze defenders in their tracks. Ruggs, the ideal vertical threat, became known for his ability to take the top off the defense while using his legs to pile first downs.

In their final year, with the new face of South Beach, the two combined for 117 catches and tallied over 1,900 yards with 17 trips to the end zone.

Perhaps the wait was a tad too long, but boy, will their new fan bases enjoy watching the start of their careers.

Back from the grave?

One thing to know about Al Davis is his love for speed. Ask anyone who ever worked in the Raiders’ front office, and that will be the first thing they say. Who could forget the infamous Darrius Heyward-Bey selection in 2007?

Perhaps his son Mark learned from his father’s mistake by adding a new speedy target to start the modern era in Sin City by making Ruggs the first receiver taken. Even with two polished products waiting in the wings, that 4.27 speed will wreak havoc for a race to fifth place out west.

Ruggs should compliment Tyrell Williams beautifully as the other option outside. Quality hands will play into his favor, as the former Tide talent only recorded one drop in 2019. Throw in his average of 18.7 yards per catch, and you have a top-caliber target in the making.

The Raiders will need that if they hope to add another element to rookie sensation Josh Jacobs’ ground-and-pound game. The team’s wideouts ranked 30th overall in receptions (145) and 29th in yards receiving (1,858), while rookie slot receiver Hunter Renfrow led the team with 49 catches.

John Elway made it clear his team needed another option for young Drew Lock. Most mocks had Ruggs falling to Mile High, but they’ll settle with perhaps the most NFL-ready receiver.

Jeudy was known for his ability to make defenders miss at first glance and good luck to whoever was forced to hear from his defensive coordinator later. Perfect in his route running, and a tree blooming with ways to win all-around, the Florida native shined bright on his way to a Biletnikoff Award and consensus All-American vote, twice.

Thrilled to be able to select Jerry Jeudy with the 15th overall pick.

He’s an explosive player who was the top WR on our board. Jerry’s an excellent route runner who knows how to get open, and he’s from a winning program at Alabama.

Excited to add Jerry to the Broncos! pic.twitter.com/hMGlVyCs2A

“I expected to go a little higher, but at the same time, the draft every year is crazy, and you never know what will happen,” Jeudy said during a conference call, via Denver Post’s Ryan O’Halloran.

The stage will be set for the Broncos’ offense to become dynamic. Still quick off the line, Jeudy will become the downfield threat to give Lock a chance to extend his arm and score the long ball. With Courtland Sutton and Noah Fant vastly growing as standouts at their respective positions, Denver’s limits should be higher than their elevation.

Lamb to the flock

Give Jerry Jones credit. The man knows how to sell out a stadium.

Falling deeper down the draft boards, Lamb finally saw his stock standstill when the Dallas Cowboys added him to their arsenal. Was it needed? No. Is Dak Prescott going to be happy? You be the judge of that.

Mike McCarthy will now have the steadiest hands catching passes on his sideline. The 6-foot-2 wideout has big-play threat potential and can ruin a cornerback’s evening with one quick move. After posting 31 missed tackles in the Big 12, let’s see how his skills slide inside the star.

The https://t.co/fiDTYirx1d staff is beginning their '17 for 17' series with #NFLDraft prospect, CeeDee Lamb. Take a closer look at how the WR has made a case for himself to be the team’s 17th pick. pic.twitter.com/b4iBpjW0yh

The Cowboys will undoubtedly have one of the most terrifying offenses in the league come kickoff. Dallas inked Amari Cooper to a five-year, $100 million deal this offseason, while second-year standout Michael Gallup tallied over 1,100 yards and six touchdowns. Throw in the three consecutive seasons of 800-plus yards from Lamb, and the NFC East could become a showdown starting in the Lone Star State.

A phone call to Atlanta would have put Howie Roseman in place to take Lamb. Instead, they dipped their hand in the Big 12 pot and found another option for Carson Wentz.

TCU’s Jalen Reagor won’t be considered a “top” pick in this 2020 wide receivers class, but the City of Brotherly Love still grabbed a quality weapon. The 5-foot-11 Horned Frog tallied 1,231 scrimmage yards and 11 touchdowns in 2018 but saw his production dip in his final season nearly half a season later. Playing in quarterback purgatory won’t help, but an established quarterback in Wentz could have him flourish in no time.

The moment @jalenreagor became an Eagle.

Tune in to the #NFLDraft from April 23-25th on ABC, ESPN, and NFL Network.#EaglesDraft | #FlyEaglesFly pic.twitter.com/BehjT7xoZn

Could the same be said for Justin Jefferson? The Bayou Bengal will have shoes to fill in the Land of 10,000 Lakes when he suits up for the Vikings. A member of one of the greatest offenses to ever take the field, the junior lead the FBS with 111 catches and 18 touchdowns.

Best used in the slot, he could have trouble transitioning into the role filled by Stefon Diggs. If he hits early, Kirk Cousins and Minnesota will have another piece to run the NFC North.

John Lynch needed to add another weapon to replace Emmanuel Sanders. He didn’t go far to address the problem out in the Bay, roughly 700 miles. Brandon Aiyuk is as good as any when it comes to picking up yards and making plays with his hands.

While he won’t “wow” you with his ability to go deep like Sanders, the Arizona State product could be the spark that ignites a fire into the defending NFC Champions. After all, no one calls you “YAK” if you can’t live up to the hype.

The year of the wideout

Plenty of names remain for the race to WR1. Colorado’s Laviska Shenault has the physical presence, while Baylor’s Denzel Mims will speed his way downfield. Penn State’s K.J. Hamler won’t capture your attention with his size, but his heart will. “Wide Receiver U” could add their next great as Tee Higgins remains ready for action.

That is all for another night.

Thursday did not disappoint, as 32 rookies have joined the fraternity that is the National Football League. Still, while the Bengals will bank on Burrow, or Washington hopes their Young pass-rusher stuns, half a dozen teams will be walking away with their next potential elite target.

Six receivers heard their name called as the clock dwindled past midnight. Come September, they’ll be heard over an intercom in an end zone near you.