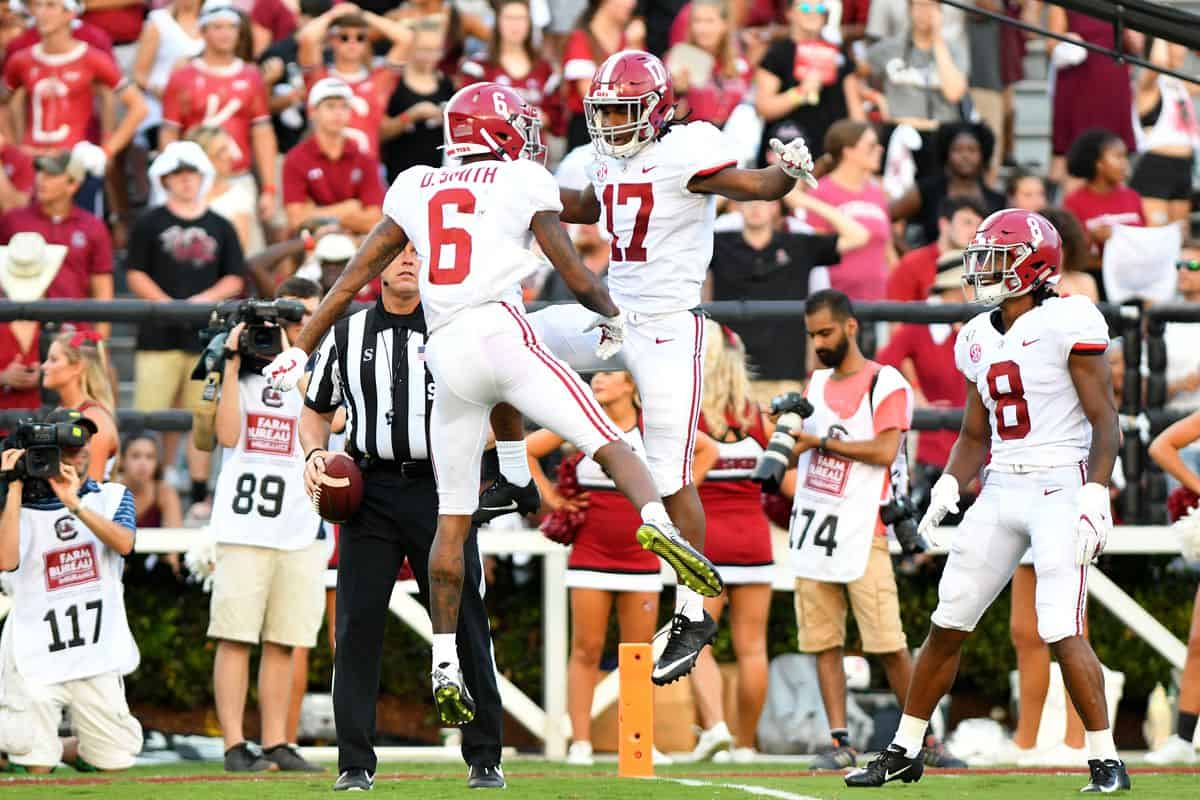 Last week, my 2020 Preseason Summer Scouting series took a look at the ACC. This week, my early look at the prospects that may be available in the 2021 NFL Draft moves forward over the next two weeks with a third “Power Five” conference – the Southeastern Conference (SEC), where I give a total of six prospects first-round grades entering the 2020 college football season.

The final installment has been released, meaning all of the ACC teams are now available.  To view my grades and projected draft rounds for SEC draft-eligible prospects, scroll to the end of the article.

Dylan Moses did not take a snap last season after hurting his knee in camp. But had he played and played to the level he’s capable of, Moses would’ve been a top-12 pick. He’s a complete linebacker with a three-down game who is strong enough to stack against the run and athletic enough to drop into coverage and make plays against the pass.

If healthy and back to prior playing form, Moses could be a very early selection in 2021.

DeVonta Smith is a sturdier version of Jerry Jeudy and a better receiver than Henry Ruggs III. He’s a surehanded, consistent wideout with the ability to break plays wide open. In the end, I think Smith ends up going in the middle of the first round like Jeudy this past April.

I am much higher on Alex Leatherwood than most others, including scouts. I love his footwork, blocking range and ability in pass protection. He’s a natural left tackle with starting ability on Sundays.

Patrick Surtain II is a big, physical corner who has a great combination of athleticism and muscle. He physically beats down opponents to defend the pass, but I’m concerned with the way he constantly faceguards opponents and rarely gets his head back around to locate the ball.

As far as I’m concerned, running back Najee Harris is a first-round talent playing a Day 2 position. He’s a three-down back who can do it all — grind it out on the inside, get around the corner and catch the ball out of the backfield. His vision, short-area quickness and instincts are incredible.

Related | 2021 NFL Draft: Najee Harris is most well rounded back in class

Alabama has a bunch of true sophomores who look as though they will be top prospects in the near future, including linebackers Shane Lee and Christian Harris, defensive linemen Justin Eboigbe and DJ Dale, and safety Jordan Battle.

Reminder: To view my grades and projected draft rounds for SEC draft-eligible prospects, scroll to the end of the article.

Despite a win-loss record that has been rather poor the past half-dozen years, Arkansas has had their fair share of early-round picks during that time. This year, yet another offensive lineman sits on top of the Razorbacks’ board.

Myron Cunningham is tall and fluid and stands out in pass protection. He displays good footwork off the edge and the ability to slide in space. While he must improve his playing strength, Cunningham comes with a lot of growth potential.

Rakeem Boyd is graded as draftable by a lot of scouts, but I see no distinctive characteristic in his game. He’s not a big interior runner, plays with only adequate speed and runs too tall for my liking.

2020 was a banner draft for Auburn and was on a par with the results from 2014, another year in which the program had multiple first-round picks. Next April pales in comparison and will be reliant on underclassmen.

Seth Williams is already highly considered in the scouting community, and the film explains why. He’s a tall, lanky receiver with exceptional hands who displayed improvement throughout 2019. More of a possession wideout, Williams has the skills to line up as a No. 3 on Sundays.

Safety Jamien Sherwood also has nice size for his position, but he comes with better speed. He flashes on the scene, has a forceful style and displays great range. Sherwood has big upside as well, but he’s not as NFL-ready as his receiver teammate.

Reminder: To view my grades and projected draft rounds for SEC draft-eligible prospects, scroll to the end of the article.

Since 2013, Florida has had a player selected in the top 35 selections of every draft. On several occasions, they have had multiple first-round picks. I expect both those streaks to end next April.

Tight end Kyle Pitts is the one player who can keep the streak going if he pulls it all together. Pitts is a terrific athlete with the speed to beat defenders down the seam. He’s mobile and makes some tough receptions. Pitts lacks football consistency and I think he’s a better athlete than football player at present time, but he has tremendous upside.

Jean Delance is a mobile right tackle who blocks with tremendous fundamentals and shows nice athleticism. He needs to get stronger and could push into guard at the next level, but he has an NFL future.

Trevon Grimes is a big-bodied receiver with a consistent game. He’s faster than most “possession” wideouts and could make a move up draft boards if his production takes off this season.

Several scouts that I’ve spoken with love Shawn Davis and grade him as a top-75 pick, but I disagree. Davis is solid but comes with average size, speed, and ball skills.

I like Kyle Trask, but he’s more of a game manager at the next level — he’s smart, protects the football and stays away from errant passes.