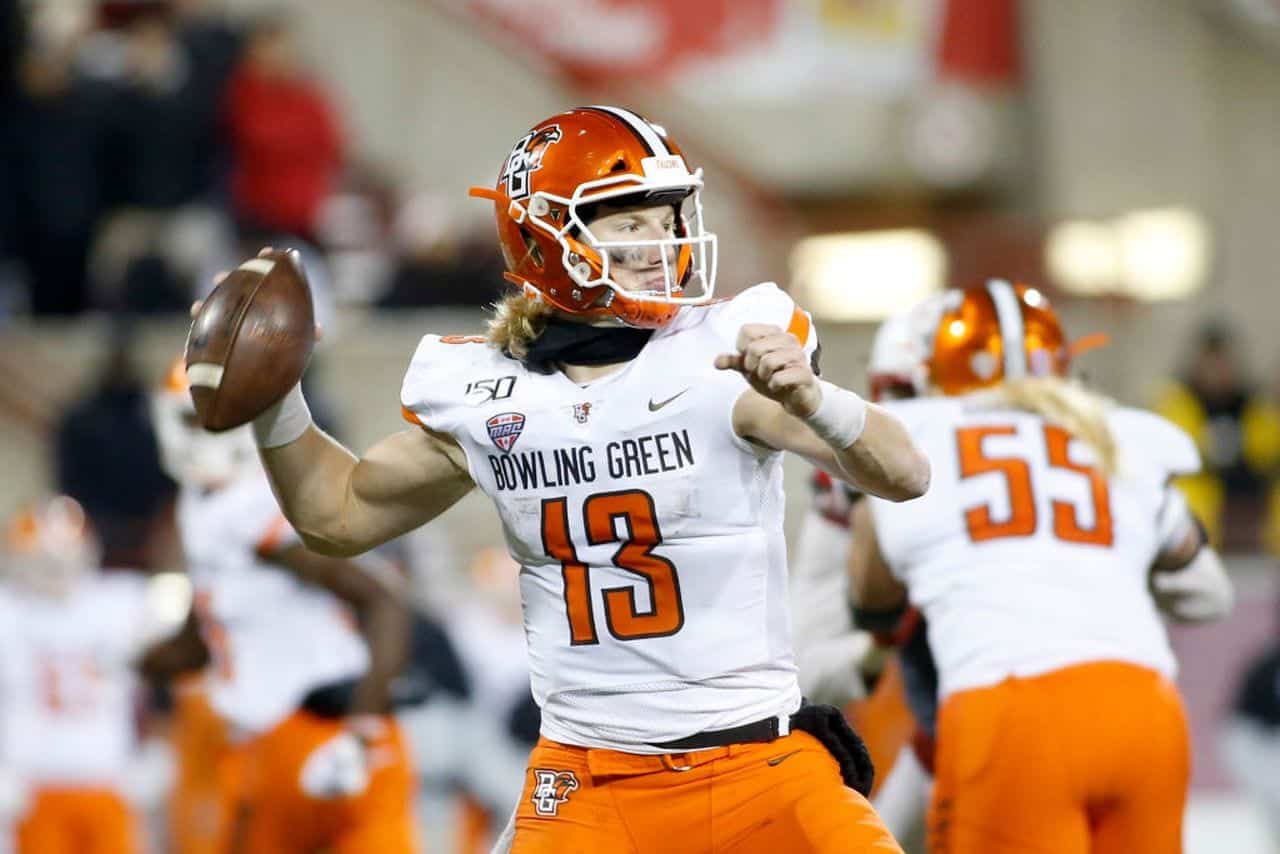 With the 2020 NFL Draft firmly in the rearview mirror, it’s time to turn our attention to the next set of NFL prospects that could be available next April in the 2021 NFL Draft in Cleveland. That said, it’s time to begin my annual Preseason Summer Scouting series, kicking off with a look at the Mid-American Conference (MAC).

The first half of the MAC teams were published last week. The remaining teams have now been added as well. To view my grades and projected draft rounds for MAC draft-eligible prospects, scroll to the end of the article.

In the past dozen years, Akron has had just two players selected in the draft. That number won’t change next April.

Linebacker Michael Scott is a quick run-and-chase linebacker who shows good speed in every direction. Though lowly graded on my board at the present time, he is the type of defender who could move up draft boards if he takes his game to another level over the next two seasons.

I gave quarterback Kato Nelson an undrafted free agent grade last summer, and although he’s a good athlete with a next-level arm, he really didn’t show much progress as a passer in 2019. Nelson has upside as an RPO quarterback, but he must develop into more of a passer than a thrower.

Ball State had one single player selected during the draft’s final day in April, offensive lineman Danny Pinter. Two Cardinals presently grade as Day 3 picks on my board, both from the defensive side of the ball.

I gave Christian Albright a late-round grade last summer, and the linebacker showed improvement in his game last season. He’s a fluid pursuit linebacker with next-level instincts. Albright is also a tough defender who sells out on the blitz, but his size and speed are of concern to me and will dictate where he’s ultimately selected in the draft.

Amechi Uzodinma II is a terrific corner who could go much earlier than the seventh round, where I presently have him graded. He comes with terrific ball skills and possesses a good head in coverage. It’s obvious watching the tape that opponents purposely stay away from Uzodinma because of his ability to shut down receivers. If he continues to develop his game, a top-125 grade is possible.

Safety Bryce Crosby is tough, smart and productive. Like Albright, size and speed will determine where the senior is drafted.

Bowling Green has had a smattering of players selected in the draft recently, despite being a program that always seems to be on life support. They have two prospects I really like this year, although one is stuck in the transfer portal.

Quarterback Grant Loy is the aforementioned player in the transfer portal, and I’ve yet to see where he’ll end up in 2020. He’s a nice-sized passer with an NFL arm, a next-level head and terrific quarterback intangibles. Loy uses all his targets and accurately places throws. He has the tools necessary to make a James Morgan-like jump up draft boards, assuming he finds a place to play this season.

Tight end Quintin Morris was one of Loy’s big-play threats, and he’s a terrific pass catcher at the position. Morris shows the ability to get downfield, and in many ways, he looks like a possession receiver in a tight end’s body.

Despite having one of the best players in the NFL come from the UB program, it’s been a bit of a dry spell for the Bulls recently – one I don’t believe will change anytime soon.

Safety Tyrone Hill is a solid downhill safety who displays a lot of skill between the numbers. He’s efficient stopping the run and covering the pass, but I don’t see huge upside in his game.

Jaret Patterson is a feisty, hard-charging running back with size limitations. He’s solid in all areas of the position, which could help him catch on as a fourth running back.

Malcolm Koonce is a solid pass rusher with decent size who flashes big-play ability. If Koonce pulls it together, I could see a Shrine Game invitation and potential late-round calling of his name in the future.

Despite not having a player selected in last year’s draft, CMU had a good run during the second decade of the new millennium. Unfortunately, it looks as though 2021 will be another dry year.

Defensive end LaQuan Johnson comes off a career season as a freshman and was a consistent nuisance for opposing quarterbacks.  He’s explosive and shows natural pass-rushing skills but needs to fill out physically and continue to improve his game.

Devonni Reed was my highest-rated CMU prospect last summer, but I really didn’t see much improvement in his game last season. Reed is a nice-sized safety who flashes ability, but he must really step up his game.

Based on his dimensions, tight end Tony Poljan looks like a power forward on the football field. He’s a long athlete and offers his quarterback an imposing target. Despite his imposing physical dimensions, Poljan looks more like a size prospect at this time rather than a real good football player.

Pass rusher Maxx Crosby continues to do Eastern Michigan justice in the NFL. This year, it’s a prospect on the offensive line who has an opportunity to do the same.

Last summer, I graded left tackle Sidy Sow as a late-round prospect off the 2018 film. Sow moved to guard during the 2019 campaign, and he showed flashes but little in the way of improvement.

Sow has the size and power, and he flashes enough movement skills to line up as a zone blocker. If he takes his game to the next level and improves the details of his position, such as his blocking balance, Sow will be a solid last-day prospect.

Miami had one of the two players drafted from the MAC in April, kicker Sam Sloman. The program could have another late-round selection in 2021.

Cornerback Manny Rugamba is a solid cover man who plays feisty football. Better facing the action, he’s a tough defender who could line up in zone and play special teams.

Tommy Doyle is a large right tackle who is more of a size prospect at this point. Doyle controls opponents once he gets his hands on them, but he’s a small-area prospect with limited athleticism.

NIU has a decent history of placing players into the NFL Draft the past 10 years, including first-round choice Jimmie Ward in 2014. But the program has hit a rough patch in recent years and that will result in just a few draft selections coming out of Northern Illinois in the near future.

No player from NIU currently has a draftable grade on my board. If there is one who could make a leap into the late rounds, it would be linebacker Kyle Pugh, and that’s assuming he returns to form after missing all but two games last season due to injury. Pugh is a smallish, run-and-chase linebacker who stands out in pursuit.

Defensive lineman Jackson Heflin has the size, intensity and power to line up at nose tackle in the NFL. He displays solid playmaking skills for a bigger (315-pound) interior lineman.

Ohio is a solid college program that rarely produces any NFL talent of note, and that won’t change any time soon.

Receiver Cameron Odom has flashed ability, but he has been very inconsistent the past three seasons. Despite possessing next-level size and speed, he hasn’t taken his game to the next level.

Odom is not even on the radar in the scouting community right now, but that could change with a breakout season.

From Diontae Johnson to Kareem Hunt to John Greco, most of the Toledo players who made their mark in the draft have come from the offensive side of the football. That will change in the near future.

Nate Givhan was a terror on the field in 2019 and a disruptive force upfront. He is a solid pass rusher who makes a lot of plays behind the line of scrimmage. While I’m concerned about his measurables, Givhan has a next-level future.

Devan Rogers is also another very good football player with questionable size for the next level. He is a penetrating tackle who also makes plays down the line and out in space. Rogers projects as a three-technique tackle.

There are also some in the scouting community who really like Sam Womack, a feisty cornerback who goes about 5-foot-9.

It has been a dry spell for Western Michigan the past two drafts, but expect that to change in 2021.

Few in the scouting community think as highly of Jaylon Moore as I do, with some outright dismissing him. I think the senior left tackle will be the next top blocker to come from the program.

Moore has a thick build and plays with proper fundamentals and strength. While he lines up at left tackle for WMU, I believe a move to the right side or even guard is in the offing.

Andre Carter is an undersized college defensive end who displays terrific pass-rushing ability. He’s fast off the edge and fluid moving in every direction, and he makes plays in space.

Ralph Holley is a disruptive force, but he comes with poor measurables. I envision him as a three-technique tackle or perhaps a backup middle linebacker in the right system.

You can sort my prospect rankings below by team, position, projected draft round, and conference. You can also utilize the search function to quickly find whatever you may be looking for. Mobile users: Please note that the database is best viewed in landscape mode.