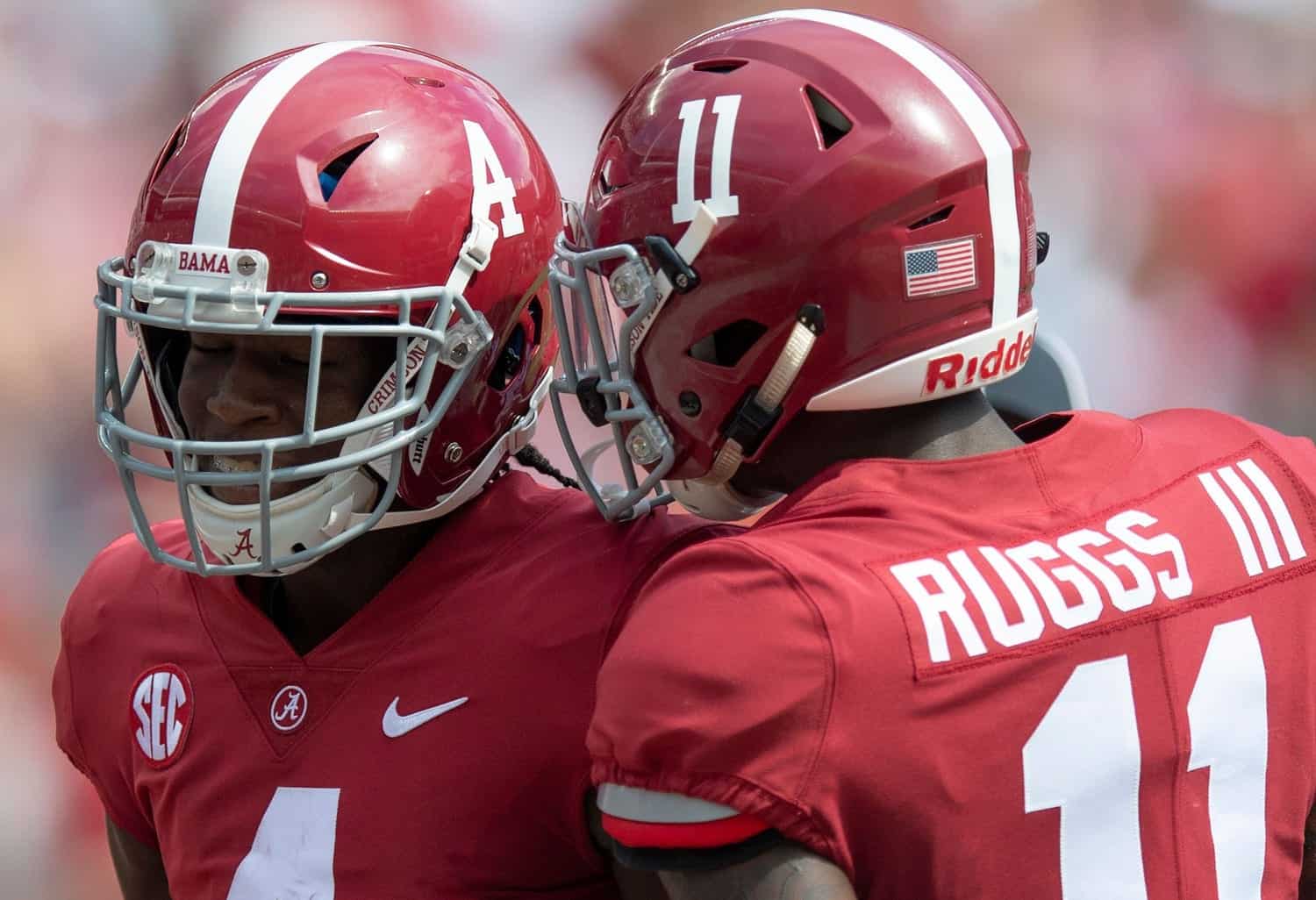 Don’t look now, but we are fast approaching the two-month countdown to the 2020 NFL Draft. The season of mock drafts is upon us, and while from a betting perspective, there still aren’t all that many draft props currently being widely offered, I did stumble across one that intrigued me. The 2020 wide receiver class is shaping up to potentially be one of the deepest in recent memory.

MyBookie.ag is currently offering odds on the first WR taken (prop is only available through this week, so act accordingly), and while the NFL Scouting Combine is still a week away, I believe there is value on the board in this spot. The prop offers four top wide receiver prospects to choose in a draft that some think might see as many as six wideouts taken in round one.

Let’s begin with the longshot of the group, Colorado Buffaloes WR Laviska Shenault. Shenault is an athletic freak who missed portions of all three years in college due to various injuries. Among the nagging injuries that have hampered Shenault is a groin and pubic bone inflammation that we just learned this past week won’t require surgery.

He is an explosive, physical player who is perhaps most dangerous after the catch at this point. Shenault is expected to work out at the Combine and look to improve his current draft stock. The MyBookie odds have Laviska Shenault at +1000 to be the first wide receiver off the board, but I’m not even sure those odds are long enough.

You would be hard-pressed to find a mock draft with Shenault sneaking into the top-20 of the NFL Draft. Most places have the Colorado receiver landing with a team like the Philadelphia Eagles, Buffalo Bills, or New Orleans Saints in the bottom third of the first round.

It’s difficult to convince yourself Shenault could be the first wide receiver chosen when some mocks have a guy like Jalen Reagor out of TCU going before him at the tail end of round one. Any team drafting Shenault is hoping he can become their version of Deebo Samuel, but just don’t expect him to get chosen before any of the other three studs on this list come April 23rd in Las Vegas.

From the longest odds to the shortest odds. Alabama wide receiver Jerry Jeudy broke out for 204 receiving yards on six catches in his final game for the Crimson Tide against Michigan in the Citrus Bowl. Jeudy won the Fred Biletnikoff award as a sophomore in Tuscaloosa and posted consecutive 1,100-yard campaigns during his time with Tua Tagovailoa.

Jeudy is the most polished route runner of the bunch and projects as an elite wide receiver at the NFL level. From the moment Jeudy announced he would forgo his senior season, he’s been popping up in the top ten of mock drafts everywhere.

Jeudy would love nothing more than to join Amari Cooper and Julio Jones as fellow Alabama wideouts taken in the top ten. While that may very well happen, paying the -250 price offered here as the betting favorite is way too much juice for my liking.

The Arizona Cardinals and Carolina Panthers appear to be the only top ten teams who would even contemplate taking a WR at this point. However, a trade-up is never out of the realm of possibility. While Jeudy seems to be a can’t miss prospect, even drawing some Odell Beckham Jr. comparisons, I can’t lay -250 on someone who might not even be the first Alabama wide receiver off the board.

Believe or not, there are some draft pundits out there who think Jeudy’s Alabama teammate Henry Ruggs III gets chosen before him on draft night. Ruggs has rare, game-changing speed. He has the type of speed that has NFL folks buzzing about a potential record-breaking 40 yard dash time at next week’s combine in Indianapolis.

Ruggs isn’t just a world-class sprinter lined up running endless go-routes, however. This is a five-star recruit who has shown the ability to go up and catch contested balls during his time with the Crimson Tide.

While I still suspect Ruggs is more likely to fall into the middle of the first round, going to a team like the Indianapolis Colts or Denver Broncos, all you need is one owner or general manager to fall in love with that speed for Ruggs to jump ahead of the rest of the pack here.

Related: What wide receivers might the Denver Broncos target in the 2020 NFL Draft?

From a pure gambling perspective, Ruggs has far more value at +500 than his Alabama counterpart. A guy like Brandin Cooks provides a solid floor for Ruggs’ potential, although if a franchise thinks they might be looking at Tyreek Hill minus the off the field concerns, who is to say Ruggs III isn’t the first wide receiver selected?

If you’re looking for a bit of a lottery pick in this spot or want a little more bang for your buck, then, by all means, throw down some ice cream money on Ruggs III at +500 to be the top wideout in the 2020 NFL Draft. Wouldn’t it be fitting for the Las Vegas Raiders to trade up and grab Ruggs in a move that would make Al Davis proud?

The final wide receiver showcased in this MyBookie draft prop is Oklahoma Sooners standout CeeDee Lamb. You will see Lamb frequently projected at the number eight overall pick to Arizona as a potential replacement for Larry Fitzgerald. This pairing makes entirely too much sense as it provides an elite playmaker for Kyler Murray and one he’s obviously already comfortable with from their time spent together in Norman.

CeeDee Lamb put up silly numbers during the 2019 season, amassing over 1,300 yards and 14 touchdowns. The complaint with Lamb is that he produced those numbers against the weaker defenses of the Big 12 conference. Although Lamb defenders will point out that he can do all of the same things that Jeudy can do in terms of route running and playmaking, only at a bigger size and with a more proven ability to catch the ball in traffic.

If Lamb projects as having a DeAndre Hopkins type ceiling, it’ll be difficult to see him fall out of the top 10-12 picks come April. I truly think Lamb vs. Jeudy is a can’t lose coin flip for NFL franchises. From the pure gambling perspective, grabbing Lamb at +200 to be the first wide receiver drafted is too much value to pass up on here.