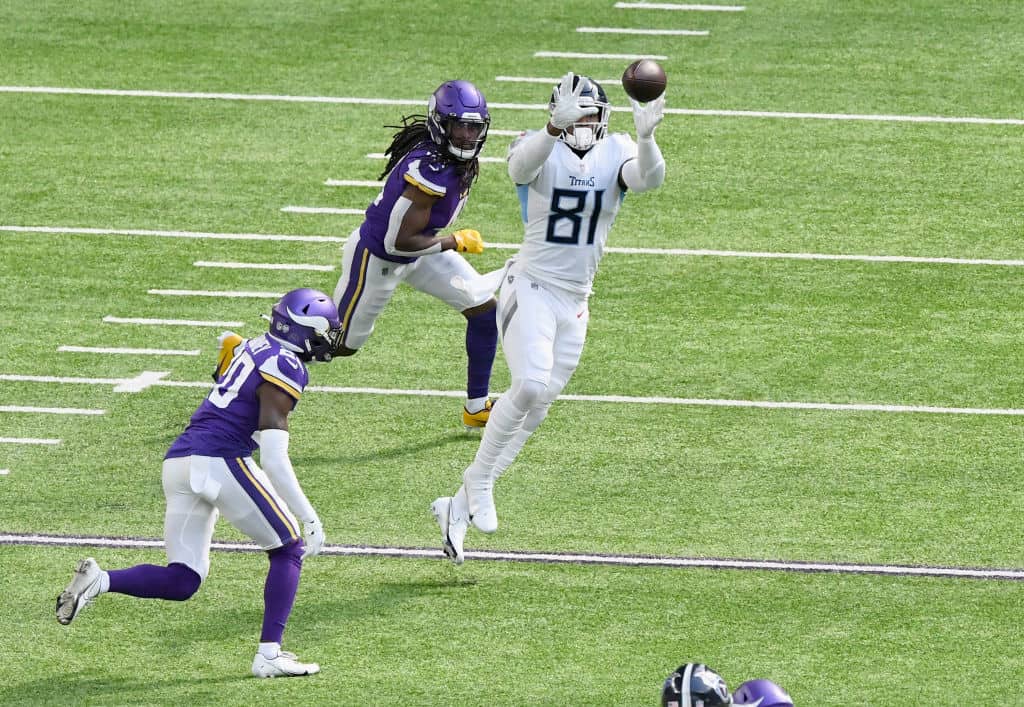 MINNEAPOLIS, MINNESOTA - SEPTEMBER 27: Jonnu Smith #81 of the Tennessee Titans makes a reception against Jeff Gladney #20 and Anthony Harris #41 of the Minnesota Vikings during the first quarter of the game at U.S. Bank Stadium on September 27, 2020 in Minneapolis, Minnesota. (Photo by Hannah Foslien/Getty Images)
What's in this article? Click to show
Jonnu Smith (ankle) was forced out of his Week 6 matchup early
If Jonnu Smith misses Week 7, are there any replacement fantasy options available on waivers?
Want more fantasy football analysis and news?

Currently one of the hottest tight ends in the NFL, Jonnu Smith’s fantasy status appears up in the air after spraining his ankle during the Titans Week 6 game on Sunday. Having already had their bye week, Smith is the TE5 in fantasy football and has been one of the best breakouts on the season. How should fantasy managers approach Jonnu Smith’s uncertain status for Week 7, and are there any viable replacements if he does miss their next game?

Sunday was a frustrating day on many levels for Jonnu Smith and his fantasy managers who rolled him out as their starter.

Even before Smith was hurt, it seemed Ryan Tannehill only had eyes for TE Anthony Firkser. When both were on the field, Firkser out-targeted Smith five to two, including two in the redzone, which led to his early touchdown. He led the team with nine targets, eight catches, and 113 yards while finding the end zone once.

It was in the second quarter where Jonnu Smith was injured. Smith limped off the field and slammed down his helmet, rarely a good sign. He spent some time getting re-taped and trying to get warmed back up, but he was never spotted again after being announced as questionable to return.

Smith battled an ankle issue earlier this season but did not miss any time. Between this ankle injury and the return of A.J. Brown, Smith could slide down the fantasy rankings quickly if he does not see the volume we have grown accustomed to at this point.

It’ll be essential to monitor Tennessee’s practice reports throughout the week. Jonnu Smith likely needs to get in at least one limited session to have any chance of playing in Week 7. He is currently questionable, according to ESPN’s Adam Schefter.

Losing Smith for any amount of time would be a big deal for the Titans and fantasy managers alike. Smith entered the week with five scores in four games and has quickly put himself into the conversation with the best in the NFL at his position.

If Jonnu Smith misses Week 7, are there any replacement fantasy options available on waivers?

I’ll start this off with who I think should be the top waiver-wire claim this week: Philadelphia Eagles TE Dallas Goedert, especially because Miles Sanders will miss Thursday’s game, and Zach Ertz will be out multiple weeks with an ankle injury.

Goedert is now eligible to return from injured reserve after missing three games due to a broken thumb, and the value of his return cannot be understated. He was exceptional this season before being injured and should provide a much-needed boost to the Eagles’ passing game.

Goedert is out there in 76.2% of leagues. That needs to be changed as he is a TE1 when on the field, even when Ertz is healthy. He’s a no brainer for any fantasy team looking for a tight end, even if they don’t have Jonnu Smith.

The other logical option is to stay in-house and grab the next man up in Titans TE Anthony Firkser. Coming off a huge day and on one of the hottest offenses in the NFL, Firkser could make some noise again, although they are going against one of the best teams against the tight end position – the Pittsburgh Steelers.

Another player I would target is Minnesota Vikings TE Irv Smith Jr. He caught four of five targets for 55 yards in Sunday’s game and could have had an even better day as he almost had a touchdown early in the game when he reached down for a reception at the goal line, but couldn’t hold on to it. That is back to back games where Smith Jr. has seen five targets and went over 55 yards receiving.

It was also the second consecutive week where Smith was second on the team in receiving yards. The issue with Smith Jr. is that he won’t help your fantasy team this week as the Vikings are on a bye in Week 7.

However, he needs to be on your radar. You could look to add him a week early to beat the crowd as he is rostered in only 2.8% of fantasy leagues and could be a substantial addition for any fantasy GM who is worried about Jonnu Smith missing Week 7.