Why Tua Tagovailoa will start for the Dolphins in 2020

Tua Tagovailoa might not start for Miami right away next season. But sooner or later, a mistake by Ryan Fitzpatrick will give Tua his opportunity.

By Lucas Ellinas
May 26, 2020
What's in this article? Click to show
Fitzpatrick significantly outperformed expectations in 2019
Despite his overall success, Fitzpatrick was just as inconsistent as always in 2019
Why Fitzpatrick’s inconsistency will lead to Tua starting
Barring some dramatic outlier situation occurring, Tua will start eventually in 2020

Since the 2020 NFL Draft, fans and pundits have started to suggest that after being selected fifth overall, quarterback Tua Tagovailoa will not start a single game during this upcoming season. However, after examining the evidence, that seems to become quite unlikely. Of course, it isn’t hard to see why the opposite opinion has become so prevalent.

In his final season at Alabama, Tua suffered a catastrophic injury. Now, fans are understandably cautious regarding his health. On top of that, last season’s starter Ryan Fitzpatrick ended 2019 with a bang, leading the team to a victory over the New England Patriots in Foxborough, something that Miami hasn’t done since 2008.

As an added bonus, that defeat kept the Patriots from getting a first-round bye in the playoffs, which proved fatal as New England lost to the Tennessee Titans in the Wild Card round. It was a triumphant finale to a miserable season, one that turned a naturally likable player into something of a local hero.

Fitzpatrick’s overall statistics were undeniably impressive last season, especially for a player famous for his inconsistent play. In approximately 13.5 games, he threw for 3,529 yards, 20 touchdowns, and 13 interceptions. Not a historically spectacular season, but given how bad the Dolphins were in 2019, it was a more than admirable effort.

He didn’t accrue those statistics by relying on his teammates either. Admittedly, most people probably could have guessed that simply by glancing at Miami’s roster. However, his PFN Offensive Share Metric (OSM), which measures how much impact a player had on their statistical production, demonstrates this fact as well. At 27.75, Fitzpatrick’s grade ranked seventh among qualifying quarterbacks, above players like Aaron Rodgers and Patrick Mahomes. In other words, of all the quarterbacks in the NFL in 2019, Fitzpatrick was one of the most valuable to his offense.

His OSM success was primarily the result of his incredibly aggressive play-style. He threw the ball an average of nine yards past the line of scrimmage across all his pass attempts, and 7.1 yards past the line of scrimmage on his completions, both well above the league average. Those passes weren’t thrown to wide-open receivers either, with 20.9% of his passes being thrown into tight windows, the fourth-highest percentage in the NFL. And despite the difficulty of his passes, Fitzpatrick completed a remarkably efficient 62% of his attempts.

Related | Breida, Howard, Laird: Who is the favorite in Miami’s backfield?

Despite his overall success, Fitzpatrick was just as inconsistent as always in 2019

I can’t deny that, overall, Fitzpatrick played well last season. However, looking only at his season-long statistics hides how inconsistent he really was. Below, you can see a chart that shows his OSM grades from week-to-week. 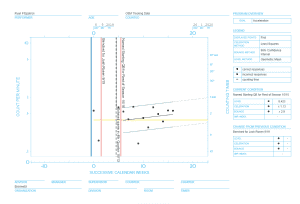 The yellow line represents the league average, and Fitzpatrick surpassed that mark more often than not. He also trended upwards as the season progressed, which is always a good sign. However, there were also multiple weeks in which he put forth some truly disastrous performances.

The first of these came in Week 2 against the Patriots. The game was a 43-0 blowout, one in which Fitzpatrick threw for a paltry 89 yards and three interceptions. His OSM grade of 9.45 was well below his season average and ranked among the worst in the NFL that week.

The reason for his decrease in grade becomes clear when you look at his advanced metrics. He did throw a higher percentage of his passes into tight windows than average, at 33.5%. However, his success rate was significantly lower, only completed 52.4% of his passes, a number that, according to the NFL’s advanced metrics, was 12.9% lower than expected.

Unsurprisingly, Fitzpatrick’s poor performance resulted in his being benched late in the game, and he was replaced by backup Josh Rosen for several weeks. Rosen didn’t reward the coaching staff’s confidence, ending the season with one touchdown and five interceptions. As a result, Miami eventually reinstated Fitzpatrick, but after his disastrous showing against New England, it’s easy to see why head coach Brian Flores decided the initial change at the position was warranted.

That loss to New England wasn’t Fitzpatrick’s only failure from last season. His OSM grade in Week 10 against the Indianapolis Colts was even worse, at 8.35. He might have lost the starting role again, but at that point, Rosen had already blown his opportunity. However, the season-long battle for the starting role between Fitzpatrick and Rosen isn’t relevant to the topic at hand.

The two takeaways from this data that are actually important are as follows: first, that even in a season where he performed reasonably well, Fitzpatrick still had several abysmal performances. Second, that Flores was willing to bench him in response, even though the player that replaced him was significantly more inexperienced.

Why Fitzpatrick’s inconsistency will lead to Tua starting

With the discussion of Fitzpatrick out of the way, we can finally talk about Tua. If I had to guess, I would say that he won’t start in Week 1. Fitzpatrick ended 2019 on a phenomenal note and appears to have built up a lot of goodwill with the Dolphins coaching staff. He also has the advantage of having experience with Chan Gailey’s offense from their time together in Buffalo and New York.

The current public health situation will almost certainly have a significant impact on training camp, putting Tua even further behind. As such, it’s unlikely that Tua will be able to beat Fitzpatrick out in a training camp battle, as Rosen nearly did last season.

However, all the evidence indicates that Fitzpatrick will have a disastrous performance at some point. If and when that happens, I have little doubt that Flores will give Tua an opportunity. After all, he was willing to do the same for Rosen, and if Tua is even half the player that fans are expecting him to be, he should already be better than Rosen was in 2019. So, once Fitzpatrick slips up, making Tua the starter seems like the obvious choice.

There is one major caveat to this argument that bears mentioning. If Tua isn’t healthy in 2020, he won’t start. Now, I’m not a doctor, and even if I was, I haven’t examined Tua personally, so I have no way of knowing when he will be healthy enough to play in a real game. That said, reports seem to indicate that he will be ready to play next season. If he isn’t, though, how well Fitzpatrick plays won’t matter.

Of course, there are a few other fringe scenarios that could lead to Tua not starting next season. For example, history might for once decide not to repeat itself, and Fitzpatrick sets the league on fire for an entire season. This outcome, while unlikely, would hardly be a disaster for Miami, since it would likely mean that the Dolphins would be having a successful year.

A full season of “Fitzmagic” would be spectacular to behold. Another, less optimistic possibility is that Tua turns out to be a bust, one so terrible that he wouldn’t be an improvement over even Fitzpatrick’s worst day. In that case, there would be little point to making him the starter.

However, both of those outcomes represent extreme outliers, to the point where I almost can’t envision either of them actually happening. Fitzpatrick is one of the most consistently inconsistent quarterbacks in the NFL. Aside from concerns over his injury history, Tua is one of the highest-touted quarterback prospects we’ve seen in years. It’s still possible that he turns out to be a bust, but I doubt we will find that out for certain during his rookie season.

Far more likely is that Fitzpatrick will have an off game at some point during the season and that Flores will give Tua the opportunity to start in response. When exactly that will happen, I can’t say, since predicting how Fitzpatrick will play in any given game is like trying to guess tomorrow’s weather using an ouija board. However, based on everything we saw from Fitzpatrick and the Dolphins coaching staff in 2019, it seems almost certain to happen eventually. And when it does, the Tua era in Miami can truly begin.