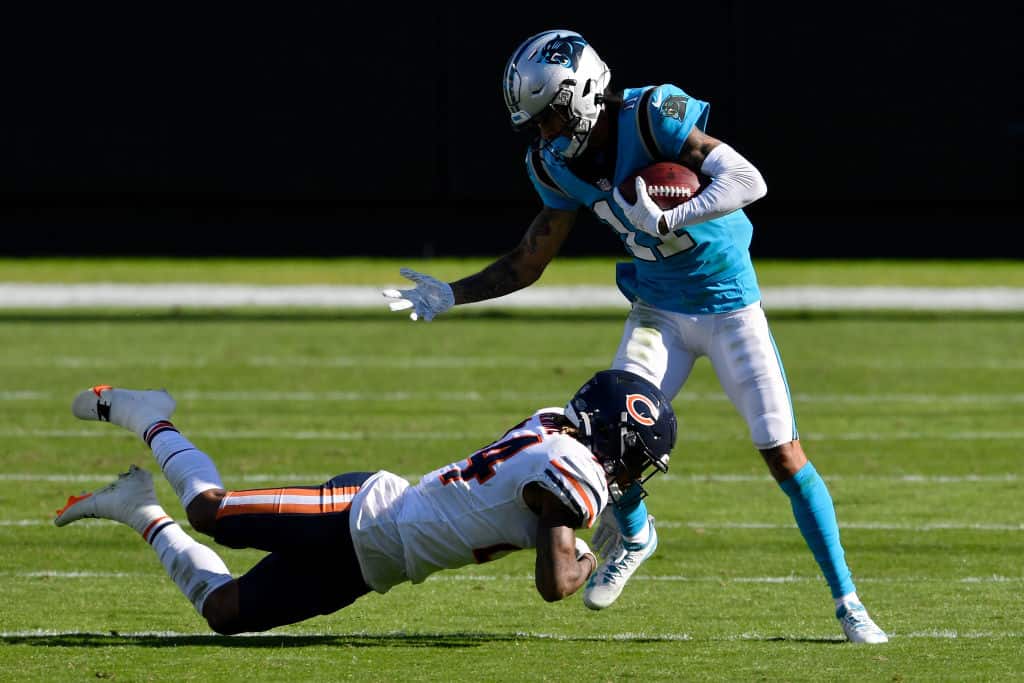 CHARLOTTE, NORTH CAROLINA - OCTOBER 18: Robby Anderson #11 of the Carolina Panthers runs with the ball while being tackled by Buster Skrine #24 of the Chicago Bears in the fourth quarter at Bank of America Stadium on October 18, 2020 in Charlotte, North Carolina. (Photo by Grant Halverson/Getty Images)
What's in this article? Click to show
Carolina Panthers (+7.5) at New Orleans Saints, Over/Under 51
Seattle Seahawks (-3.5) at Arizona Cardinals, Over/Under 56
NFL Week 7 against the spread analysis from other betting analysts

We are officially arriving at the point in the season where divisional match-ups matter due to placement in the standings and determine which off-season changes each division rival has implemented. This week, I will focus on two games that focus on division rivalries and have points spreads that present possible value before making my Week 7 NFL picks against the spread. Make sure you keep up with all of the betting team’s Week 7 plays throughout the week.

In the past seven years, both the New Orleans Saints and the Carolina Panthers have won the NFC South title three times each, and dating back to 2003; they are number one (Saints) and number two (Panthers) in NFC South titles. However, the Saints have dominated the head-to-head match-ups between these two teams recently with a 6-2 record.

The recent difference between these two teams comes down to stability and consistency. Head coach Sean Payton and quarterback Drew Brees have led the Saints consistently for the last 15 years. The Panthers have had three different head coaches during that time frame and have fielded 11 different starting quarterbacks during the same period.

The Panthers are in the midst of a rebuild with a new head coach in Matt Rhule, a new offensive coordinator in Joe Brady, a new starting quarterback in Teddy Bridgewater, and many new starters on both sides of the ball.

On the other hand, the Saints are attempting to make the playoffs for the fourth year in a row with a roster of starters they have become accustomed to over the last few years.

Everything in this Week 7 NFL spread should lean towards the Saints under normal rebuilding circumstances; however, the Panthers seem to be ready to contend this year rather than turning this into a multi-year process.

Both of these teams rank in the upper echelon regarding offensive firepower in the NFL this year. They each are top-five in completion percentage, top 10 in percentage of drives that result in a score, and top-five in rushing touchdowns. The main difference between these two teams is the type of scoring they do.

The Saints boast the fifth-best offense in the league this year, are averaging over 30 points per game, and are top-five in fewest turnovers allowed. The Panthers are bottom 10 in the league in points per game at 23 but have also kicked the most field goals in 2020. This translates to them being able to move the ball down the field but struggling when finding the end zone.

As the Panthers continue to develop within offensive coordinator Joe Brady’s offense this year, we can expect to see more touchdown drives and fewer drives resulting in field goals. If the Panthers can convert one more drive per game into a touchdown rather than a field goal, they will be a top-10 offense in the league.

When building a competitive roster, would you rather have a group of young, energetic, and hungry players? Or would you instead create one based on experience, wisdom, and advanced mechanics? This game will provide an interesting magnifying glass on each approach.

The Saints have a total of seven out of 25 players on the defensive side of the ball with three years or less experience in the NFL. The Panthers, on the other hand, have 16 out of 25 players on their defense with three years or less experience. Will the young defense of the Panthers keep veteran Brees in check, or will he exploit their raw and naïve skill sets? Will the veteran Saints’ defense consistently disrupt Bridgewater’s timing, or will he and the Panthers use speed and agility to break open this game?

I think these teams are a lot closer in talent than what many are expecting to see. The Panthers seem to have a great coaching staff in place, and if they can fine-tune key topics like turnover margin, penalties, and touchdown conversions, they can easily become a top-tier team sooner rather than later.

Jessica’s Pick: Panthers +7.5. For a divisional game between two difficult opponents seeing each other for the first time this year, such a large spread in Week 7 of the NFL season seems too high. I expect Rhule and Brady to have the Panthers ready to go for this match-up and rely on efficient and accurate passing from Bridgewater as well as tough running from running back Mike Davis as they have all year long. They will make critical stops and keep this game close from start to finish.

Statistically, the Seattle Seahawks and Arizona Cardinals are both top 10 teams in offensive scoring; however, their approach to getting there is entirely different.

The Seahawks have officially become a pass-first team behind quarterback Russell Wilson rather than the run-dominate offenses of seasons past. They are top-five at passing yards per game (280) and middle of the road at rushing yards per game (115) even though they are still a top 10 rushing team regarding efficiency at 4.9 yards per carry. This switch from a run-first to a pass-first offense has catapulted them to the best scoring offense in the league at 33.8 points per game.

The Cardinals are a run-first, run-second, and run-third team that is led by their young, scrambling quarterback Kyler Murray. They currently boast the third-best rushing attack in the NFL at an average of 161 yards per game and 5.3 yards per carry.

This seems to be partially due to the fact that Murray sits outside of the top 15 in every significant statistical category involving passing. His completion percentage ranks 16th in the league, his passing yards per game and yards per pass rank 20th, his 10 passing touchdowns are tied for 13th, and he has thrown six interceptions this year, which is tied for the fourth-most in the NFL.

These two NFC West rivals are also complete opposites when it comes to their defensive strategies as well. It is well documented that the Legion of Boom no longer exists for these Seahawks in Week 7 of the NFL. They allow a league-worst 471 yards per game to opposing defenses, with 370 of those yards coming through the air. This could partially be attributed to the fact that opposing teams have to throw the ball more to keep up with Seattle’s high scoring offense, but it is also due to their porous secondary.

However, Seattle is top 10 at stopping the run, allowing only 3.9 yards per carry and 100.8 yards per game. It will be interesting to see whether the Cardinals change their approach and focus on passing against a subpar Seahawks secondary or if they will go head-to-head with the Seahawks stout front seven and force their run-first mentality.

The Cardinals rank in the top 10 of most defensive categories but have also not faced a seemingly stout offensive team this far this season. The most challenging offense the Cardinals have faced so far is the Detroit Lions, who have the 15th best scoring offense in the league at 26.6 points per game. With Wilson’s scrambling ability and efficient run game, the Seahawks will be the first real test for this young and revamped Cardinals defense.

Another critical factor in this match-up is the fact that this is an NFC West divisional game. Both teams will be motivated and with high emotions, and I expect the Seahawks to perform the way they have all season long. They are also coming out of their bye week and have prepared for the Cardinals for two weeks.

An interesting stat in this match-up is that the Cardinals have not beaten the Seahawks in Arizona since 2012 – Wilson’s rookie season. They perform much better in Seattle, where they have a 5-3 record against the Seahawks since his arrival. Will the trend continue this week with another Seahawks victory in Glendale?

Jessica’s Pick: Seahawks -3. The Cardinals have not beaten any team with a winning record besides the San Francisco 49ers. The Seahawks are a Super Bowl contender and have veteran leadership in Wilson to guide them to another deep playoff run. The Cardinals are stagnant offensively, with their run game being the most significant threat yet still underperforming compared to expectations.

This Week 7 NFL spread is low because they are division rivals and the Cardinals showing last week against the Dallas Cowboys. In my opinion, the Seahawks move the ball freely in this game and make enough stops to beat the Cardinals by a touchdown.

NFL Week 7 against the spread analysis from other betting analysts

The timing of the Raiders bye is crucial to my thinking here. Las Vegas having a bye week after upsetting Kansas City means they won’t have the usual let down teams get after a huge win like that. Meanwhile, Tampa Bay just had a monster win over Green Bay but now has to travel west and deal with a potential let down. Perfect spot for the Raiders.

Dallas, even with Andy Dalton at quarterback, has too much firepower for mostly punchless Washington. And the Cowboys receivers should run wild against that secondary.

Atlanta is finally on the board with a victory and returns home against another lousy defense that they have too much firepower for, Detroit. Also, Atlanta is in that same mode as last year. The season is lost, and they start playing well.

There’s an established pattern with Cleveland. They can’t beat superior teams, but against teams on the same level or clearly inferior the Browns will win. The Bengals fall into the clearly inferior group.