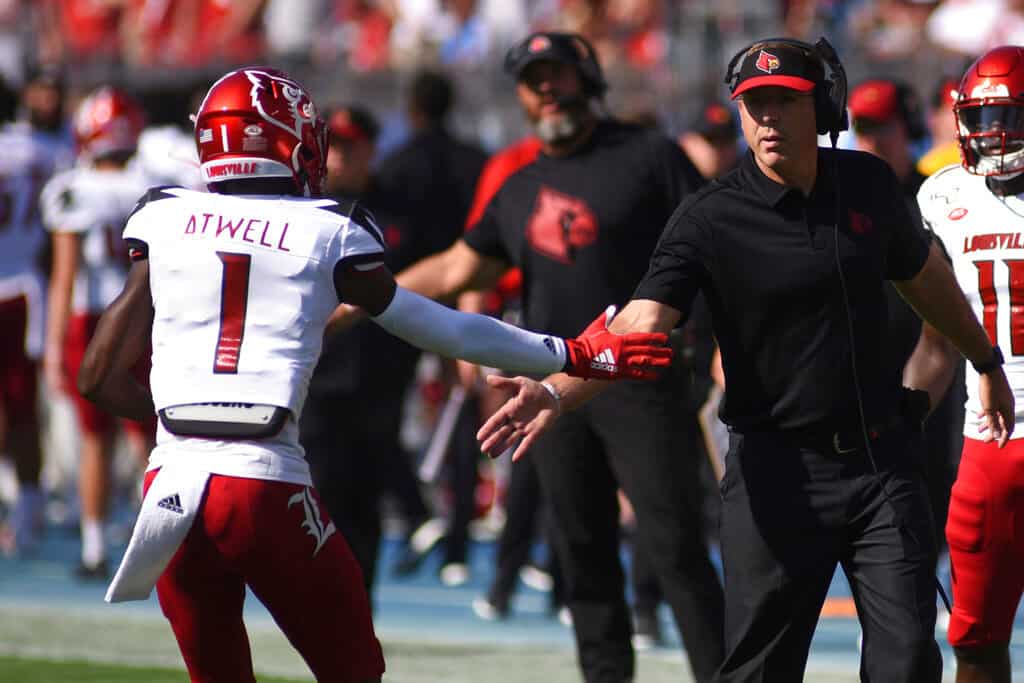 Photo Credit: (AP Photo/Mike Strasinger)
What's in this article? Click to show
1200-plus yards as a sophomore, highly decorated in high school
Atwell possesses track speed and ballerina balance
Does Atwell’s size work against him?
What should his draft stock look like today?

There’s been a rather large paradigm shift throughout the National Football League over the past few seasons. It took teams a few years to catch up to rule changes in the NFL, but once they realized that defenders couldn’t bully receivers down the field, they started to trust speed and agility over size and strength in skill position players. That is particularly evident at wide receiver, with guys like Marquise “Hollywood” Brown (166 pounds) and KJ Hamler (178 pounds) going high in the draft. But Louisville WR Tutu Atwell’s size might be even more of an outlier. So, the question is, how small is too small?

1200-plus yards as a sophomore, highly decorated in high school

Atwell averaged nearly 20 yards-per-catch as a true sophomore on 69 very nice catches. The jitterbug receiver from Miami Northwestern Senior High School actually played quarterback, where he passed for over 4,000 yards throughout his career as a four-year starter. Let that sink in. This young man started as a freshman in high school at his size. And lest we forget, he also won the Miami-Dade County Player of the Year Award as a senior.

The only thing more fun than watching 320-plus pounders huffing it downfield to make a tackle is short guys whose legs move so fast they look like a hummingbird on the football field. “Hollywood” was a bit more of a longer strider when he really opened it up, but Atwell reminds of Hamler, who was very much someone who had the straight-line speed and ability to stop/start on a dime.

Atwell’s feet are efficient, and with the lack of weight on his frame and his foot speed, he easily gets in and out of hard cuts that can leave defenders flying by to his front. But he isn’t just a lateral player either. He has legitimate juice in a straight line, and the ability to maintain high speeds as he leans inside to turn the corner and up the sideline, erasing pursuit angles along the way.

As a route runner, he still has some ways to go, and the offense he’s in doesn’t necessarily showcase or test his skills often, as he runs a lot of slants, crossers, bubbles, posts, and go routes. Hopefully, as a junior, we get to see a more complex route tree that showcases his footwork and allows him to isolate against man coverage from the slot.

Does Atwell’s size work against him?

Unfortunately, unequivocally, yes! In his 78 touches as a sophomore, he fumbled the ball four times. And as someone with the kind of agility and pop with the ball in his hands, teams are going to want to get him the ball early on manufactured touches. He’ll need to become stronger so defenders aren’t able to simply strip the ball from his grasp.

That said, he works admirably over the middle of the field, particularly for someone his size. Never once during games viewed did he cower over the middle of the field, even where danger was imminent upon the catch. He just needs to be more cognizant and secure the ball tighter than he wants so he doesn’t get stripped as he secures and turns upfield.

Very much like Hamler, Atwell’s catch radius and hands overall leave a lot to be desired. He will make some incredible concentration catches along the sideline, but his ability to secure passes downfield when he really has the jets on is lacking. A few times when he had to hit 6th gear to catch up to a pass he simply didn’t track it well into his hands, producing a drop.

This is a tough question because there are so many good receivers in this potential 2020 class. It would behoove Atwell to gain 10 or 15 pounds to gain some strength, even if it means sacrificing a bit of speed overall. He’ll still most likely be a sub-4.4 40 guy, and his on-field agility speaks for itself. If he can end up around Hamler’s size overall and clean up his fumbles and drops even just a little, there is a very good chance Atwell ends up hearing his name called on day two.

Because the rumors are, in fact, true. Speed kills.