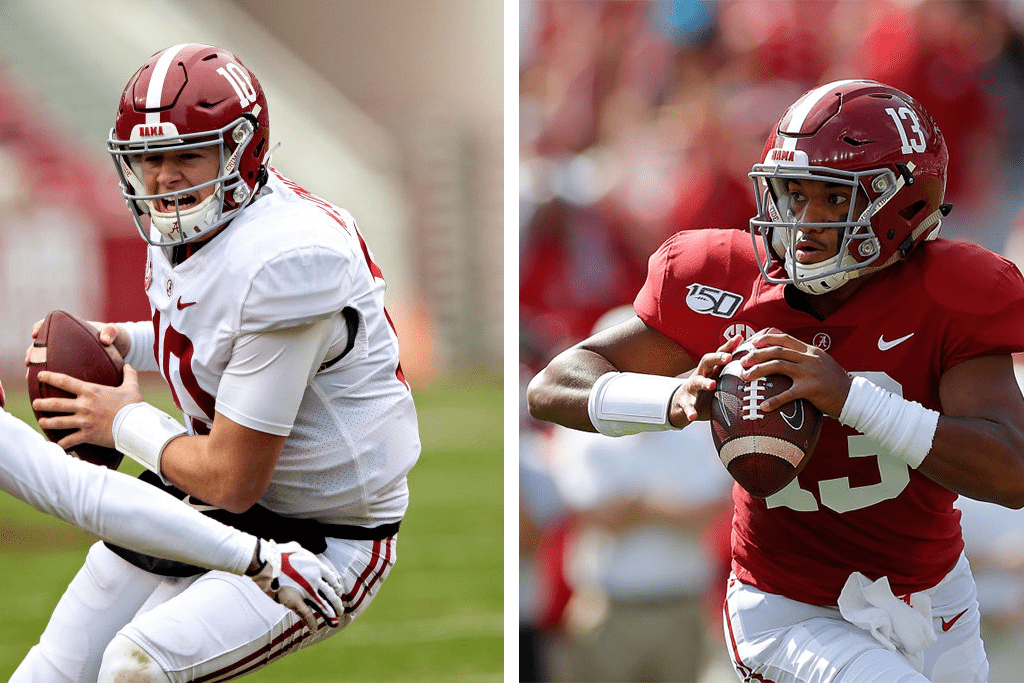 Heisman Trophy winner DeVonta Smith answered a question during a Senior Bowl interview, much to the chagrin of every Dolphins fan in the world. When posed with pitting former Alabama QB Tua Tagovailoa vs. Mac Jones against one another, Smith did not hesitate to answer when he said it was Jones. Albert Breer categorized the answer as “bold and definitive.”  The comments didn’t just open the door to questioning whether Jones is the better quarterback and prospect for the NFL Draft, it ripped them right off.

However, Tagovailoa had his own hashtag before his hip injury. The #TankForTua movement was a big deal. If it weren’t for a horrific hip injury and impossibly good year from LSU QB Joe Burrow, Tagovailoa would have been the top overall pick. Is Mac Jones at that same level?

The position (and league) has evolved in recent years

This is important to keep in mind during the Tua Tagovailoa vs. Mac Jones discussion. The 2011 Collective Bargaining Agreement slashed practice time in the NFL. Look at the current young NFL quarterbacks at the top of the food chain: Patrick Mahomes, Josh Allen, Deshaun Watson, Dak Prescott, Lamar Jackson, Justin Herbert, and Kyler Murray. They are all different quarterbacks, but they all have one thing in common and that is mobility.

We could try to qualify this until we’re blue in the face. Where is the cutoff? Well, it’s completely arbitrary. You know it when you see it. Tom Brady is often used as an example of a statue in the pocket. Although he lacks athleticism, his escapability is otherworldly, and he’s a 20-year NFL veteran. He processes information in his sleep.

The same goes for Drew Brees, Philip Rivers, and Ben Roethlisberger. All can survive, and in some instances thrive, without having dominant physical tools, and it’s because of that veteran savvy.

The younger generation of quarterbacks doesn’t get the time to get to that level mentally in the NFL. It takes years and years to get there. Franchises no longer accept that. Failure, even early in one’s career, is not allowed. Teams no longer stick with a guy through the hard times.

Jared Goff went to the Super Bowl in 2018 and never endured a losing season as a full-time starter as the first overall pick. The Rams dumped him and traded picks away for Matthew Stafford. Jameis Winston signed a one-year, $1.1 million deal as a free agent after the Buccaneers released him.

There is no more grace period in the National Football League. That could be because there are young quarterbacks who lack the instant processor, but that can use their legs to create as a passer or pick up third downs as a runner.

Tua Tagovailoa vs. Mac Jones: Tale of the tape

This is not debatable. Tagovailoa was both forced off his spot more in his time as a passer as an Alabama QB and is conspicuously better at creating when he abandons the pocket.

Tagovailoa has an elevated feel for pressure, unlike most quarterbacks. It allowed him to manipulate the pocket and create new throwing windows. He doesn’t have the ability that Burrow or Herbert do throwing on the run, but he was still often able to make the necessary throw on the hoof.

He was always less willing to take the check down and instead would opt to extend plays and try to allow receivers to uncover in the intermediate areas. However, even Tagovailoa, who most felt was mentally ready for the NFL game and able enough athletically to create, struggled in his first year in Miami. Some even believe the Dolphins should consider sending the farm for Deshaun Watson.

Jones suffices in certain situations where he’s moved off his spot. He’s shown the ability to move around the pocket and deliver passes to receivers in the middle of the field without his feet set. However, in 196 pass attempts I charted, only 11 came outside of the pocket, either by design or by necessity. That will not be possible at the next level. There will be no camping in the pocket like some of you do in Call of Duty: Warzone.

How I define “pocket passer”

Some believe the idea of a pocket passer means a player cannot put one foot in front of another in a manner fast enough to move past the line of scrimmage. That, frankly, is disrespectful to any professional football player. Even Peyton Manning scampered in a few touchdowns in his day.

It means that when the defense wins a rep, has receivers covered, and stays responsibly within their rush lanes, the quarterback can not create a play with his feet either extending to pass or to pick up the sticks on the run.

Neither Alabama QB has an arm that will make you write home about. Tua Tagovailoa’s arm is on the lower end of the spectrum in terms of velocity. However, there is a threshold to hit as an NFL quarterback, and his arm does that. He never struggled to push the ball downfield. Tua could generate enough velocity with a sturdy base to fit balls into windows.

Jones also has an NFL arm. It’s definitely enough to survive off from a velocity standpoint, particularly if his processing ability continues to progress. There are times where he’s throwing to a receiver about to drive back to him in man coverage, and he’s forced to drive it with all he has. It gets there quickly and accurately enough.

His misses down the field and particularly outside the numbers can fall a bit flat and die out before making it to his receiver. There are times he doesn’t drive it to the outside shoulder versus inside leverage, and if he’s late, he struggles to push it deep enough.

Both Alabama QB’s are everything you could ask for mentally at the position. Both Tua Tagovailoa and Mac Jones are top-end distributors within the confines of the offense. Having Steve Sarkisian cultivate an offense for both players to succeed helps immensely. However, both quarterbacks ran the Alabama offense at a high cognitive level.

Both showed decisiveness and the ability to throw receivers open and with anticipation, particularly on routes breaking back to the quarterback. Neither appeared particularly flummoxed by poach or trap coverages, either. This means that even when things defensively got a little complex, they did not struggle to adjust on the fly and quickly find weaknesses in the particular defensive looks.

Full transparency, having Jerry Jeudy, Henry Ruggs, DeVonta Smith, and Jaylen Waddle help with that cause because they add so much confidence on the Alabama QB’s end.

First, it is vital to have a general overview of how I chart ball placement. It’s a complicated and admittedly subjective system but an excellent exercise to help general objectivity beliefs through numbers. What this means is the “eye test” is used here. However, the numbers don’t always compare favorably with the picture painted in my brain. It keeps me honest.

Overall, I charted 155 passes from Alabama QB Tua Tagovailoa past the line of scrimmage and 135 from Mac Jones. Tagovailoa correctly placed 110 of those passes for a percentage of 70.97%. Conversely, Jones was “accurate” on 85 of them for a 62% clip. Yet, that doesn’t bother me too much.

The demand for perfection in the shorter areas is more strict. With a player whose perceived struggles at the next level might be “making the NFL-level throws” to the intermediate and deep areas outside the numbers, what I was more interested in was passes traveling 10+ yards down the field.

Featured | Trevor Lawrence or Zach Wilson: Who is QB1 in 2021 NFL Draft?

Jones threw a higher percentage of passes in games viewed past the 10-yard mark than Tagovailoa with 85 attempts to Tua’s 78. This is most likely due to the higher volume of RPO’s with Tagovailoa taking snaps. Surprisingly, it was passing between the hashes that bothered Mac Jones.

It’s Tagovailoa. His rookie season might give some buyer’s remorse, but that is just the impatient world we live in. Sarkisian and the offensive line at Alabama afforded Jones a comfort that allowed him to strike at an incredibly efficient rate. His best hope at the next level is to go to a situation that won’t ask too much of him, at least early on.

He most likely goes before the Saints pick, but that is an ideal landing spot for him. Jones’ lack of creativity is his biggest flaw. If the modern game has taught us anything, it’s that, at least early in a player’s career, nothing helps supplement success more.