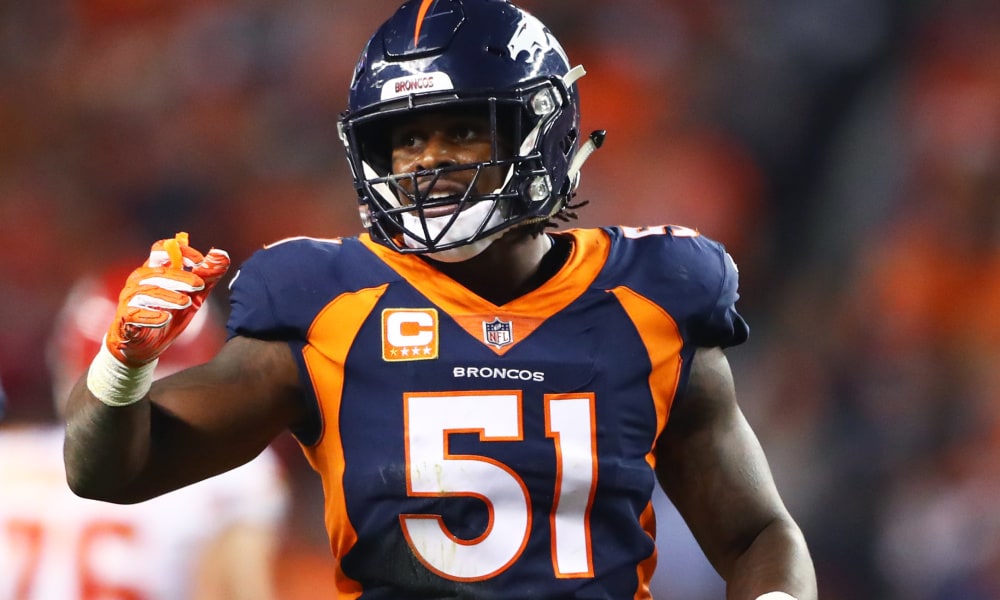 With the 2020 NFL season inching closer and training camp officially underway for the Denver Broncos, we’re going to continue our ongoing training camp preview series and take a look at the Broncos inside linebackers for 2020. In 2019, the Broncos saw the emergence of second-year linebacker Alexander Johnson under head coach Vic Fangio. Could we see the emergence of another young linebacker in 2020? Will there be a surprise player to make the final roster over a veteran player? In this article, I’m going to break down the inside linebacker position for the Broncos in 2020, featuring some important battles to watch out for before the season begins.

Favored starters at inside linebacker for the Broncos

In 2019, Denver was in a transition mode of sorts on the defensive side of the ball. When Fangio became the head coach, the inside linebacker position became an area of notice for fans and analysts alike considering Fangio’s history with the position and the success he’s had with players like Patrick Willis, NaVorro Bowman, and former Bronco Danny Trevathan.

Last season, Denver decided to start second-year linebacker Josey Jewell and veteran linebacker Corey Nelson when Week 1 came around. Nelson only lasted two games as the starter before veteran linebacker Todd Davis took over the starting job next to Jewell. Davis, who had been criticized by fans previously for his play, played exceptionally well and kept his job for the rest of the season, even leading the Broncos in tackles.

In a contract year, Davis is looking to show the Broncos why he deserves to stay in Denver long-term. Fangio’s defensive scheme has always been extremely friendly and productive for inside linebackers, and it showed in 2019 for Davis. A year after posting 114 tackles and a missed tackle percentage of 11.6%, Davis recorded 134 total tackles and improved his missed tackle percentage to 4.3% in 2020. While Fangio and the Broncos may look to move on from Davis in 2021, he won’t go out without proving his worth.

Alexander Johnson looking to level up as a starter

When Alexander Johnson signed as an undrafted free agent with the Denver Broncos in 2018, the team was taking a big leap in signing the former Tennessee Volunteer. In 2019, Johnson was one of the players who was consistently talked about as a player who may not make the final roster, but his level of play during the preseason was enough for Fangio to keep him around. This decision was well worth it.

Johnson made the first start of his career when the Broncos played the Chargers during Week 5 of the 2019 season, and Johnson showed why the Broncos were wise to keep him around. Johnson exploded on the scene with 8 tackles, 1 tackle for loss, 2 pass breakups, and a crucial interception of Philip Rivers in the endzone to secure the Broncos victory. Johnson’s athleticism and high football IQ make him an ideal long-term option for the Broncos at inside linebacker and the perfect fit for Fangio’s scheme. John Elway found a diamond in the rough with Johnson, who could easily be a Pro Bowl candidate this season.

Who will be the rotational inside linebackers for the Broncos?

Having a steady rotation of inside linebackers who can produce in this defense will be important for the success of the Broncos in 2020. With players like Jewell, Josh Watson, Joe Jones, and rookie Justin Strnad battling for meaningful snaps, it will be important to keep an eye on these battles during training camp.

Justin Strnad’s potential impact for the Broncos as a rookie

During the 2020 NFL Draft, the Broncos were looking to add an athletic playmaker at the inside linebacker position, and they believe they found one in Strnad, their fourth-round selection out of Wake Forest. I’ve talked about Strnad in previous articles before, but Strnad’s potential impact on both special teams and defense are worth expounding on. While Strnad doesn’t necessarily stand out as an explosive athlete when looking at his Relative Athletic Score (RAS), Strnad has the potential to be a quality impact player for the Broncos defense.

PFN analyst Zach Segars alluded to Strnad’s on-field traits, saying that Strnad plays a lot faster than his 4.7s 40-yard dash time and plays with a high football IQ. His work in pass coverage is one of the most significant traits to look at for the Broncos, as they were in need of another linebacker who can work well in space and in coverage. This is ideal for Fangio’s defense, as the linebackers are regularly tasked with covering running backs out of the backfield. If Strnad can develop his skills under Fangio, we could see him contribute on passing downs and become a key contributor on special teams.

Josey Jewell and Joe Jones will battle for special teams

Like I previously stated, Jewell earned the starting role last season, but his limitations in pass coverage and an injury limited his play, along with the emergence of Johnson. While I think Jones might be the more experienced special teamer, Jewell made some crucial plays on special teams, including 2 fumble recoveries, and has more playing experience in Fangio’s system. If he can show improvement in pass coverage, he will make it difficult for the team to let him go.

Is Josh Watson a lock for the Broncos roster?

While Jewell and Jones will be the main special teams battle to look out for, Watson is a player that could sneak onto the roster. The Colorado State product was cut before the beginning of the 2019 season, even after a good performance during the preseason. However, Watson was signed to the practice squad and played in 8 games for the Broncos in 2019. He mainly played special teams, which is why he could be a sleeper to make the roster.

If Fangio and defensive coordinator Ed Donatell see something in Watson during training camp that could put pressure on Jewell and Jones, it wouldn’t be a surprise to see them take a chance on the young linebacker. Keep an eye on Watson and his battle with Jewell and Jones to be the last Broncos inside linebacker in 2020.

Who are the projected inside linebackers for the Broncos in 2020?

Pencil Davis and Johnson in as the starters for 2020. They showed enough during the 2019 season to earn the nod for the upcoming season. This duo will look to continue the success they had and help the Broncos defense stay as one of the top defenses in the league. The battle for the backup spots will be an intense one, as essentially three players will be fighting for one spot.

Strnad is a lock for the final roster, barring something catastrophic. The final spot, if the Broncos keep four linebackers as they did in 2019, will likely go to Jewell, as he produced well in special teams and has experience playing in the defensive scheme. I think the team will probably hold onto Watson on the practice squad, but Jones will be the casualty that could be playing elsewhere this season.