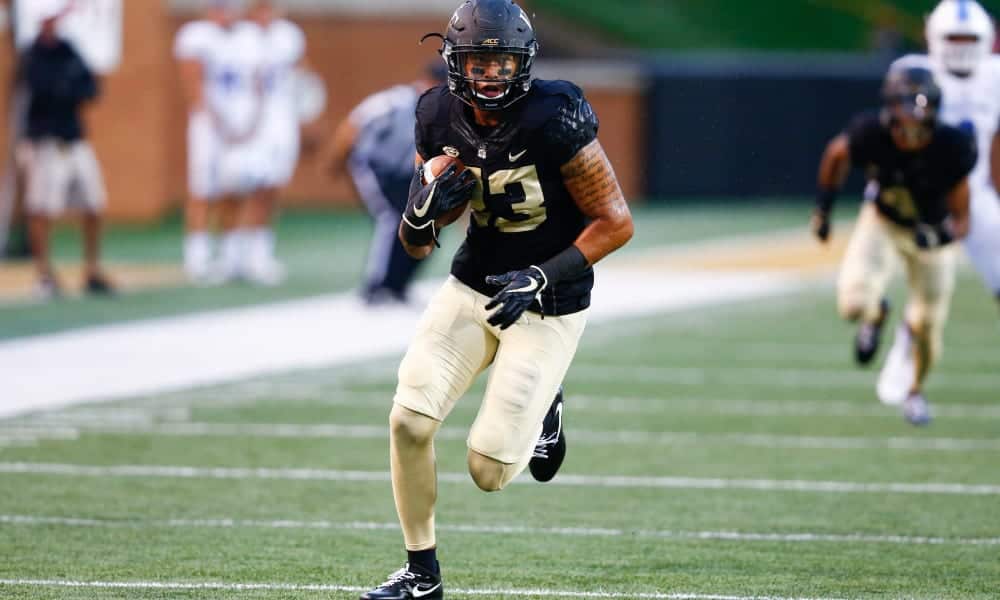 When the Denver Broncos selected Justin Strnad with the 178th overall pick in the 2020 NFL draft, they already knew what type of player they’d be getting, but they were even more invested in the type of person they were getting.

Featured | What to expect from the Broncos 2020 draft class

Coaches love players who exhibit strong traits of leadership and high character, a formula that the Broncos have strongly factored into their drafting and scouting decisions. Strnad encompasses those specific traits.

I had the privilege of speaking with one of Strnad’s coaches who had the chance to work with him every day for the last four years. Lyle Hemphill, the defensive coordinator for Wake Forest University, took the time to talk to me this past week where he raved about how much he enjoyed being around Strnad.

If you tuned in to any Wake Forest from the 2019 season, you’ll see a defense that was constantly pursuing to wherever the football was. Strnad was a big reason why. Coach Hemphill discussed how Strnad and fellow teammate Essang Bassey encompassed his philosophy as a defensive coordinator.

“That’s one of the things we emphasize to the recruiting and development is the ability to run. You gotta have guys that can run to the football. We’ve got to have guys at the second and third levels that can get to the ball. And those two guys (Strnad, Bassey) especially, if you watch a lot of film on those two guys, they obviously know exactly what they’re doing. When you know what you’re doing you can get to the football a lot faster.”

Against North Carolina, Strnad registered a game-high 15 tackles in Wake Forest’s 24-18 victory. His quick reaction time with reading a guard-pull, filling his run-fits, and tracking down plays that went away are key things that stand out from him.

What will the Broncos get from Justin Strnad?

Under Vic Fangio’s defense, play from the inside linebacker position is critical for the success of the 3-4 scheme. Veteran LB and defensive captain Todd Davis is entering the final year of his contract with the Broncos and he could play a pivotal role in helping mentor Strnad. So what will Strnad bring to the table in 2020?

“Well, there’s two things he’s going to bring: the first thing is obvious, you just look at him and he’s just a tall long kid. He’s very long. He’s 6’3 and he’s got long arms and long legs. A lot of limbs on him. That’s the first thing and that helps him and he uses his hands well.”

As the Kansas City Chiefs, Las Vegas Raiders, and Los Angeles Chargers loaded up in the off-season, it will be important for the Broncos to successfully stifle the run and defend against the pass in 2020. Strnad’s speed and use of his hands will help him transition successfully to the NFL according to Coach Hemphill.

“The second thing about him that you don’t know by looking at him— he is extremely, extremely smart. If he doesn’t know it, he’s going to work at learning it. That’s one of the things as soon as I got to meet him, I just picked up that this kid loves football, he loves to learn, he loves to get into the system and understand the inner workings of the system. You take that with his frame and his physical ability, it almost allows him to play faster. He’ll understand the defense so well that he’ll be a step faster than where he should be and he’s just so essential because he understands defense so well.”

It’s been noted by various players that Fangio’s defense can be difficult to learn, but if Strnad approaches the NFL the way he has with college, he’ll do just fine. His quick motor will allow him to play freely. In previous years, Denver has fallen under criticism surrounding their struggles with covering tight ends. Hemphill said that Strnad possesses the traits and football IQ to be an all-around versatile coverage backer.

“From my vantage point, he’s not an overpowering linebacker, he’s not one of those compact 240 lbs guys. He’s more of a tall long skinny kid, really rangy, he’s got good cover skills — he can cover backs, he can cover tight ends, he can run down quarterbacks that can move in the pocket. He’s a great kid to work with. He’s like a coach’s dream, he’s one of those kids who never leaves the office, he’s always going to be around asking questions. He’s a really fun kid to be around.”

As I mentioned earlier, one of the reasons the Broncos selected Strnad in the draft was in large part due to his ability as a football player. However, his character off the field and his work ethic was another reason.

After suffering a season-ending injury against Florida State, Strnad could have mailed it in, get surgery, and go straight into preparation for the draft. He decided to stick around campus and the locker-room to help support his teammates. Coach Hemphill described Strnad’s mentality after finding out his season was over.

“He got injured and was done for the year, and he knew he was done for the year. He didn’t miss a practice, he didn’t miss a meeting, he was in everything and at everything. During practice, he sat next to me on the sideline as we went through the script. He was fully engaged as if he was going to play the next week when he really wasn’t. That was impressive. Again he just loves the game and he wasn’t going to walk away from it. I think that speaks a lot to who he is.”

It’s a no-brainer to see why the Broncos drafted Strnad in the 2020 NFL draft. He’ll look to make an immediate impact in Fangio’s defense.

After the Broncos selected Justin Strnad, they extended opportunities to two other players who were impact players for Wake Forest in 2019. Following the conclusion of the draft, Denver would agree to terms with college free agents, cornerback Essang Bassey and wide receiver Kendall Hinton.

Bassey has generated some early buzz as one of the next college free agents to potentially make the Broncos roster. General manager John Elway has hit home runs in finding undrafted gems early in his executive career with Chris Harris Jr, and more recently with Phillip Lindsay in 2018 and Malik Reed in 2019.

Coach Hemphill told me that he relied a lot on Bassey in 2019 in regards to his ability in pass coverage and coming up against the run. “The one thing that people don’t talk about at cornerback that we utilize, is that he’s a really good tackler. He wasn’t a punishing tackler, but efficiency-wise he was excellent in terms of very few missed tackles over the course of his last three years, he was a very good tackler for us.

Bassey would come up in run support and register 60 tackles as a boundary corner. For Hemphill, he asked Bassey to do a lot, and he did so without any limitations.

As the Broncos navigate 2020 in search of a starting boundary corner and depth in the slot pending Bryce Callahan’s ability to remain healthy, Bassey could steal a roster spot if he impresses coaches during training camp. Hemphill described the overall versatility that Bassey had for Wake Forest defensively.

“We utilized him and played him a lot at boundary corner so a lot of times he was in the run fit and he showed up in the run game a lot. Coverage wise he bounced around on first and third down — he’d play corner on first down a lot of times, and he’d play nickel on third down. He can play in the slot, he can play on the outside guy. He’s pretty versatile.”

With training camp approaching in just a month’s time, Bassey is chomping at the bit to get on the field to showcase his abilities in a defensive back-friendly scheme.

Despite loading up with offensive weapons in the draft, Denver gambled on another Wake Forest free-agent with WR Kendall Hinton. Not many Broncos fans know that Hinton was originally a quarterback at Wake Forest, but transitioned into the slot for his senior season.

“He’s really good. He was a quarterback at Wake Forest during his first four years. Before his senior year, he was a quarterback, he was a really good quarterback. Then they moved him to the slot, and the one thing I’d say is that he’s extremely strong for a slot player. He’s got an outside body strength but is not quite as tall as some of the other outside guys.”

Where can Hinton fit in for the Broncos with all the talent already loaded up at wide receiver? We’ve seen how the Saints have used gadget-player Taysom Hill in New Orleans, perhaps the Broncos have found one of their own with Hinton.

“Every game that he played he got better, it’s crazy to say that but for a kid who just graduated college, but he’s got this huge upside. He’s only going to get better as he continues to play the position. We saw it on a week to week basis, he’s just looking to stack. That’s his first year playing receiver and he was dominant in the ACC. Basically, against everyone we played he was one of the most dominant players on the field, he’s got a huge upside.”

If the Broncos can get enough out of Justin Strnad, Essang Bassey, and Kendall Hinton, they might further invest in the Wake Forest pipeline that features some promising upcoming talent ahead in the 2021 NFL Draft.