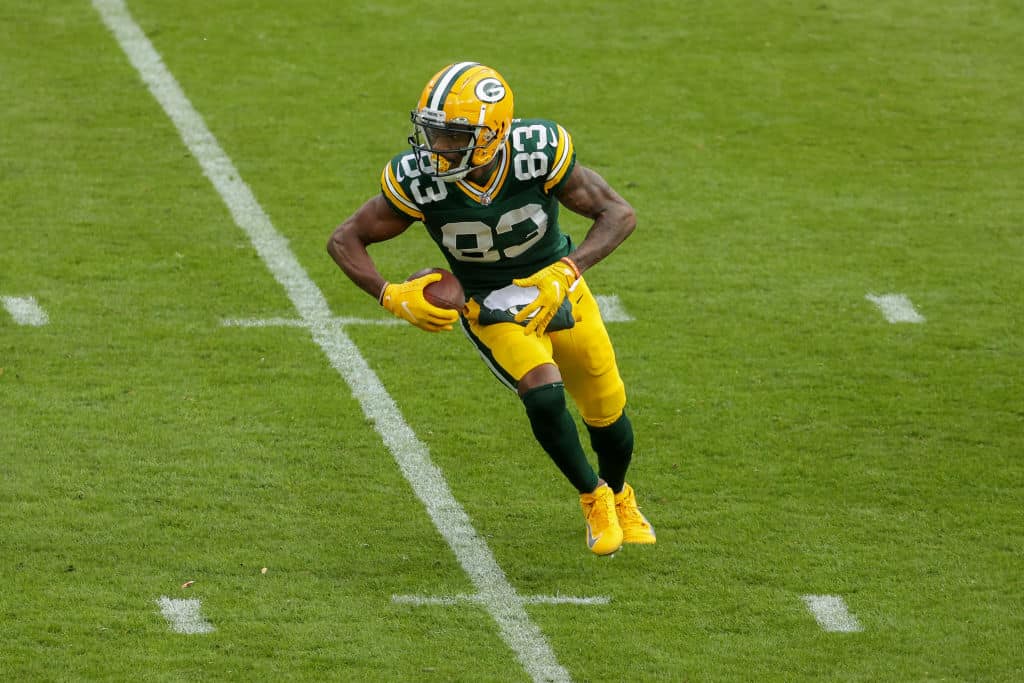 After an eventful Week 10 in fantasy football filled with breakout players, disappointments, and injuries, it’s time to look ahead. With four teams on bye in Week 11, fantasy owners will need to carefully consider potential replacements as we are now in crunch time and closer to the playoffs. So who are some of the early waiver wire pickups to target in Week 11 for your fantasy lineups? Let’s look at who is deserving of those priority claims.

While Stafford has been inconsistent in his play as of late, he has put up 275+ yards and three touchdowns in two of his last three games. On top of that, he did it against two of the strongest pass defenses in the Indianapolis Colts and Washington Football Team. With how poor the Lions’ defense has played this season, they’ve been forced to pass quite a bit. That is a trend that will continue for the remainder of the year.

Despite being without Kenny Golladay, Stafford is a worthy waiver wire pickup as he has a plus matchup in Week 11 against the Carolina Panthers. This is the same Panthers squad who gave up 341 passing yards and four total touchdowns to Tom Brady in Week 10 as well.

A remarkable story in its own right, Smith has been able to overcome a severe leg injury and numerous operations to be back on the field. Not only that, but Smith has suddenly become fantasy football relevant with two straight games of 325+ passing yards.

He has a decent pass-catching group in Terry McLaurin, J.D. McKissic, and Logan Thomas. Smith may not hold a high ceiling in an offense that still leaves something to be desired, but he certainly will see plenty of opportunities to throw throughout the rest of the season. He ended up with nearly 400 passing yards on 55 attempts in Week 10 and now faces a weak Bengals defense who gave up 333 passing yards and four passing touchdowns to Ben Roethlisberger in Week 10.

Winston wasn’t asked to do too much when he played the second half for the Saints in their blow-out win against the San Francisco 49ers after Drew Brees exited with a rib injury. He finished with 64 yards on 6-of-10 passes with Taysom Hill looming and finished with 45 yards rushing on eight carries.

Brees’ Week 11 status is up-in-the-air at this point, with him missing the back-half of Week 10 and undergoing x-rays and an MRI. Brees was already banged up entering Week 10 with a throwing shoulder injury, and it may be fair to wonder if the Saints sit the 41-year-old starter no matter what his tests come back, especially with an easy matchup against the Atlanta Falcons on tap. If Winston garners the start, he’ll very much be in streaming conversation for Week 11.

Running back waiver wire pickups to target in Week 11

In what has been a mess of a backfield to figure as of late, Hines may have done enough to help separate himself from Jonathan Taylor and Jordan Wilkins. Hines had a combined 17 offensive touches (12 carries, five receptions) while neither Taylor nor Wilkins had more than nine touches in Week 10.

Hines looked like a complete back with 115 yards from scrimmage and two total touchdowns as he was a big reason why the Colts won their pivotal matchup against the Tennessee Titans. While Hines’ ceiling will be capped because of Wilkins and Taylor still being in the game plans, he is a safe RB3/FLEX moving forward with potential RB2 value in PPR leagues as one of the top waiver wire targets for Week 11.

After flashing some skill in Week 9 with 38 yards rushing on seven carries, Ahmed took on a lead back role with 21 carries and one reception for 92 scrimmage yards and a touchdown. The Dolphins seem to have another young, talented running back on their hands. With Myles Gaskin going to miss at least one more game, Ahmed could be in line for another start even with Matt Breida nearing a return and Jordan Howard plus Patrick Laird also in the backfield mix. He may find himself as a high-end RB3/FLEX option for Week 11.

After Justin Jackson was placed on injured reserve, Ballage was once again utilized as the lead running back for the Chargers. While he only averaged 3.8 yards per carry on 18 attempts (68 yards), he also had 34 receiving yards on five receptions, leading to a 100+ yards from scrimmage performance.

The Miami Dolphins proved to be a tough opponent, leading to the Chargers playing from behind and not helping the game-script for Ballage. The Jets are on tap for Week 11, which should prove to be an easier matchup and allow Ballage a better chance at getting into the end zone. He’ll be a low-end RB2 this week as Jackson and Austin Ekeler continue to be out.

While “MVS” has only seen 10 targets over the last two weeks, he has turned it into six receptions for 202 yards and three touchdowns. This could very well be a flash in the pan, especially with Allen Lazard potentially returning for Week 11, but it’s tough to ignore Valdes-Scantling’s impact and production as of late.

He isn’t someone to trust week-over-week, but there is a mouth-watering amount of big-play potential that makes him worthy of being rostered in fantasy football leagues. Even in a tough matchup against the Colts, MVS would be a high-ceiling, low-floor WR3/FLEX if Lazard doesn’t suit up.

After seeing seven targets in Week 9, Pittman took on even more responsibility as the Colts’ leading wide receiver with seven receptions and 101 yards on eight targets. Even with TY Hilton on the field, it’s clear that Pittman is the Colts’ number one receiver. That won’t change anytime soon with Parris Campbell still on injured reserve and no other viable receiver in sight.

Pittman will be one of Philip Rivers’ top targets moving forward and has a potentially juicy matchup against the Packers in Week 11 if Jaire Alexander misses that game as well. He’d be a high-end WR3/FLEX play as one of the top waiver wire targets this week.

While Reagor has only racked up seven receptions, 63 yards receiving, and one touchdown (with one two-point conversion) on 13 targets in his two games since returning from the injured reserve, Reagor is a wideout to target on the waiver wire. His issue is not performance or opportunity but more so the inconsistent and disappointing play of quarterback Carson Wentz.

Nonetheless, he had the highest target share of any player in Week 10 and should continue to see at least five-to-seven targets a week as one of the Eagles’ starters opposite Travis Fulgham. He has a potentially strong matchup in Week 11 against a lowly Cleveland Browns defense.

Meyers continues proving that he is the new number one receiver for Cam Newton and the Patriots. He led the way with five receptions and 60 yards on seven targets in a game filled with a constant downpour, limiting either team’s ability to pass. He also had a trick play that saw him complete a 24-yard touchdown pass as well.

The Patriots will continue to keep finding ways to involve Meyers and keep him heavily featured. Already flirting with WR3/FLEX value, Meyers may dip into low-end WR2 territory going forward. He has a much better matchup in Week 11 against a putrid Texans secondary.

It’s hard to really like what you see from the Rams passing offense. Jared Goff has struggled to stand out, and some of his box scores look a lot better than they really are. Reynolds is continuing to get more and more involved in their gameplan though, with at least eight targets in each of the last three games. He’s also coming off a season-high eight receptions and 94 yards, leading the way even with Cooper Kupp and Robert Woods in the mix.

Reynolds has a tougher matchup against the Tampa Bay Buccaneers in Week 11, but he nonetheless needs to be picked up as the Rams have easier matchups in Week 12 and beyond that Reynolds could hold WR3/FLEX value in.

After getting another week to shake off the rust from his injured reserve stint, Reed led the way for all 49ers receivers outside of Brandon Aiyuk with five receptions and 62 yards on six targets. While that may not sound like much, that’s all it takes to give Reed a top-six performance at the tight end position in PPR leagues. He’s expected to continue seeing a prominent role on a team that will be forced to have a heavier pass-game script than usual because of their injury-ravaged defense. Reed should be considered a top-10 tight end moving forward for the remainder of the fantasy football season.

Even with Kyle Allen out for the season and Alex Smith taking over at quarterback, Thomas hasn’t lost a beat for fantasy football owners. He has 60+ yards receivers and/or a touchdown in three of his last four games and just posted a season-high 66 yards receiving in Week 10. While Washington isn’t expected to throw 50+ times per game on a regular basis, Thomas is valuable in the wasteland known as tight ends in fantasy football as he is one of Smith’s most trusted targets. Thomas will once again be a top-10 option in Week 11 in a plus match-up against the Cincinnati Bengals and is one of the top waiver wire pickups this week.