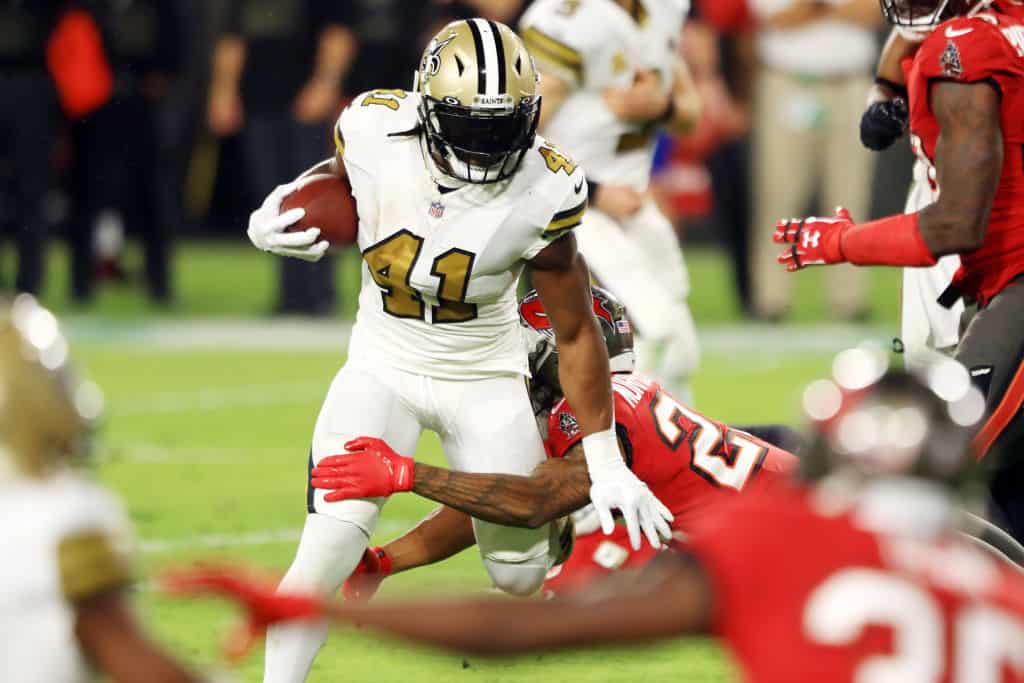 TAMPA, FLORIDA - NOVEMBER 08: Alvin Kamara #41 of the New Orleans Saints runs with the ball during the first half against the Tampa Bay Buccaneers at Raymond James Stadium on November 08, 2020 in Tampa, Florida. (Photo by Mike Ehrmann/Getty Images)
What's in this article? Click to show
What to keep in mind heading into Week 11 and searching for the best fantasy football running back
Fantasy RB Rankings Week 10: Sleepers, must-starts, potential busts
Fantasy RB Rankings Week 11 | The best of the rest
Want more fantasy football analysis and news?

We’re flying through the fantasy football season. Whether you’re currently in the playoffs or hoping to force your way in, our Week 11 fantasy football running back (RB) rankings are here to help you gain an edge over the rest of your league.

Also, make sure to check out our Week 11 WR rankings.

Make sure to check out PFN’s fantasy bye week schedule to keep up to date on who you will need to replace in your lineups. For Week 11, the four teams that are on a bye are the San Francisco 49ers, New York Giants, Chicago Bears, and Buffalo Bills.

You won’t be losing any superstar RBs this week, but Raheem Mostert, Jerick McKinnon, Wayne Gallman, David Montgomery, Zack Moss, and Devin Singletary have all been useable throughout the season. If you’ve been relying on any of them for your team, then you’ll have to do without this week.

You should always keep an eye on injuries, but this week it’s more crucial than ever. Christian McCaffrey, Chris Carson, and Joe Mixon all missed Week 10, and we’ll update our rankings if they’re unable to play in Week 11.

Note: Please keep in mind that these are PPR RB rankings. PPR in fantasy means that a running back gets an additional full point for each reception. This can play a big factor when deciding on which guys to get into your lineups and makes volume all that much more important.

Alvin Kamara is the most targeted running back in the league, and it isn’t particularly close. He already has 60 receptions on the season and is on course to smash his career-best marks for rushing yards and receiving yards. This game could be a shootout, and Kamara is the Saints’ most dangerous player. Look for him to get plenty of the ball against a struggling defense, and I expect him to be the top fantasy football running back in Week 11.

If he’s healthy, then the Panthers have shown that they intend to go back to McCaffrey as their workhorse. He didn’t look as if he’d missed a beat in Week 9, and the Lions can’t stop anybody.

The Colts are playing well on defense this season, but Derrick Henry showed that teams could still run on them as he rushed for over 100 yards. Jones hasn’t put up big rushing numbers in many games this year, but he’s a useful option in the passing game. He’s still finding the end zone regularly, and the Packers continue to create scoring opportunities.

After being forced into a committee to begin his Eagles career, Sanders’ talent looks to have won out. He’s dominated the opportunities when in the lineup, and the Eagles receiving corps returning to health should open things up for him.

It’s clear that the Steelers want Conner to be their feature back. Any time you can get a player with his workload in a game that his team is expected to be leading by multiple scores and looking to run the ball often, you have to take it.

The fact that it feels harsh on Henry to have him at seven shows how well he’s playing. He’s going up against one of the league’s top defenses, though, and the Ravens will want to use their running game to keep the ball away from him. Despite being arguably the best runner in the NFL, his lack of targets in the passing game leaves him susceptible to being leapfrogged by other players. He remains a top-10 fantasy football running back.

If Carson is ready to go, he’ll slot right back in as the lead RB for the Seahawks. DeeJay Dallas has filled in admirably in his absence, but he shouldn’t threaten Carson’s volume. The game should be a shootout, and Carson will have plenty of opportunities to find the end zone.

Elliott (and the Cowboys offense in general) has struggled since Dak Prescott’s season-ending injury. The Vikings can’t stop anybody at the moment, though. They have one of the worst defenses in the league, and Elliott has maintained a heavy workload throughout the season despite his lack of recent productivity.

The Jaguars should be chasing this game, but they’ve made it clear that Robinson is their guy no matter what. He rarely leaves the field, and they’ll continue to run the ball even when trailing. The Steelers defense has been excellent so far this season. Their run defense is outstanding and will make production hard to come by, but Robinson’s volume ensures that he stays a top-10 fantasy football running back.

Fantasy RB Rankings Week 11 | The best of the rest

Tier 6: The best of the rest fantasy RB rankings in Week 11

Tier 7: The best of the rest fantasy RB rankings in Week 11