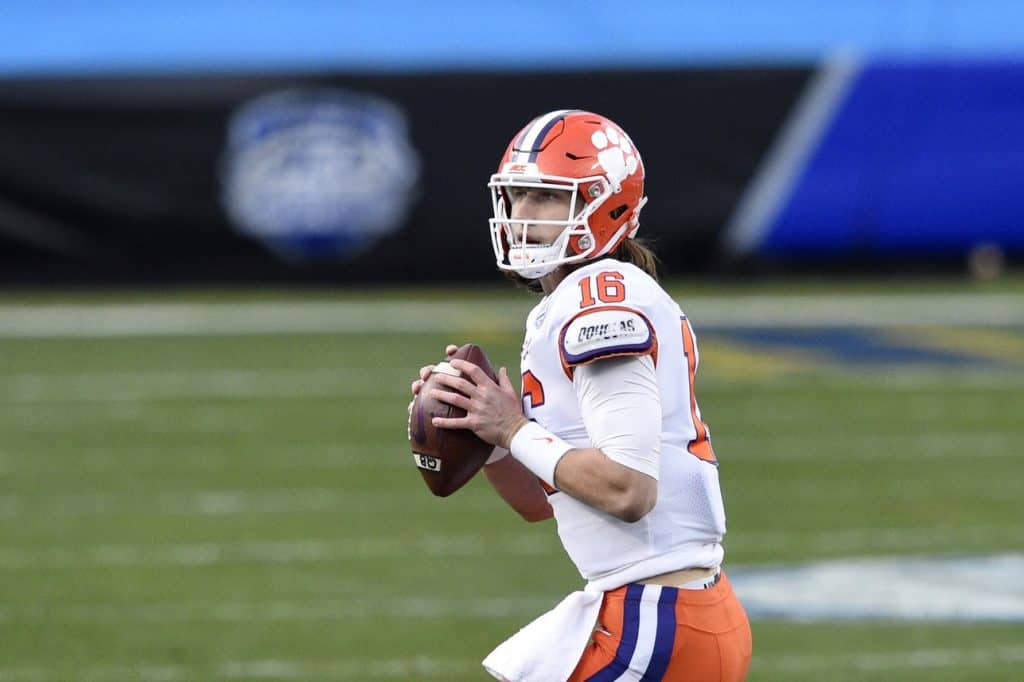 The top of the 2021 NFL Draft class of quarterbacks might be unprecedented. The amount of physical upside present in them certainly is. April 29 will be fascinating theater. We all have our favorites, but we must go into this exercise understanding that statistically speaking, only three of the top five quarterbacks will succeed at the next level. Their landing spots will be essential to their future success. All of the top five quarterbacks have the tools to succeed at the next level.

Who of the next group of quarterback prospects is your favorite? The Pro Football Network consensus board has ours.

One of the most unfortunate side effects of the COVID-shortened 2020 season was the opt-out of Jamie Newman. Seeing Newman play for a powerhouse Georgia squad would have answered many questions about him as one of the top quarterbacks in the 2021 NFL Draft class.

Newman has a well-stacked-together frame and has the ability as a runner to make defenders miss and slip off weaker tackle attempts. He generates good velocity from a plethora of bases and shows flashes of great ball placement against draping defenders. His upside is evident when you watch him, but he must become more consistent in his accuracy.

Newman provides scheme versatility given his ability to run RPO and read-option concepts. If he can continue to progress mentally and improve his overall pocket maneuverability and awareness, Newman has the upside of a starter at the next level, and as a backup, will provide that versatile skill set necessary.

Kyle Trask‘s usage in the Dan Mullen offense was a bit frustrating. He rushed the ball 64 times (college football includes sacks) in 2020, but it felt like four times that.

Trask is a pocket passer built for the part at 6-foot-5, 236 pounds. When he delivers from an established base, he throws with fine velocity and good accuracy. He used the freakish abilities of Kyle Pitts well, leveraging passes away from defenders where only Pitts could snag them.

His inability to create out of structure like the other top 2021 quarterbacks will hinder his ability to become a starter at the next level. However, he already spent time as a backup and developed well behind Feleipe Franks in college.

Kellen Mond is one of the more frustrating prospects to evaluate. He flashes some incredible quarterback play sporadically. However, he’s riddled by inconsistency in most areas of his game, and in particular, his accuracy outside of the numbers. He appears stiff in his upper half, but that is something we’ve seen with other Jimbo Fisher quarterbacks in the past. He’s a good athlete who can create out of structure with his feet and is worth a developmental shot on Day 2 or early Day 3.

Davis Mills struggled to get reps earlier in his career due to a knee injury from high school. Still, the former top quarterback recruit has shown why so many valued him in the high school recruiting scene.

Mills has a big, loose arm and can throw with good touch downfield. He will need to improve his processing speed and fine-tune his accuracy if he wants to develop into a starter at the next level. In a quick attacking offense that can keep him from having to freestyle, he could find success.

We know Trevor Lawrence is the No. 1 QB in the class, but who is behind him?

Mac Jones was the beneficiary of a mad genius offensive coordinator, the best offensive line in the country, and a plethora of weapons that included the Heisman Trophy winner. But he gets too much backlash for what he couldn’t control.

Jones is an accurate passer who has more than enough arm to get the job done, and he has the best feel for touch passes to throw receivers open away from coverage. He showed added mobility within the pocket to create throwing windows in 2020. The physical upside isn’t on the level of the other top quarterbacks in the 2021 NFL Draft, but his accuracy and processing speed should play well at the next level.

A freakishly good athlete, Trey Lance might have the highest upside of all the top 2021 NFL Draft quarterbacks. The North Dakota State quarterback lacks reps against stiff levels of competition. Although his ceiling is silly, there is more risk associated with Lance because of that alone.

However, more people would be bullish toward Lance if he was more consistent with his accuracy. Lance stands at nearly 6-foot-4 and 225 pounds and was a 1,100-yard rusher in 2019. Lance generates outstanding velocity and has shown an ability to drop high-arcing teardrops into the bucket far downfield.

Of all the top quarterbacks in the 2021 NFL Draft, nobody has more jaw-dropping throws than Zach Wilson. Wilson’s ball placement on high-difficulty throws boggles the mind. He has a naturally quick and loose motion and creates velocity from all types of arm angles and bases.

His offense at BYU should be a nice transition to Mike LaFleur’s (most likely) play-action-heavy passing attack working off a wide-zone run scheme. Wilson needs to work on playing better within the structure of the offense, but that is coachable. His innate ability to create is special.

It’s not every day the 6-foot-3, 230-pound quarterback is both the fastest and most accurate quarterback around. Nevertheless, Justin Fields is both those things. From a tape evaluation perspective, Fields would compete for QB1 in almost any other draft class. However, we might somehow see him end up as the fourth or even fifth quarterback drafted in 2021.

It’ll be interesting to see if we ever get a real reason for his slide if he ends up going anywhere after the San Francisco 49ers. He has epilepsy, but he manages it. He’s vegan and still one of the most athletically gifted humans in the world.

Nobody covers Trevor Lawrence anymore. There’s simply no reason to at this point. Since the very beginning, he’s been the cream on top of the 2021 NFL Draft quarterbacks. He hasn’t needed coverage because very few people question his status as a prospect.

Lawrence is long, lean, and athletic with a fantastic arm. He’s naturally accurate and possesses the ability to work through coverages quickly and deliver timely footballs. The offense made things easier for him, but knocking him for what is not under his control is how we end up letting Justin Herbert fall to QB3 despite the physical gifts.