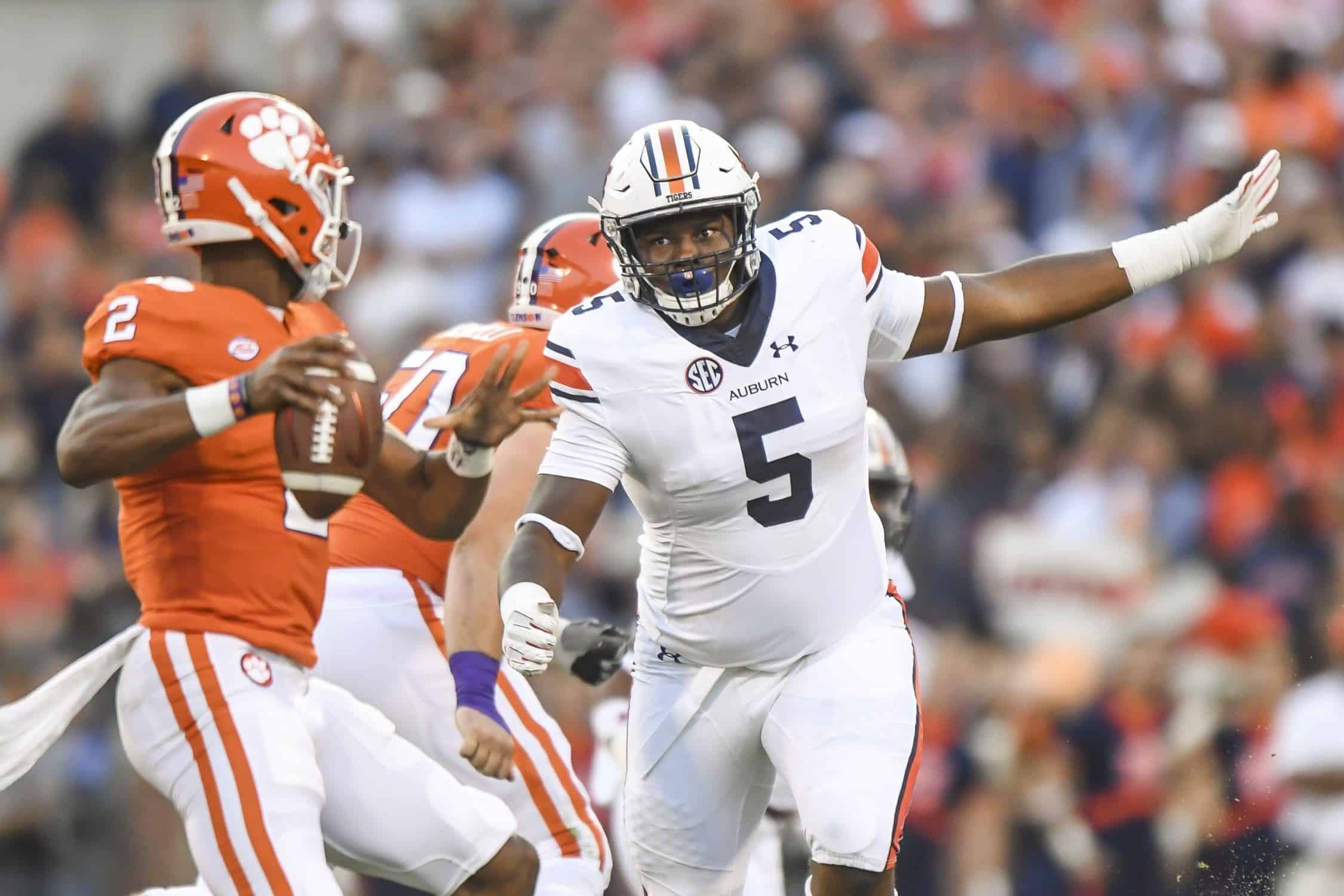 The highlight of Rivalry Weekend was the Alabama-Auburn contest which came down to the final minutes and offered several outstanding performances by highly rated NFL prospects.  Yet that was not the only game which saw top next level prospects stand out, as three potential first-round picks make our risers this list week.  Here is the final edition of the Risers & Sliders column for the 2019 college football regular season.

Derrick Brown/DL/Auburn:  Brown is a prospect I’ve gushed over the past two years and someone I graded as a top-12 pick a year ago before he decided to return to Auburn.  He’s displayed dominance the past two seasons but took his game to another level against Alabama.  Brown’s final numbers during the contest included 7 tackles, 3.5 tackles for loss and 1 QBH.  This despite the fact Alabama double-teamed Brown for most of the game and made sure he was accounted for on every snap.  The numbers only tell a portion of the story, as Brown turned in several game-impacting plays during critical moments of the contest. Presently listed third on my big board, Brown is a scheme versatile defender who can line up at multiple spots upfront. Expect him to make a big jump in mock drafts around the internet in the coming weeks as his NFL draft stock continues to rise.

AJ Epenesa/DE/Iowa:  One week after I mentioned that the rumor mill has Epenesa leaning towards returning to the Iowa Hawkeyes for his senior year and scouts are disappointed in his season, the defensive end put on a completely dominant performance against Nebraska.  His numbers were incredible and included 14 tackles, 5 tackles for loss, and 2 sacks.  Epenesa is a big, strong three-down defender and though not the pure edge rusher many make him out to be, he plays tough, smart football and offers a large degree of scheme versatility.

Isaiah Simmons/S-LB/Clemson:   There were a number of times I could’ve listed Simmons as a riser this season. Yet he was so dominant against South Carolina, I feel obligated to include the junior this week.  Simmons led the team with 10 tackles while adding 2 tackles for loss, 1 sack and breaking up 1 pass.  He’s an incredibly athletic defender with the ability to impact the game in a variety of ways.  I don’t believe he’s a prospect for everyone, as Simmons is a bit of a ‘tweener – a linebacker with safety size.  Even with that being the case, a creative defensive coordinator will have a field day using Simmons.

John Simpson/G/Clemson:  Simpson came into the season with high grades and high expectations from scouts and it’s fair to say he’s met them.  He was dominant during the Tigers wipe out of interstate rival South Carolina and won the day against Javon Kinlaw, the Gamecocks highly-rated defensive tackle.  Simpson is a powerful and wide-bodied blocker best in smaller areas.  He’s not a lineman for everyone but should be a day two draft pick for a team that does not employ a zone-blocking scheme.

Jonah Jackson/G/Ohio State:  Jackson is a player I’ve mentioned several times during the CFB game day blog this season and his performance during the Buckeyes thrashing of Michigan was so dominant he deserved to make the risers list.  Jackson blew open holes on the left side of the offensive line, making J.K. Dobbins’s job much easier all day.  He’s another small area lineman who will be a steal on the draft’s final day.

Brandon Jones/S/Texas:  Jones is someone who caught my eye two years ago with his playmaking ability and the way he forces the action.  While I gave him a third-round grade entering the season, some scouts stamped Jones as a second-round prospect.  Jones finished off the season in style by leading the Longhorns with 12 tackles during their victory over Texas Tech, which puts him atop the list of Texas defenders this season with 86 tackles.  Jones also intercepted 2 passes and broke up 4 this year.  He’s stout defending the run, shows underrated ball skills and combines both size and instincts.

Sleeper Prospect- Tariq Thompson/S/San Diego State: Thompson was someone who impressed me so much as a sophomore last season I stamped him as a draftable prospect.  He’s another safety who displayed a marked improvement in his ball skills this year.  Besides the 51 tackles accumulated, Thompson intercepted 3 passes and broke up 11 more.  He possesses the size and skill to line up as a nickel safety/special teams player on Sundays.

Small School Prospect- Xavier Lewis/CB/SE Louisiana:  Lewis was graded as a priority free agent (PFA) entering the season and the small school corner showed marked improvement in his ball skills this year.  He possesses next-level size measuring a hair under 6-feet tall and 192 pounds and plays physical football – mixing it up with receivers throughout the route while voluntarily defending the run.  Lewis posted 3 INT’s this season, added 4 PBU’s and has the skill as well as the speed to line up as a dime back in the NFL.

McTelvin Agim/DT/Arkansas:  Agim showed flashes of next-level ability as a sophomore yet still shows only flashes and never elevates his game.  His totals of 44 tackles, 10 TFL’s and 5 sacks were slightly better than a year ago and not the production scouts want in a smallish defensive tackle whose mainstays are quickness and athleticism.

Isaiah Zuber/WR/Mississippi State: Zuber went the graduate transfer route and left Kansas State for Mississippi State, which turned out to be a terrible career move.  His production, playing time and draft stock cratered this season.  After totaling 52 receptions, 619 receiving yards and 5 TD’s with the Wildcats last season, his numbers dropped to 14/211/2 this year.  Zuber was graded as a potential sixth-round pick over the summer but is likely to now end up as an undrafted free agent next April.