With uncertainty surrounding Todd Gurley in 2020, can we find value in his season-long rushing yards prop bet?

By Ben Rolfe
August 15, 2020
Jump around this article Click to show
Can we accurately project a player’s rushing output?
Is there value in Todd Gurley’s rushing yards prop in 2020?
The final verdict

Todd Gurley made the headlines twice this offseason. First, when the Los Angeles Rams released him, and then again when he returned to the state in which he made his name in college by signing with the Atlanta Falcons on a one-year deal for the 2020 season. Much has been made of what Gurley has left in the tank, given numerous injuries and much discussion about his knees. That has led to many sportsbooks viewing Gurley with caution entering the 2020 season, resulting in his rushing yards prop being placed reasonably low in comparison to other top backs in the league.

While observing the last 10 years of rushing data from the NFL for Pro Football Network’s Expected Fantasy Points (xFP) metric, it became clear that the trend between carries and rushing yards could have further utility than just for fantasy. In a similar vein to xFP, we can use the historical data to project a players rushing yards and, therefore, utilize it to examine season-long prop bets. 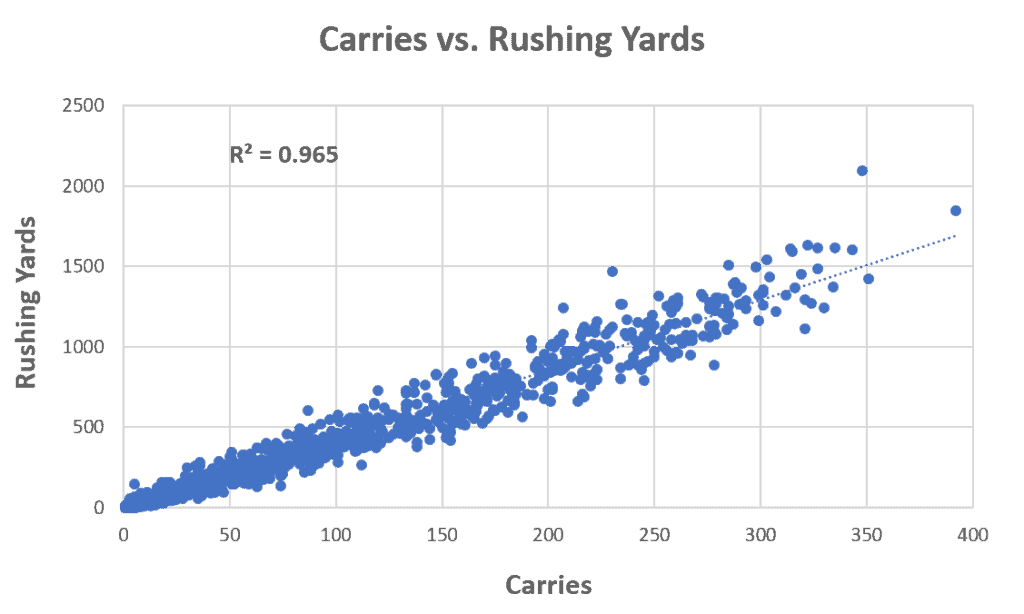 Is there value in Todd Gurley’s rushing yards prop in 2020?

Entering the 2020 season, there are plenty of question marks surrounding Gurley. Can his knees continue to hold up? Will the Atlanta Falcons use him as a bell-cow back, or will he work in a committee? That uncertainty is reflected in his current numbers when it comes to his season-long rushing yards prop bet, that sits in the 800-850 rushing yards region. Can we take advantage of that uncertainty and find a potentially profitable angle for 2020?

Gurley’s prop bet numbers actually perfectly match our example of 200 carries projecting out to around 850 rushing yards on average. If Gurley manages to get 200 carries in 2020, then recent history tells us that he should have every opportunity to top the prop bet numbers that are generally being seen around the various sportsbooks.

Does Gurley have a history of 200 carries?

In order to total 200 carries in 2020, Gurley would need to carry the ball an average of 12.5 carries per game, assuming he played all 16 games. Even if we take Gurley’s lowest games played total of 12 in his rookie campaign, he would require 16.7 carries per game to make it to 200. Given that he has played 14 or more games in each of the four seasons since his rookie year, a total of around 14.3 carries per game is a realistic expectation.

Do the Falcons historically give their backs 200 carries?

The simple answer is no, but as with any situation, things are not always that simple. Over the past three seasons, no Falcons running back has topped the 200 carry mark. Devonta Freeman got to 196 in 14 games in 2017 and 184 in 14 games in 2019. In 2018, the highest number of carries was 167 by Tevin Coleman, but he was never viewed as a feature back in his time with the Falcons.

Last season was the first with Dirk Koetter back in charge of the offense, and he gave Freeman double-digit carries in 12 of the 14 games he played. However, the Falcons spent much of the season chasing games, which did not lend itself to using a featured back. Additionally, Freeman was on a long-term deal with the Falcons, and there appeared to be an element of not always wanting to put lots of carries on his legs.

Gurley is on a one-year deal with the Falcons, and therefore, it is likely that they will not hesitate to use him heavily in 2020. Freeman saw just 56% of the Falcons snaps in 2019; a number Gurley has far exceeded in the past four seasons with the Rams. Gurley has seen over 70% of the snaps in Los Angeles in the last four seasons, so expect his snap count percentage to fall somewhere in the 60-70% region for the Falcons in 2020.

What range of outcomes could we see for Gurley in 2020?

If we set the benchmark number of carries for Gurley at 200 and then take a 10% window either side of that, we can view the rushing yards of backs that fell between that 180-220 window. In total, 83 backs have carried the ball between 180 and 220 times in the last 10 seasons. As you would expect with an average of 850 yards for 200 carries, around 40 of them have failed to reach 850 yards.

Of those 40, only 16 averaged four yards per carry or more; a number Gurley achieved in two of the last three seasons. He struggled somewhat last season, with just 3.8 yards per carry, but has a career average that sits at 4.3. If Gurley can get to that 200 carry mark with an average of around 4.3 yards per carry then topping 850 yards should be more than possible in 2020.

Wagering the over on prop bets in 2020, given the current global situation and the potential of players having to be inactive for 10 or more days at any given time, is somewhat scary. Therefore, caution is the name of the game. However, Gurley has so much talent as a back and situation where the Falcons have no reason to hold him back from carrying the ball 15 or more times a game that a rushing yards number below 850 seems far too low.

Gurley has never been under the 850-yard mark in his career and is behind an offensive line that many expect to improve this season. Therefore this is a place that I am going to place a one-unit wager on the over at DraftKings sportsbook line of 825.5 rushing yards.