How can we analyze a running back's performance when it comes to their fantasy points? Could xFP and FPD present a viable option?

The running back position can be the most frustrating when it comes to fantasy points and assessing value. With injuries and inconsistency plaguing the position it can be tough to work out who performed well and who struggled when it comes to the end of the season. One way of assessing performance is to compare a running back’s finish at the position compared to their ADP. While that is a simple assessment to do, it does not necessarily help us to project what the previous season’s fantasy point return means for the future of a running back.

Therefore, what we need is to be able to analyze a running back’s performance on a deeper level. Sure we have numbers such as yards per carry and yards per reception to help us do that, but fantasy points include those yards and combine touchdowns into the numbers as well. Here at Pro Football Network, we have the Offensive Share Metric, which tells us how a running back performs when it comes to factors within their control, but what if we could combine that information with something directly looking at fantasy production.

That is where calculating Expected Fantasy Points (xFP) for running backs and Fantasy Point Differential (FPD) comes in. In this article, I will discuss how the metrics came about, what they tell us, and how we can use them to help value players in dynasty leagues.

You can find the last five years of Expected Fantasy Points and Fantasy Point Differential for backs with an xFP>50 at the bottom of this article.

All stats regarding carries and receptions are courtesy of Pro Football Reference.

Correlating running back carries and touches to fantasy points

With running backs, the natural place to start looking for a correlation between opportunity and fantasy points is with carries and/or touches. To do this, a reasonable set of data is required, which initially was two years. When that demonstrated a reasonable correlation, the next step was to go to five years. When the correlation remained steady then, ten years’ worth of data presented the perfect combination of a large data set while keeping the numbers comparable to the current day.

Therefore, in an attempt to increase the correlation, why not look at touches instead of carries? Given that the role of a running back is evolving further and further into the receiving game, looking at touches immediately seems a better way to assess the value of running backs when comparing to fantasy points. As expected, the agreement and correlations were slightly higher when it came to touches compared to both non-PPR (R2 =0.92) and PPR (R2 = 0.90) scoring.

Comparing the effect of carries and receptions 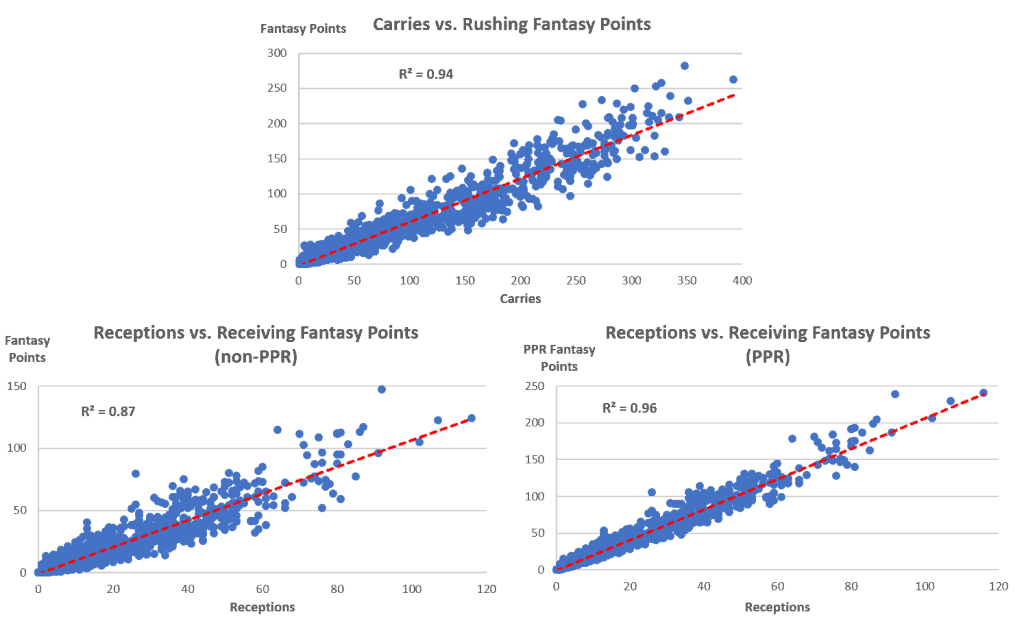 Therefore, using touches as an overall standard to calculate expected fantasy points would result in backs that primarily carry the ball being undervalued compared to pass-catching backs. That difference would be especially pronounced in PPR leagues. In order to address this, the next stage will calculate a running back’s xFP using carries and receptions separately.

Now that the method for calculating the value of both carries and receptions is established, projecting expected fantasy points for a running back is somewhat of a simple task. Using the number of carries and receptions an RB had/or is projected to have, will tell us the xFP of that player for any given season. For example, in 2019, Nick Chubb had 298 carries and 38 receptions, giving him an xFP value of 219.8 in non-PPR scoring and 255.8 in PPR scoring.

What is FPD and how is it calculated?

Fantasy Point Differential is somewhat self-explanatory, in that it is looking at the difference between expected and actual fantasy points. Now that the method for calculating xFP is established, it is a simple step to apply that number retrospectively to any running back to see how their fantasy point output compares. That number can then be turned into a percentage of the expected value, by dividing the difference between the two numbers by the xFP for that running back.

What does this tell us?

The first element is simply to review performance in a year. Fantasy points tie together so many elements of a running back’s results that by using xFP and FPD we can immediately assess whether a back over or underperformed the opportunities afforded to him.

The test for fantasy football owners, especially in dynasty leagues, is determining how to use this information. On the one hand, you may be able to take a back who scored highly but still underperformed compared to his xFP and sell them high, knowing the risk of a big drop off if the opportunities are not there in the future. However, the same goes for selling high or buying low on players. FPD can help to identify players whose success may not be sustainable, or whose tough season was not due to a lack of opportunities, but maybe some bad luck.

Translating this into a winning formula is key. At the basic level, the xFP metric can give fantasy owners an idea of how optimistic or pessimistic a running back’s fantasy point projections are for that season. However, with just a touch more research, the FPD metric can tell a story. Maybe the rookie back that struggles last season is really yet another back struggling in the same system as others have failed previously? Did the back that succeeded wildly last year lose some key pieces to his offensive line? The FPD metric simply offers insight into how a player performed relative to their xFP. The key is to then translate that data into a projection for the future.