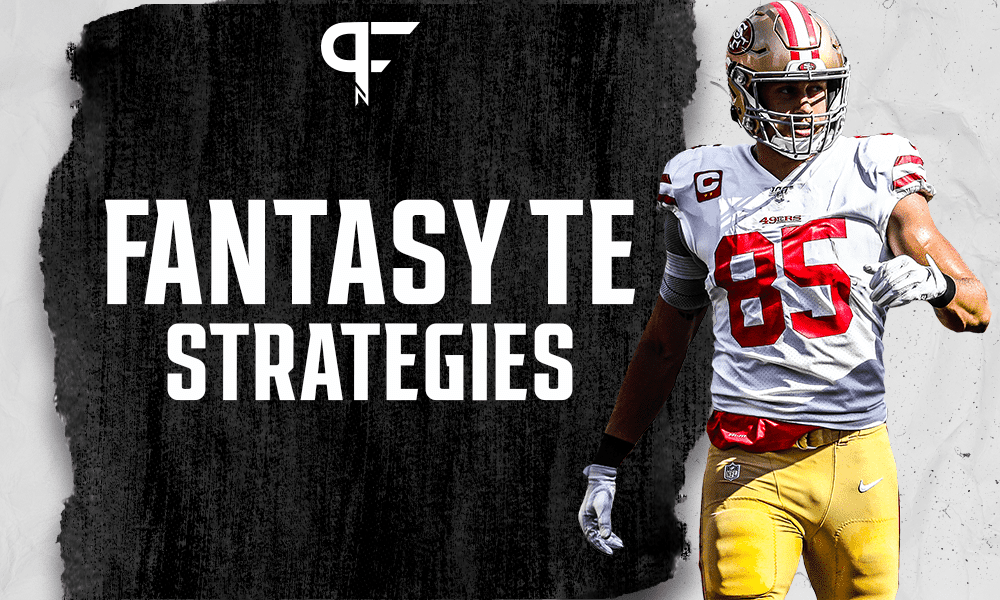 Tight End Draft Strategy: When and who to draft in 2021

By Tommy Garrett
June 16, 2021
What's in this article? Click to show
When should you draft a tight end in fantasy football?
Top tight ends to draft in 2021
Want more fantasy football analysis and news?

There are countless ways to build a team in fantasy football, but all of them start at the draft. As the tight end position is arguably the shallowest in fantasy, it becomes critical to enter the draft with a firm game plan on the draft strategy you will follow. While all have their merits, here are a few draft strategy tips to consider when making your own decisions.

When should you draft a tight end in fantasy football?

If only it were so black and white. Just a quick and straightforward “draft them in Round X” and move on with life. Yeah, that’s not how things work in fantasy football. First, you have to decide how much you value the position as a whole and if your league incentivizes tight ends in its scoring.

There is a massive positional advantage to be had if you select a tight end early. Take Travis Kelce, for example. In 2020, he scored 312.8 PPR points, which were 167.5 more points than Hunter Henry’s 145.3 (TE12). That’s a 10.4 point advantage every single week. He scored even more if you played in a TE premium format that tries to shift the position’s value to offset its traditional lack of upside.

Let’s say you want Kelce, and that is your primary draft strategy. Who do you want more? Jonathan Taylor or Kelce? That is what it might come down to as both players are going inside the first round and won’t be there when you are back on the clock in Round 2.

Kelce is special. He has led the position in scoring for the last five years, and I’m going to bet he does it again this season. He is in a tier of himself and deserves a draft strategy based solely around him.

This is the tight end draft strategy that likely appeals to the majority of people. You want an elite option but not willing to sacrifice your first-round pick on Kelce. In this range, you’ll find players such as George Kittle, Darren Waller, T.J. Hockenson, Mark Andrews, and even Kyle Pitts (more on him later).

In this range of tight ends, you are looking at players who produce similar numbers to the receivers going around them. On a per-week basis, they averaged 14.05 PPR points. But the difference is you would not be able to find anywhere close to replacement level production off waivers should injuries arise.

Tight ends are no longer just inline blockers; they are offensive weapons. That’s why in the last three years, we have seen eight tight ends cross the 1,000-yard barrier, including Kelce and Kittle breaking and resetting the all-time records.

The outlier here is Pitts. It’s pure speculation and hype driving this ADP. As we all know, rookie tight ends don’t work in fantasy football. Since 2010, only Rob Gronkowski and Evan Engram have finished as TE1s (top 12) as rookies.

Nevertheless, if you were ever going to bet on someone breaking the mold, it’s Pitts. He is on an offense that will throw over 650 times, and with Julio Jones gone, he could soak up 125 targets. No question there is a major risk, but potentially, there’s also a significant reward.

The mid-round tight end draft strategy is the last point in the draft where you will feel any sort of confidence in your tight end. They could have a few solid weeks, but outside of a handful of games against the Kelces and Kittles of the world, you are middle of the pack.

There is nothing wrong with this. After all, the position is evolving. Just last season, 19 tight ends scored more than 100 fantasy points in half-PPR formats, the most since 2016. Players like Noah Fant, Dallas Goedert, and Robert Tonyan are popular selections in this range. And for good reason.

Tonyan tied with Kelce for the TD lead amongst the position (11). Logan Thomas was the TE4 in scoring (176.6) and saw the fourth-most targets (110). Goedert will be the featured TE on the offense that targeted the position the second-most in 2020 (30.2%). Additionally, Fant was the TE8 and is one of the most athletically gifted players at the position. He is entering the critical third year when tight ends typically turn the corner.

Together, these TEs averaged 10.65 points per game, the equivalent of the WR40 or RB24.

So, you chose to punt the position and play the dart throw game. It’s a bold strategy Cotton, let’s see how it pans out.

Now, this can absolutely work if you guess right. For example, if you were early on Andrews in 2019, that was a league-winning move. In this range are guys like Jonnu Smith (this one hurts), Hunter Henry, Tyler Higbee, Evan Engram, and Rob Gronkowski.

However, this draft strategy can also put you in limbo should you put your chips on the wrong choice. From that point on, you’ll need to play the waiver wire game, scrounging together 8 PPR points per week if you guess correctly.

While I have sprinkled in some names in each of the different tight end fantasy draft strategy segments, let’s go over some of my top targets for 2021.

Travis Kelce is option No. 1

I have zero hesitation in selecting Kelce in 2021, even with his first-round draft capital. Not only am I picking a TE, but you are also getting a WR1 all wrapped up in one bundle.

Kelce set career-highs in 2020 across the board with 105 receptions, 1,416 receiving yards, and 11 touchdowns. Additionally, Kelce registered over 1,000 yards in every season since 2016 and established a new NFL record for the position last year. He averaged 20.9 PPR points per game (TE1) and would have been the WR4 in scoring. Not only do you get the best tight end, but you are drafting a top-tier receiver on the NFL’s most potent offense.

He does not miss time, and with a new 17-game schedule, Kelce could end up with over 1,600 yards in 2021, and no one should be surprised. He is in a league of his own, more than worth the draft capital it takes to acquire him.

T.J. Hockenson is a low-risk/high-upside option

If you didn’t pay attention — and in fairness, no one does to Detroit — you likely missed the season T.J. Hockenson produced in 2020. As a second-year player, Hockenson was a must-start, a rare occurrence for a tight end. He reeled in 67 of his 101 targets for 723 yards and 6 touchdowns. Amongst other TEs, he was fifth in targets, fourth in receptions, and third in yards.

The biggest factor to consider with Hockenson as part of your draft strategy is the amount of volume he can receive. In terms of just raw vacated targets from 2020, no team has more than the Detroit Lions. The losses of Kenny Golladay, Marvin Jones, Danny Amendola, and others accounted for 64.1% of the passing attempts in 2020. Furthermore, they lost players responsible for 50% of the targets inside the 10-yard line (15).

Hockenson could end the season with over 110 targets in 2021. There might be a lack of TD upside, but he will be a top-five scoring TE by the season’s end. If you chose not to go after Kelce, I would draft the TE of the top five that falls the furthest, and most of the time, that is Hockenson.

But he is a rookie, and you know rook….blah, blah I can’t hear you.

Look, I completely get it if you do not want to buy in on Pitts in 2021. You are probably smarter than I am for it. He is a rookie TE, and his ADP is now at a level where he is not even a fantasy sleeper or value in drafts (48.0 ADP per Sleeper).

Everything about him says to stay away from a logical standpoint. And yet, I can’t do it. I have called Pitts a unicorn since before the Florida spring game in 2020, and the fact he is in a better situation than I even imagined is, well, too good to pass up. He is my breakout TE for 2021.

Irv Smith Jr. could have an improved season in 2021 with a newfound role

Speaking of breakout tight ends, consider Irv Smith Jr. of the Minnesota Vikings. For those who opt towards the mid-to-late round tight end draft strategy in fantasy, this one is for you.

Although he finished as the TE33 in 2020, that is not indicative of his talent or the trend we saw last season. Smith caught 30 of 43 targets for 335 yards and 5 touchdowns, averaging 7.6 ppg. However, he was buried behind Kyle Rudolph on the Vikings’ depth chart.

In the four games without Rudolph in the lineup, Smith averaged 12.83 ppg with a 16-game pace of 60 receptions on 80 targets for 732 yards and 12 touchdowns. While I don’t expect those touchdowns to carry over, I can see Smith receiving between 5 to 6 targets a game.

Nevertheless, there have been reports that Smith will not see a more significant role in 2021 which simply does not make sense to me. Not only did the Vikings not bring in any notable pass catchers, but Kirk Cousins played his best football when tight ends were heavily involved.

Smith has the skills and the opportunity to go from a late-round TE to a mid-round TE in 2021.

Be sure to follow us on Twitter (@PFN365) to stay current with all things around the NFL and the upcoming 2021 fantasy football season beyond Julio Jones and his fantasy impact on the Titans. Also, continue to visit Pro Football Network for NFL news and in-depth analysis while also visiting our fantasy football section for more coverage and up-to-date rankings.