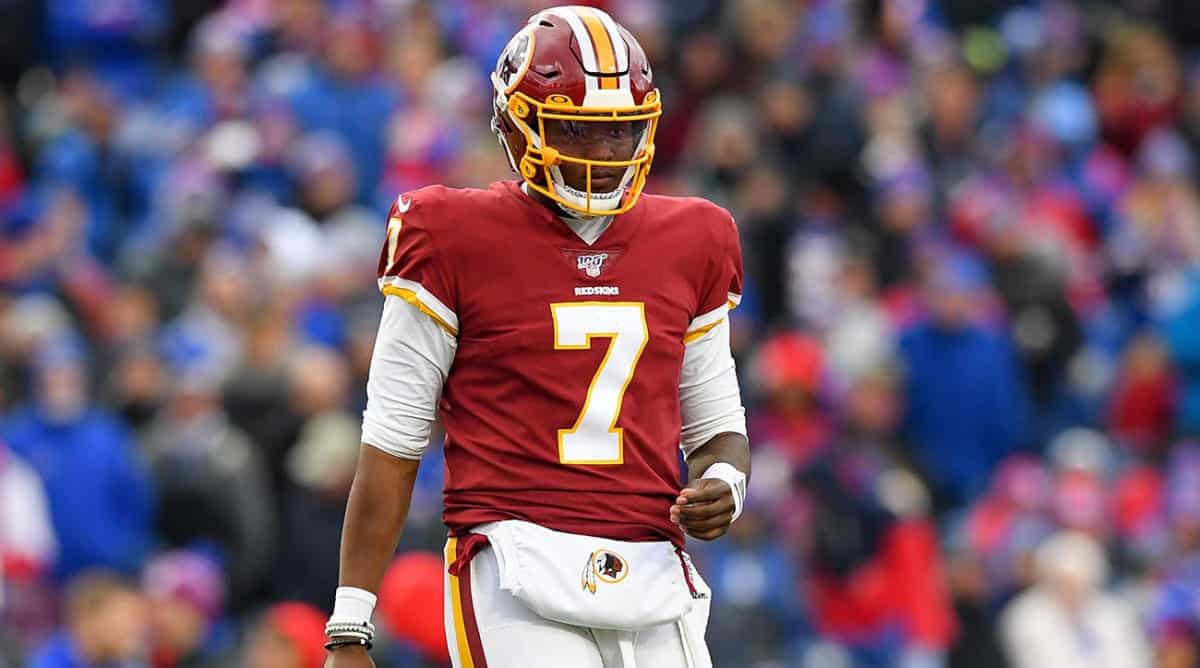 What's in this article? Click to show
Myth #1 – The Miami Dolphins prefer Oregon quarterback Justin Herbert over Alabama quarterback Tua Tagovailoa
Myth #2 – There will be 25 wide receivers selected in the first three rounds
Myth #3 – The Washington Redskins and Detroit Lions are in the market for a quarterback

In this article, we will take a look at three myths surrounding the 2020 NFL Draft. Around this time of the year, it is hard to take anything you hear seriously when it comes to a team’s intentions in the draft. NFL general managers are some of the best salesmen on the planet, and their main goal during “Draft Season” is to maximize their capital.

Whether it is a certain player they are targeting or the desire to acquire more draft picks via trades, GMs will leak information that helps them achieve their goals. The information that is leaked is not always accurate. In fact, there are many cases where front offices provide false information to mislead other organizations of their true plan.

Before we analyze the three myths surrounding the 2020 NFL draft, let’s take a look at a few examples of NFL clubs providing false information leading up to the draft, only to shock the world when their names were called. First, everything leading up to the 2018 NFL Draft had the Cleveland Browns selecting University of Southern California quarterback Sam Darnold with the first overall pick. If you looked at most mock drafts at the time, you’d be hard-pressed to not find Darnold penciled in as the Browns’ pick.

On that day, ESPN’s Adam Schefter announced that there was a real possibility that the Browns would select Oklahoma quarterback Baker Mayfield over Darnold. Well, we know how that scenario played out. Similarly, leading up to the 2007 NFL Draft, everything pointed to the Miami Dolphins selecting Notre Dame quarterback Brady Quinn. During the draft process, the Dolphins showed extreme interest in Quinn, but on draft day, they opted to take the speedy wide receiver from Ohio State, Ted Ginn Jr.

The Miami Dolphins have been rumored to have interest in Alabama quarterback Tua Tagovailoa ever since he threw the game-winning touchdown pass against the Georgia Bulldogs in the 2018 National Championship game. On an episode of his podcast, NFL Network’s Rich Eisen even said he had heard, “The Dolphins have coveted Tua from the minute he looked off Georgia’s safety and threw a dart to beat Georgia in the national championship game coming off the bench. He had the Dolphins at ‘Hello.’” It’s been one of the league’s most known secrets for quite some time. However, there has been a lot of noise inferring that the Dolphins actually prefer Oregon’s quarterback Justin Herbert over Tagovailoa.

There are many reasons why this first of three myths surrounding the 2020 NFL draft has surfaced. First, the Dolphins were apparently cold towards Tagovailoa during an interview at the NFL Scouting Combine, held every year in Indianapolis. Also, there is much here-say surrounding the notion that the shutdown we are seeing in the United States will prevent the Dolphins from acquiring proper medicals on Tagovailoa, making them take the healthier prospect. Finally, the Dolphins have put in a tremendous amount of resources towards evaluating Herbert.

Being chummy and friendly really isn’t in the DNA of Miami Dolphins’ head coach Brian Flores and general manager Chris Grier. They both have a no-nonsense demeanor. They were at the Scouting Combine to conduct business, not make friends. Since the Combine, the Dolphins did try to schedule a private workout with Tua, but that was nixed due to travel restrictions surrounding the national pandemic.

That is a perfect segue to my next point: the Dolphins will do everything in their power to fully understand Tagovailoa’s health and will be thorough. While it is true that the Dolphins have put in an extensive amount of work into Herbert, the same can be said of any of the top quarterback prospects in the 2020 NFL Draft. Whether it is Herbert, Tagovailoa, LSU’s Joe Burrow, or Utah State’s Jordan Love, you can bet everything you have that the Dolphins have done a thorough evaluation on all of the top quarterbacks in this draft class.

At the end of the day, it is a pipe dream that Dolphins’ owner Stephen Ross loves Joe Burrow so much that Miami would be willing to send all three of their first-round picks in the 2020 NFL Draft to the Cincinnati Bengals in order to select him. When the Dolphins are on the clock, Herbert will be available, but they will select Tagovailoa.

On an ESPN conference call, the Godfather of the NFL Draft, Mel Kiper, Jr., made a bold prediction that “There is going to be at least 25 receivers taken in the first three rounds.” The 2020 wide receiver group is historically good, which I covered in detail in a previous article. Jerry Jeudy, Henry Ruggs III, CeeDee Lamb, and Justin Jefferson are tremendous prospects and the main headliners of the group. The next tier of receivers, consisting of Tee Higgins, Jalen Reagor, Brandon Aiyuk, Denzel Mims, K.J. Hamler, and Laviska Shenault, will all certainly hear their names called on day two. So, there is no doubt that the 2020 wide receiver group is completely loaded.

Kiper’s prediction that 25 receivers will be taken in the first three rounds is ambitious. With that said, he isn’t too far off, as it is almost certain that we will see 15-20 wide receivers hear their names called during the first three rounds of the draft. The main reason that Kiper’s prediction is a myth is because everyone knows how loaded the wide receiver group.

If fans and draft analysts know this, you can bet your last dollar that NFL front offices are well aware of this. What does this mean? Well, if the wide receiver group is as deep as we all think it is, NFL clubs can wait on taking a player at the position and focus on selecting a position that doesn’t present as many options, such as offensive tackles.

The run of wide receivers in the first three rounds of the 2020 NFL Draft will be fast and furious, yet it will fall short of the bold prediction made by Kiper Jr.

There is a lot of smoke surrounding teams such as the Washington Redskins and Detroit Lions being potential landing spots for the top quarterback prospects in the 2020 NFL Draft. Logically, it makes sense. Dwayne Haskins improved as the season went on, but there are a lot of questions as to whether he is a big-time quarterback or not. Also, Matthew Stafford is coming off of a major injury and carries an absorbent cap number. The reality is that neither of these teams will select a quarterback in the early parts of round one in the 2020 NFL Draft.

While we saw the Arizona Cardinals give up on Josh Rosen after one season, it is not commonplace to do so. Redskins’ owner Daniel Snyder really wanted the Redskins to select Haskins in the 2019 NFL Draft, and to some accounts, even forced the front office into making the pick.

Stafford is far from the problem in Detroit. In fact, prior to a season-ending injury in 2019, he was playing some of the best football of his career. Matt Patricia’s coaching tenure in Detroit is on life support, and he needs to draft a player that makes an instant impact. After trading cornerback Darius Slay to the Philadelphia Eagles, Ohio State cornerback Jeff Okudah makes a lot of sense for them.

Sure, both the Redskins and Lions want teams such as the Dolphins and Chargers to believe they are in the market for a quarterback. Why? NFL teams are willing to pay a steep price in terms of draft picks to secure their franchise quarterback, so if the Redskins and Lions play their cards right, they might be able to move down, acquire additional high draft picks, and still land the prospect they covet. This is just a classic case of supply and demand.