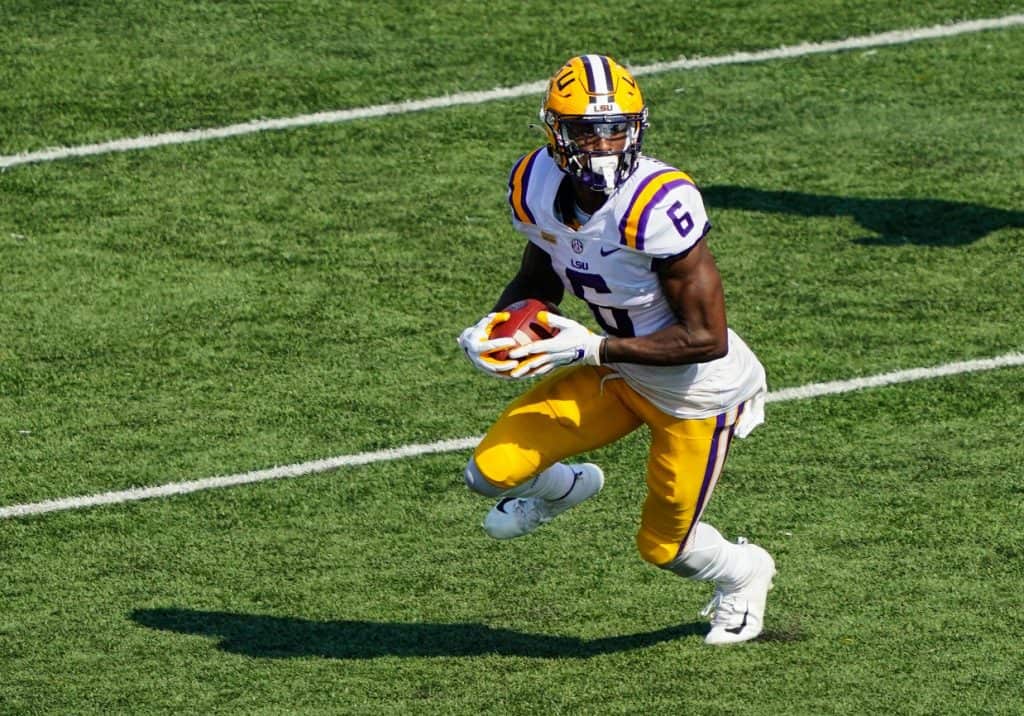 LSU wide receiver Terrace Marshall Jr.‘s dynasty draft stock has been on the rise for months. One of the favorites amongst the fantasy football community, what is Marshall’s dynasty value, and where should you be targeting him in upcoming drafts?

In dynasty, wide receivers extend your window to chase championships. Given the longer time frame where they can maintain elite levels of play, they are the foundation of your team. As a result of this, they also carry some of the highest implied value. Moreover, the 2021 class of rookies is as good as we have seen in years, making it a struggle to find value disparities amongst the top of the class.

Coming in at 6’2″ and 205 pounds, Marshall deserves to have his name mixed in with the best of this class. While at the LSU Pro Day, Marshall put on a show, soaring with a 39-inch vertical and a blistering 4.40 40-yard dash.

What also can not be overlooked is that Marshall is not just a perimeter receiver. In 2019, roughly 70% of his snaps came from the outside. Then in 2020, it flipped, as he lined up in the slot at around the same rate.

Given his size, speed, and traits, Marshall could have been a first-round pick in the NFL Draft. But with some health concerns popping up late in the process, he slipped to the second round, and the Carolina Panthers were able to snag him with pick No. 59. While this class is loaded with talent, Marshall is one of the best values as he has the prototypical size and ball skills typically reserved for players inside the first five picks.

This offense is scary, folks. Joe Brady and Matt Rhule have all the makings of dominant offense. The question is, and it’s a big one, is can Sam Darnold deliver? Marshall’s value, like all other players on the Panthers’ offense, hinges on his outcome. In his three seasons, Darnold has been the punchline of many jokes.

Playing in less than 13 games each season, Darnold averaged 2,699 yards, 15 touchdowns, and 13 interceptions. Over this stretch, Darnold was the 27th, 27th, and 30th ranked QB in fantasy, respectively, while averaging 13.5 points per game.

Can Darnold bounce back for the Panthers in 2021?

Darnold now has to facilitate quality targets to even more options in Carolina with D.J. Moore, Robby Anderson, Christian McCaffrey, and Marshall.

There is no question that Brady and Rhule are phenomenal coaches, but can they get enough out of Darnold to sustain all of these players along with Marshall?

They clearly have a role in mind for Marshall as Brady was his former OC at LSU, and no one would know how to use him better than Brady. Anderson is also in the final year of his two-year contract.

The 2021 season might be a rough year for Marshall if Darnold is, in fact, not the answer and his issues stemmed beyond just the Adam Gase effect. While I expect to see him become a consistent threat in the red zone, it might not be until 2022 with a new QB under center when we see him reach his full potential.

One more factor to consider when trying to decipher Marshall’s dynasty value is potential turnover in the coaching staff. Brady is one of the hottest names in the NFL even after just one season in the league. He was already making the rounds and interviewing for head coaching vacancies in 2020 and will be at the top of the list after the 2021 season.

There is a real possibility he could be gone after this season. Should that happen, it’s hard to tell what will happen in Carolina and what the offense might look like without knowing the replacement.

Terrace Marshall Jr. was a dominant threat even when sharing targets with other incredible WRs

Even while playing on a loaded LSU offense surrounded by top-tier talent, Marshall still found a way to dominate. After a quiet freshman year, he broke out as a sophomore. Thanks in large part to Joe Burrow and Joe Brady’s scheme, Marshall recorded 46 receptions for 671 yards and 13 touchdowns. Not bad for someone competing for targets against the presumable 2021 fantasy WR1 Ja’Marr Chase and the record-breaking Justin Jefferson.

With Burrow and Jefferson succeeding in the NFL and Chase opting out, Marshall was tasked with leading the Tigers’ offense as the primary option. He stepped up to the challenge despite the offense losing some of its ferocity of the year prior. Playing in seven games, Marshall recorded 48 receptions for 731 yards and 10 touchdowns.

Marshall is one of the most intelligent post-snap players of the class and is not talked about enough. When watching tape, Marshall routinely extended the play and worked back to the QB when things broke down. Due to this, he will be the first person the QB is going to look for at the next level.

The lone knock on Marshall is he is not a polished route runner. Entering the NFL at just 20 years old, there is plenty of time to develop a crisp route tree.

Where should you draft Marshall in dynasty rookie drafts?

The strength of this class is the depth at the wide receiver position. Running back, on the other hand, is relatively weak when compared to years prior. There is a legitimate case that by the end of the 2022 season, nine receivers from this class could be top-30 WRs in fantasy. That’s incredible, but there is a noticeable tier separation.

Chase and DeVonta Smith are the crown jewels and in a class of their own. In the second tier, we find Rashod Bateman, Jaylen Waddle, and Rondale Moore. One alpha-type receiver and the two of the best after-the-catch receivers in the class.

Tier 3 is arguably the best value in the upcoming rookie draft, with Marshall, Elijah Moore, and Amon-Ra St. Brown.

In 1QB formats, Marshall is an early second-round dynasty rookie pick even with the questions at QB. Heading into the rookie draft cycle, he is my No. 13 overall prospect. In superflex, all five quarterbacks should go ahead of him due to the positional scarcity. Thus, bumping Marshall into the mid-second round.

Wide receivers tend to be some of the safest rookie picks for fantasy as they maintain their value for an extended period of time compared to running backs. I always say to draft the talent, not the landing spot. Marshall clearly has all the talent to succeed even if there are some potential holes in the landing spot.