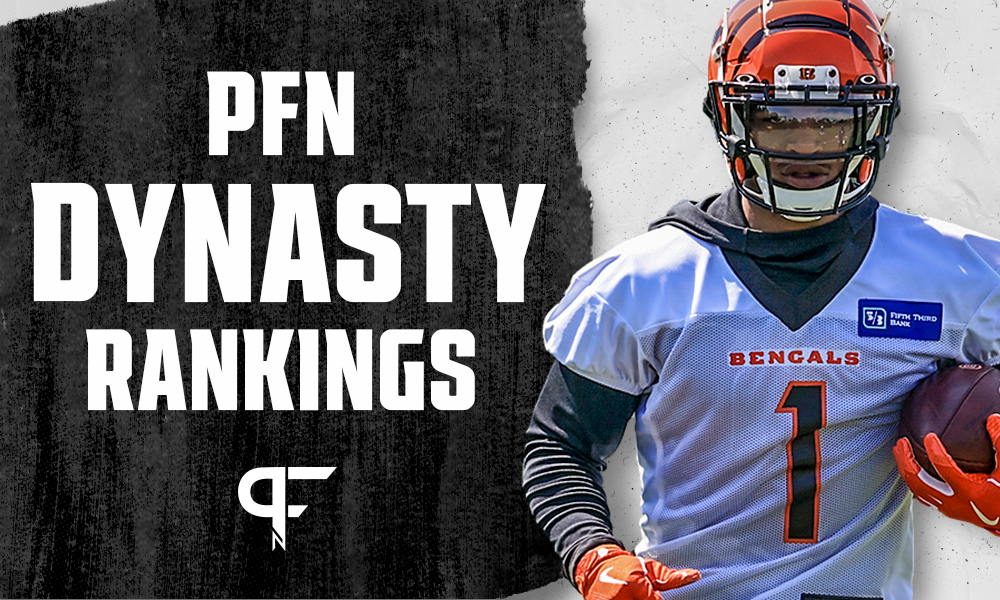 While 1QB leagues are the most popular in fantasy football dynasty startups, the fastest growing trend by far is superflex dynasty leagues. This simple change creates a drastic shift in how teams are constructed during startup drafts and beyond. In superflex dynasty leagues, no roster spot is more valuable than the quarterback position. Securing two reliable starting quarterbacks is the backbone of any solid dynasty team. To best inform you of these differences, here are our 2021 Dynasty Superflex and 1QB Fantasy Football PPR Rankings.

When building or managing a dynasty team, it is important to have a core mix of old and young wide receivers. You want to structure them with an escalating age range. Research shows that a high percentage of receivers have their peak sessions between the ages of 24 to 29. Another tip is to prioritize top performers at various positions. Here are three young receivers I am very excited about in dynasty formats.

Lamb has already shown us that he’s going to be one of the NFL’s best at the wide receiver position for the foreseeable future.

He finished last season with 74 receptions for 935 receiving yards and 5 touchdowns. Imagine what Lamb could have accomplished with quarterback Dak Prescott under center for the entire season. The duo combined for 433 receiving yards in their first five games together in 2020. It is in the realm of possibility that Lamb, Amari Cooper, and Michael Gallup all exceed 1,000 or more receiving yards in 2021. The second-year receiver is someone I’m very interested in and so should you.

Metcalf took a huge step forward in his second season. He averaged 8.1 targets, 5.2 receptions, and 81.4 receiving yards per game in 2020. Metcalf finished as a WR2 or better in 50% of his games in PPR formats last season. The 23-year-old’s WR1 performances last season were week-winning. Metcalf’s trajectory should continue to trend up in dynasty formats, especially with quarterback Russell Wilson still under center in Seattle.

Ja’Marr Chase opted out of last season to begin preparation for his NFL career. The last time he was on the football field, Chase was catching passes from current Bengals quarterback Joe Burrow. He set SEC records during the 2019 season with 84 receptions and 1,780 receiving yards. Chase was the most productive receiver on an LSU Tigers team that also included wide receiver Justin Jefferson.

The Bengals have a whopping 195 available targets entering the 2021 season. It shouldn’t take long for Chase and Burrow to pick up where they left off in Baton Rouge.

These rankings were last updated on June 10, 2021. Below, you can sort the dynasty rankings by league type, position, and rank, both overall and at the position. If you need to search for players or teams, you can do so using our filters below. Don’t forget to reset them to clear your board and start from the beginning. As injury and contract news comes in, we will be updating our rankings to make sure you are covered.

Please note: On mobile devices, these rankings are best viewed in landscape mode.

These rankings will be updated throughout the summer based on the latest news and reports coming out of training camp. If you are preparing for your rookie draft, our 2021 Rookie Rankings will give you a comprehensive breakdown of the top 20.

These Dynasty Superflex and 1QB Rankings are meant to be a reference and are not meant to be used for direct trading of one player for another. Therefore, think of these as a starting point that you can build your opinions on as you go through your own dynasty league season.