RAS: Cowboys TE Blake Jarwin is ready to make the leap in 2020

Cowboys TE Blake Jarwin hasn't yet emerged as a star, but there's room for one more headliner in the Dallas offense. His athleticism grants him such an opportunity.

By Nicholas McGee
September 2, 2020
What's in this article? Click to show
TE Blake Jarwin shows burst and explosion
Speed up the seam
Blake Jarwin is in a position to succeed

Blake Jarwin has long since been viewed as a potential difference-maker for the Dallas Cowboys. With the talent they have at their disposal in 2020, the TE is in a position to improve as many have expected.

The Cowboys signed Jarwin as an undrafted free agent in 2017 and, after minimal involvement in his rookie year and two seasons splitting time with veteran Jason Witten, he heads into his fourth year ready to make the starting tight end role his own. At the same time, Dallas is not without other options at the position. The Cowboys selected Dalton Schultz in the fourth round in 2018 and acquired Blake Bell in free agency this offseason.

However, following two years of efficient production, it is Jarwin who is set to play the majority of the tight end snaps. Cowboys executive Stephen Jones, per CBS Sports, expects a breakout season from Jarwin. Jarwin has the intriguing athletic tools to capitalize significantly on his increased opportunities and deliver a career year for an offense loaded with skill-position talent. 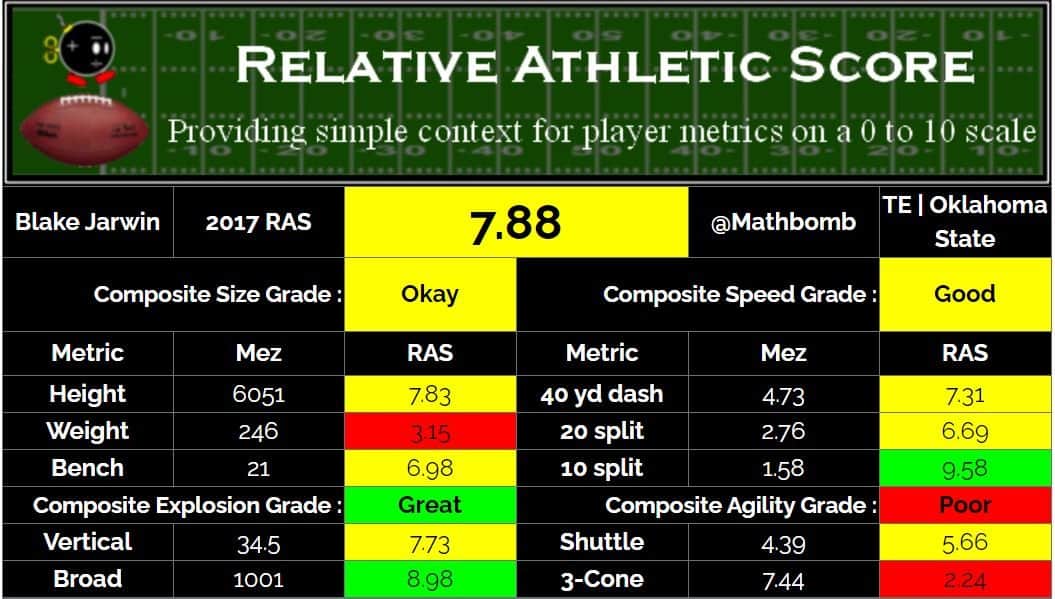 Jarwin did not manage to test as an elite athlete during his Oklahoma State Pro Day, but he received a highly respectable Relative Athletic Score (RAS) of 7.88 out of 10.

His RAS was built around a good Composite Speed grade and a tremendous Composite Explosion score, to which his performance in the 10-yard split of the 40-yard dash and the broad jump was vital. And Jarwin has used his speed and explosion to impressive effect during his three seasons in the league.

Speed up the seam

The burst Jarwin has was put to use during the Cowboys loss to the New Orleans Saints in Superdome, as he made a critical reception that set up the only touchdown of the 12-10 defeat.

Though he did not surge off the line, Jarwin found an extra gear mid-route to separate from linebacker A.J. Klein as he worked up the seam, giving a quarterback of Dak Prescott’s caliber a relatively simple task of hitting him in stride for a 30-yard gain.

Having measured at 6-foot-5 and 246 pounds, a player with Jarwin’s size possessing that acceleration presents a daunting task for opposing linebackers, who also have to deal with his physicality.

Though Jarwin’s Composite Size grade did not stand out in his RAS score, his build is comparable to elite tight ends such as George Kittle and Zach Ertz. He also has a frame that enables him to take advantage of the smaller, more athletic linebackers that are fast becoming the norm in the NFL.

Related: What will the Dallas Cowboys offensive depth chart look like in 2020

He utilized a size advantage in the Cowboys’ meeting with the Chicago Bears last year, cleverly using his hands to get away from the coverage of Roquan Smith before adjusting to Prescott’s throw to make the reception.

Jarwin’s blend of size and speed makes him a substantial problem for linebackers and safeties in coverage. Still, Dallas offensive coordinator Kellen Moore has most frequently taken advantage of his athletic gifts by devising plans to get him in space.

With Jarwin’s acceleration helping him quickly pick up yardage after the catch in the open field, such plays have proven extremely effective.

Blake Jarwin is in a position to succeed

Moore did an excellent job of getting Jarwin in space in the Cowboys’ Week 15 win over the Rams last year. Jarwin accounted for 40 yards on a single drive in the second quarter as Moore picked on safety Taylor Rapp with his play calls.

Related: How Blake Jarwin can be a breakout player for Cowboys in 2020

Jarwin’s first reception of the drive saw him rumble downfield for 20 yards after breaking free down the sideline with Rapp late in getting across the field after being picked by teammate Jalen Ramsey as the cornerback attempted to recover the separation Amari Cooper had gained.

Four plays later, Jarwin picked up another 20 yards as Rapp was again left having to make up ground after the tight end faked a double-team block before spinning out on a route towards the sideline for a gain that put the Cowboys in the red zone.

With Moore kept around by new head coach Mike McCarthy, the Cowboys offensive coordinator will have more chances to put Jarwin in the open field and more ammunition to help him do so.

Dallas’ first-round pick CeeDee Lamb was a steal with the 17th overall selection. His addition to a receiving corps that features Cooper and Michael Gallup should make disguising plays designed to go to Jarwin significantly easier given the attention that trio will likely command.

Lofty expectations for Dallas in 2020

After missing the playoffs into 2019, a resurgence is expected from the Cowboys in 2020, primarily because of the firepower they have on offense. Jarwin is an underrated part of their arsenal with the athletic traits to become a dynamic player at the tight end position.

The combination of Moore’s play-calling acumen, the quarterback play of Prescott, and the surrounding talent around him put Jarwin in the ideal scenario to make the most of his physical gifts and emerge as the latest star in an offense already filled with them.