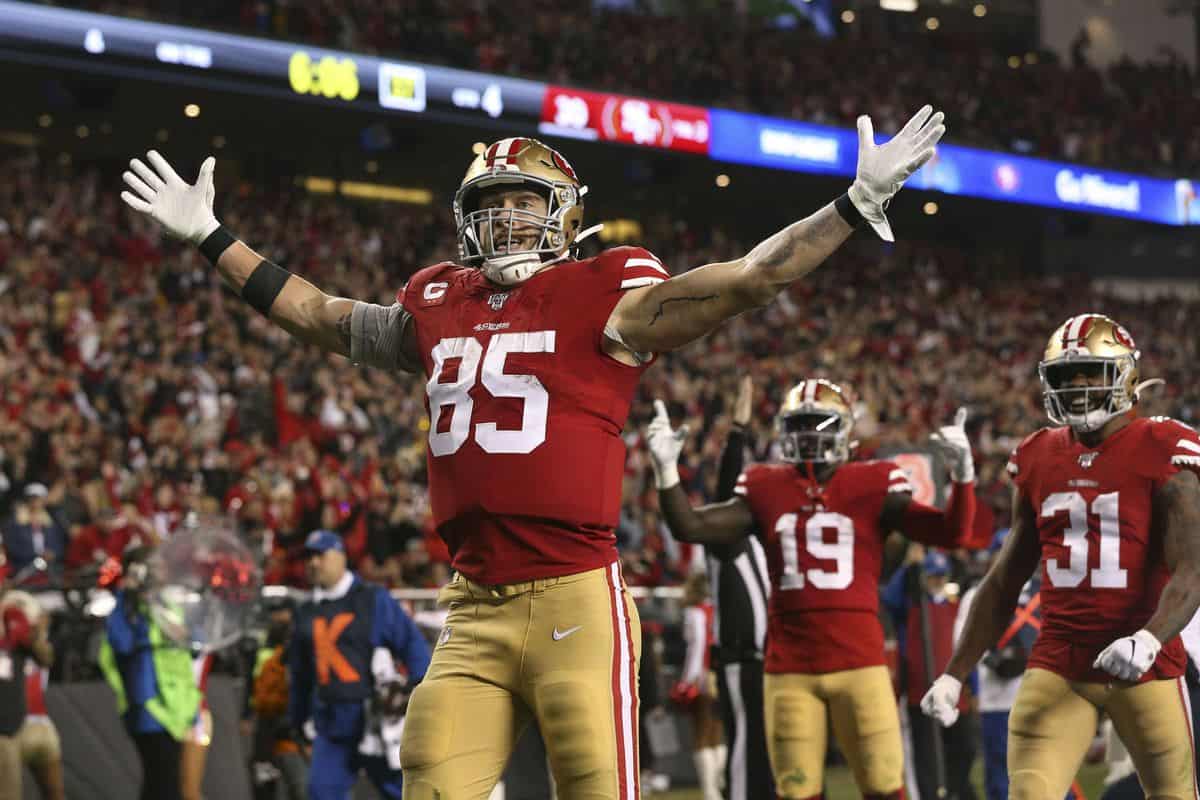 Mere hours after San Francisco 49ers George Kittle signed a record-setting deal for tight ends on a five-year, $75 million extension, the Kansas City Chiefs’ Travis Kelce entered the chat with a four-year, $57.5 million deal. If fans can take anything away from two tight ends grabbing lucrative contracts, expect NFL positions to be the least concern when general managers are writing checks.

Kittle, the epitome of a larger than life personality, has been a staple of the 49ers’ success since late in his rookie year. After productive 2017, he set the single-season record for receiving yards for the position with 1,377 yards as the 49ers leading man. And since Jimmy Garoppolo became the franchise signal-caller, Kittle has been the head honcho out in the Bay.

The same goes for Kelce, who likely will remain the second-best tight end in football with Kittle’s emergence and Rob Gronkowski’s initial retirement. Since drafted in 2013, the 30-year-old has been one of the more productive pass-catchers in the game. Over the past four years, Kelce has finished with no less than 1,000 yards, 83 catches, and four scores while leading the way to a Super Bowl victory for Chiefs Kingdom.

Kittle will now make a handsome $15 million per year. Kelce follows suit with his new deal bringing in an average of $14 million a season. Both contracts reset the record for tight ends after Austin Hooper grabbed the largest deal at an average of $10.5 million with the Cleveland Browns.

From now on, it will be paramount to scout the talent, instead of the position.

Kittle has become the face of the position over his brief tenure. The perfect balance of pass-catcher and pass blocker, the Iowa product has been active on the line of scrimmage and as a delayed receiver. While teams draft tight ends for either their ability as a receiver or production as a blocker, John Lynch struck gold on Day 3 with a do-it-all Kittle that continues to develop with age.

“When you have a guy like George who is different and is special, and it’s not just about being the best tight end in the NFL, it’s who he is after that,” 49ers head coach Kyle Shanahan told KNBR’s Murph & Mac Show Thursday following the signing.

Who the man Kittle is behind the persona is one thing. The myth on the field is beyond exceptional. Back-to-back seasons, Kittle has led the 49ers in catches, receiving yards and touchdowns with little coming close in production at two of the three categories. Making moves from the line, playing in the slot, and juking defenders out of their shoes, teammates are playing catch up in the stat line to Kittle’s production.

Since taking over as the villain of the NFC West, Kittle has earned All-Pro honors from the press twice and made the trip to the Pro Bowl in the same seasons. He’s also the third-youngest tight end in NFL history to surpass the 2,000-yard mark entering his fourth year. He’s more than a tight end for the 49ers, but rather the No.1 option in the passing game and perhaps the fundamental building block for the franchise.

“Brett Favre was the guy I probably respected the most because he had so much damn fun playing the game,” GM John Lynch said, following Kittle’s signing. “You look over in a tense game and he’s doing the YMCA in the huddle or something. To me, George is reminiscent of that. In the midst of intense and tough and tight situations, you just see an exuberance with him that’s special.”

Long before Kittle even found his way into the Iowa alum of successful tight ends, Kelce was the class clown of the NFL. Another original draft class member by a head coach, the Cincinnati product has been the focal point of Andy Reid’s offense in a similar fashion. A mismatch in speed for linebackers and size for defensive backs, Kelce’s production has gone under the radar with Gronkowski stealing the spotlight in the AFC.

In roster filled with Sammy Watkins, Mecole Hardman, and Tyreek Hill on the outside, Kelce was the instrumental star in hoisting a Lombardi last winter. At his best under pressure, he finished this postseason second on the team with 19 catches, 207 yards, and four touchdowns. In the big game, age was just a number as Kelce (six catches, 43 yards) outperformed Kittle (four catches, 36 yards).

Kelce isn’t limited to an in-line role either. Playing in the slot as a true receiver, defensive backs are forced to cover the speed of Hill and Hardman while Watkins’ route-running can win alone. This leaves linebackers in the dust as the 6-foot-5 tight end wins mismatches and piles his way for big-time plays across the middle of the field.

“It’s a beautiful thing, and you know what, this community, Kansas City, I love you and I’m thankful that I’m going to be here for the next six years,” Kelce said, following his deal.

Kelce became the first tight end in NFL history to have four straight 1,000-yard seasons; a record Kittle could break by 2021. In seven years, he’s led the Chiefs in receptions five times and finished top two in years six. He too set a tight end record in 2018, surpassing Chiefs great Tony Gonzalez in 2018 with 1,336 yards during Mahomes’ first season under center.

A fellow two-time All-Pro and five-time Pro Bowler, Kelce isn’t without flaws, but his stability at the position makes him a staple in the history books whenever his story fold.