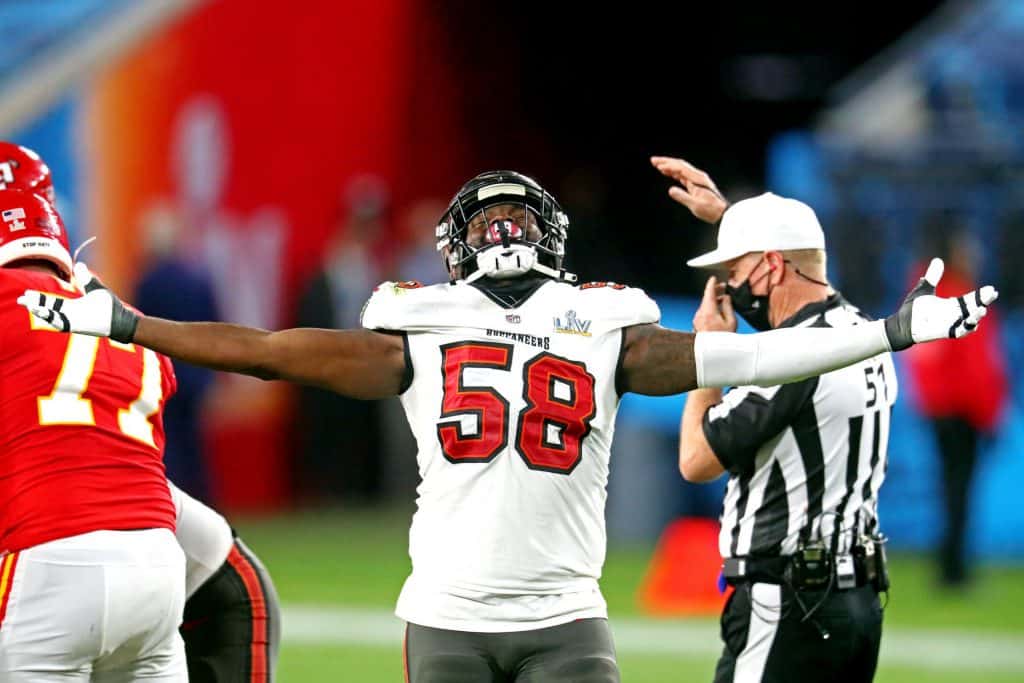 After playing on the franchise tag in 2020, what are Shaq Barrett’s landing spots when NFL free agency begins? Let’s take a look at which teams could be in the market for the Tampa Bay Buccaneers pass rusher over the coming days.

Barrett has enhanced his reputation in the last two seasons with Tampa Bay. In 31 regular season games, he has 27.5 sacks, 53 QB hits, and 30 tackles for loss. With two fantastic seasons in the books, where could be the top landing spots for Shaq Barrett in free agency?

A return to Tampa Bay seems the most likely outcome

Everything coming out of Tampa Bay suggests that they are looking to bring Barrett back. Various social media activities have suggested that Barrett is open to a return. However, money will be the ultimate deciding factor.

Therefore, it is important to note that Tom Brady reduced his cap hit by $19 million to open space for players like Barrett. It would be highly surprising if we do not see Barrett return to the Buccaneers this offseason.

Could Barrett remain in Florida with the Miami Dolphins?

If Shaq Barrett enjoys the Florida lifestyle, the Miami Dolphins make a lot of sense as a potential landing spot. Barrett would also be signing on to play for a team on the rise. A combination of Barrett, Emmanuel Ogbah, and an early-round pass rusher early in the NFL Draft would make for a terrifying pass-rush trio.

If money is what Barrett is after, New York can offer it in abundance. Having played on two one-year deals, Barrett may be searching for a big-money contract in free agency. The Jets certainly need to find a pass rusher, but would Barrett be willing to go to a team still relatively far from contending?

The Ravens’ need on the outside means Baltimore has its merits as a landing spot for Shaq Barrett. Baltimore is bracing to lose four pass rushers in free agency, and Barrett could provide the group with an immediate boost.

The Ravens are not far away from being challengers in the AFC. Furthermore, putting Barrett on that defense would give them one of the best defensive units in the league.

If the lure of the shiny New York lights is what the Buccaneers pass rusher is after, playing for the Giants could be an attractive option. The Giants need to upgrade their pass-rush group and are losing some players to free agency as well.

What makes this an intriguing landing spot for Shaq Barrett is the uncertainty surrounding this franchise. However, his addition would certainly give them an excellent defensive unit.

What is Shaq Barrett’s market value in free agency?

It is easy to think Shaq Barrett will command a good price at whichever landing spot he chooses. Barrett is by far the top free agent at his position in 2021. On the other hand, the depth of the EDGE position in this market could decrease his potential earnings.

Compared to the likes of Dee Ford and Preston Smith, Spotrac has Shaq Barrett pegged at around $19.7 million per year over a four-year deal. This would make Barrett the sixth-highest paid EDGE in the NFL heading into 2021.