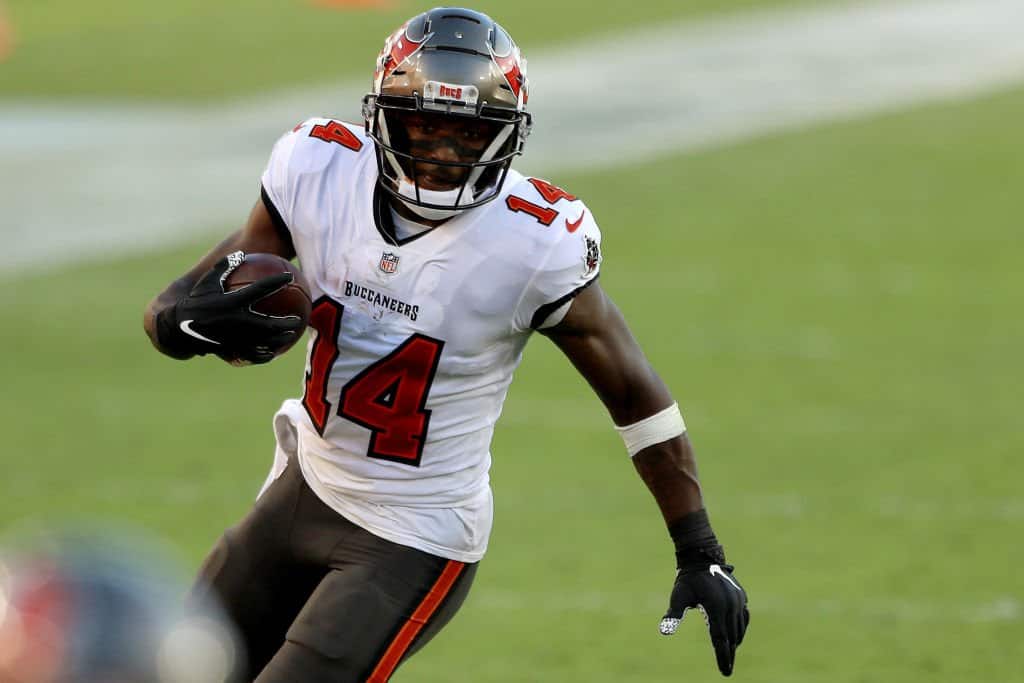 With the NFL Draft order set and the salary cap now at $182.5 million, the NFL offseason is on its way. It’s now time for all 32 teams to reshuffle and rebuild their rosters in preparation for the next season. PFN’s Top 100 NFL Free Agents of 2021 list was formed by a mix of player value (age, injuries, etc.), positional value, and individual film evaluation of these players.

Note: There will be players who are cut after this article is posted. They will not be in the initial post of this article, as those will occur after this has been published. This is only taking into account unrestricted and restricted free agents who will have their contracts expire in the offseason or are cut before this article publishes, with the exception of Von Miller and Kareem Jackson, who have club options.

Special thanks to Brandon Thorn for the use of his True Sack Rate metric used throughout this article. Stats per Pro Football Reference and Next Gen Stats.

This piece was written on February 22. We will add updates as events unfold in free agency.

1. QB Dak Prescott – Update: Re-signed by the Cowboys on a four-year $160 million contract

I don’t really need to say much here, other than the fact that it’s entirely ludicrous Dak is even on this list of the top NFL free agents in 2021. Dak is an elite quarterback in the NFL and deserves to be here at the top of these rankings. Dallas needs to pony up and pay him, as the Cowboys have the cap space to do so, but that’s for a different article.

Dak has done literally everything to keep the Cowboys afloat and competitive in his tenure. There’s no reason an elite QB should even be sniffing free agency, but here we are. Every team is keeping an eye on the situation in Dallas. Dak would be an upgrade for most franchises at the league’s most important position.

Despite some injuries in 2020, Godwin still played at an elite level this season, helping Tampa Bay to a Super Bowl win. 67% of his red zone targets were touchdowns this past season, and his presence alone opened up the Buccaneers’ playbook.

He’s an extremely reliable target, with a catch percentage of 77.78% on 84 targets, good for third among all receivers. At just 25 years old, Godwin looks to be a long-time member of the league’s elite receivers.

After taking a year off due to health issues and disputes in Washington, it was incredible he was able to generate such spectacular tape in 2020. Williams put himself back into that elite echelon of offensive tackles. Even if he is 33 years old, that doesn’t diminish his value at all, considering he’s never dropped off in play.

The 49ers and every other team needing a left tackle should bust open their wallets for Williams this offseason.

Allen Robinson is one of the game’s best receivers, despite having below-average quarterback play for his entire career. Since 2019, Robinson is third in the league in receiving yards and one of only four players with 200 receptions.

He’ll be 28 years old this offseason but is still incredibly reliable. Robinson had 151 targets in 2020, third among all receivers, and had a catch rate of 67.55%. He isn’t one for separating, at just 2.3 average yards of separation, but Robinson is a fantastic WR1.

J.J. Watt has lost some of his absurdly freakish athletic traits, mainly just from injury attrition, but his effectiveness hasn’t dropped off much. He was the most double-teamed edge rusher in the NFL and still posted a 22% pass-rush win rate. His variety of pass-rush moves and counters, combined with his length and power, help him continue to dominate offensive linemen.

Watt still played over a thousand snaps this season, despite the past injuries. He helped pick up the slack on an otherwise extremely poor Houston defensive line. With help on the other side, Watt could be a perennial double-digit sack guy on the right team.

Brandon Scherff has been one of the game’s best guards for years. The former No. 5 pick is the only player taken in the top 10 that year who is still on his original team, and it’s because he’s been a stalwart anchor for the team. While some will argue the “positional value” of Scherff, take a look at the defensive tackles across the league and tell me a top-5 guard isn’t valuable.

Miller has been one of the game’s best pass rushers, perhaps of all-time, if not the best of the 2010s. Von Miller has only had two seasons where he didn’t post double-digit sacks, and in both seasons he missed playing time (still put up a combined 13 sacks).

The off-field question marks notwithstanding, Miller should be at the top of any team’s free agency wish list if Denver doesn’t pick up his option.

Affectionately nicknamed “Sack Barrett,” Barrett has vaulted himself up into the game’s upper echelon of pass rushers the last two seasons. Barrett posted 19.5 sacks in 2019 and followed that up with 8 sacks in 2020. Barrett posted 3 high-quality sacks per Brandon Thorn’s True Sack Rate metric.

Tampa Bay has more than a few names on this list of the top NFL free agents in 2021, and he has to be a priority re-signing for the team. However, his price tag will be steep, and teams will certainly roll out the trucks for his services.

Often left out of the discussion for the top safeties in the game, Simmons has quietly put together excellent seasons in 2019 and 2020 under Vic Fangio. Simmons is one of the game’s best cover safeties but is just as effective playing in run support as well.

Vic Fangio helped Eddie Jackson become the game’s highest-paid safety and will likely do the same for Simmons.

Another Buccaneers player on this list of the top NFL free agents in 2021, David has been an elite linebacker virtually since he stepped into the NFL. His Super Bowl performance against Travis Kelce is an all-timer and is certainly something teams will remember going into free agency.

He’s been with Tampa Bay his entire career, but can they afford to pay him and their other free agents on this list?

Darious Williams has blossomed into one of the game’s premier corners, despite being an undrafted free agent. Williams has never allowed more than 70 yards in coverage in a single game, and came up clutch for the Rams repeatedly all season.

A restricted free agent of the Rams, it’s incredibly likely Williams is back with the team next year. However, with how strapped the team is in cap space, a team with the money could try and tempt him away from Los Angeles.

It’s rare to have one top-tier offensive tackle be available in free agency, but two? Even more so.

The Panthers haven’t ironed out a deal with Moton yet, which is shocking, given his near-elite level of play the last three years. At just 27 years old, Moton will still command a high price, likely somewhere in between Trent Brown and Jack Conklin’s contracts.

J.C. Jackson is one of my personal favorite studies on tape but rarely gets brought up in the conversation with the best corners. While he’s not an elite, top-5 CB like his running mate Stephon Gilmore is (at least not yet), Jackson is still an excellent cover corner. Jackson posted 9 INTs this season and was the first NFL player with an interception in five straight games.

It’ll be tough to pry him away from New England, but Jackson is a Pro Bowl/potential All-Pro CB waiting to happen.

I’ve seen Golladay higher on other free agent lists, but Golladay has only played one full season in the NFL and has struggled to separate consistently in his career. As a result, I have him just a little lower on this list of the top NFL free agents in 2021.

Golladay is excellent in contested situations and wins downfield accordingly, but he likely won’t fetch the price tags Godwin and Robinson will. Still, Golladay is an excellent weapon outside and will command a high price in free agency if he isn’t franchise-tagged.

It isn’t every day an All-Pro center is available in free agency, but Linsley is slated to be an unrestricted free agent this year.

He topped ESPN’s “Run-Block Win Rate” and was fifth in their “Pass-Rush Win Rate.” Linsley has been one of the game’s best centers for years, and he’ll turn that into a nice payday this offseason. The question is, will that be with Green Bay?

Anthony Harris was one of last season’s hottest commodities before being franchise-tagged by Minnesota. Now with no extension reached yet, Harris is slated to hit the market once more. Harris took a step back from his 2019 play, but he still played at a high level in a demanding defense.

While Harris is 30 years old and likely won’t be the game’s highest-paid safety, he’ll still fetch a hefty contract in free agency.

A tackle-to-guard convert from college to the NFL, Thuney has been a pro’s pro and steady presence in New England. Thuney has been one of the game’s best guards for a few years now.

Miami was interested in his services last year before he took the franchise tag with New England. Are they willing to circle back again this year?

Despite being a former top-6 pick in the 2015 NFL Draft, Williams has gone somewhat under the radar in the NFL. While he hasn’t quite lived up to his pick, he’s been an excellent pro for the last few years. His career seemed to get a bit of a revival while with the Giants.

He’s blossomed into a great run defender, and his pressures and sacks have increased quite heavily. Still only 26 years old, Leonard Williams is entering his prime and could be a quality free-agent nab for a team looking for that extra piece inside.

The value of Hunter Henry is a tough pendulum. He looked primed to be mentioned in that upper tier of tight ends in the NFL, but the injuries have continued to crop up.

Henry so far has excellent chemistry with Offensive Rookie of the Year QB Justin Herbert, and it’s unlikely the Chargers let him go. However, with the dearth of tight end talents across the league and the spread of Shanahan offenses, teams might be willing to break open the bank for him.

Marcus Williams looks like an unfortunate cap casualty for the Saints. He’s an excellent coverage safety with the range, ball skills, and IQ to disrupt passing games.

At just 25 years old, Williams is still very young. As a result, he’ll likely command a contract near or at the top of safety contracts. Unfortunately, he is oft-remembered for being on the wrong end of the Minnesota Miracle, considering he’s developed into one of the game’s best safeties.