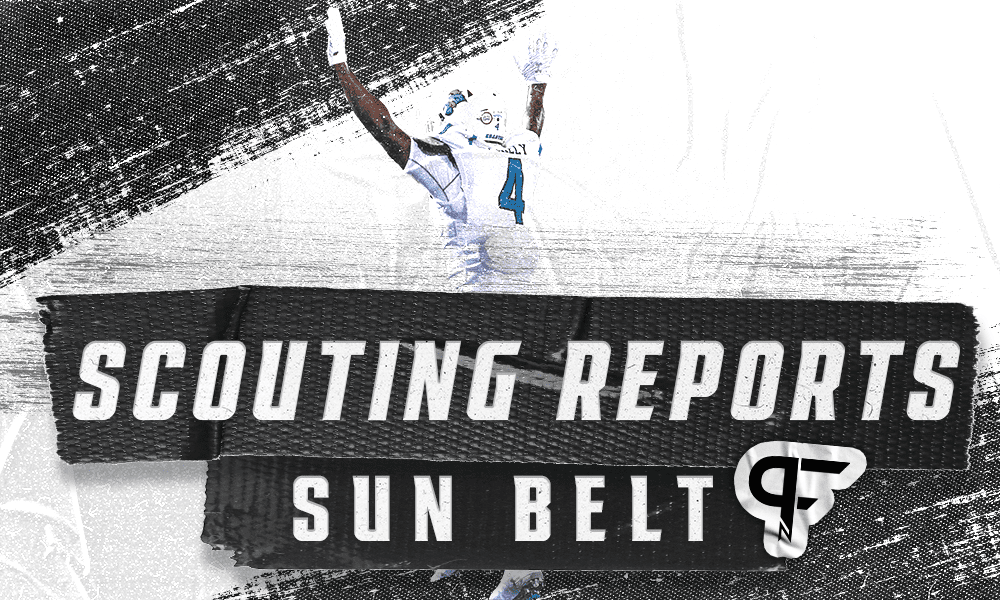 With the 2021 NFL Draft behind us and the college football season around the corner, it’s time to set our eyes on the next group of NFL hopefuls that could be available next April in the 2022 NFL Draft in Las Vegas. As such, in this edition of my annual Preseason Summer Scouting series, we’ll take a look at the draft prospects and scouting reports from the Sun Belt.

All of my Sun Belt previews are below. To view my grades and projected draft rounds for Sun Belt draft-eligible prospects, scroll to the end of the article.

Who are the 2022 NFL Draft prospects to watch from each Sun Belt team?

Appalachian State has been the class of the Sun Belt the past decade, though that hasn’t translated to the NFL Draft. It’s been primarily Day 3 picks coming from the program, and in a best-case scenario, App State will have a Day 3 selection in 2022.

Shaun Jolly seriously considered entering the 2021 NFL Draft but chose to return for his senior season. Jolly is a terrific corner with the speed and ball skills to line up at dime or nickel back on Sundays. While I grade Jolly as a sixth-round prospect, scouts I’ve spoken with have a much lower opinion of the cornerback and grade him as an undrafted free agent.

Junior safety Ryan Huff is an up-and-comer who could move into the middle rounds if he improves upon a terrific 2020.

Demetrius Taylor returns for another senior season after a disappointing 2020 campaign. Taylor is a tough, intense defender who is explosive and quick. The problem? Taylor is a scheme-limited prospect whose only real position at the next level is at three-technique defensive tackle.

Appalachian State has four receivers who have an outside chance of being drafted next April. Indeed, Thomas Hennigan, Corey Sutton, Jalen Virgil, and Malik Williams all bring different skills and will have a place in the NFL as No. 5 wideouts.

Despite having a program that shows up in bowl games, Arkansas State has not had a player drafted since 2014. I doubt that changes next April.

If any ASU player gets selected in the 2022 NFL Draft, it would be receiver Dahu Green. The senior is a long target who catches the ball with his hands and makes a lot of tough receptions. He lacks outright speed and burst, but Green could sneak into the last round if he plays up to expectations.

Keep an eye on linebacker Joe Ozougwu, a transfer from North Texas with next-level computer numbers.

Coastal Carolina was one of the best stories of the 2020 college football season. Despite all the issues last year, Coastal showed up to play every week and usually won. We’ll now see the fruits of the recruiting labor this April, as the Chanticleers will start to have a major impact on the NFL Draft.

Tight end Isaiah Likely is graded by scouts between the fourth and seventh rounds. In my opinion, he’s a Day 2 pick and would’ve been the third or fourth tight end selected in April had he opted for the draft, which he chose to bypass due to a foot injury. At 245 pounds, Likely plays the tight end position like a big receiver, consistently getting downfield and making big plays. He’s athletic, sure-handed, and effectively blocks at the second and third levels.

How he’s graded anywhere outside the top 100 based on last year’s film and his computer numbers is beyond me.

Jeffrey Gunter flashed brilliance last year as a playmaker coming out of a three-point stance and standing over tackle. He’s a tall, quick prospect with change-of-direction ability. Gunter shows stiffness in his game and must add bulk to his frame, but he has a large upside.

Coastal has two highly-rated underclassmen, starting with nose/defensive tackle Jerrod Clark. He is a wide-bodied lineman who occupies blockers in the middle of the field and makes a lot of plays behind the line of scrimmage.

Quarterback Grayson McCall is highly thought of in the scouting community and is an up-and-comer at the position. He’s a smart signal-caller with an accurate arm as well as the athleticism to pick up yardage with his legs. I question his arm strength, but there’s no denying McCall is a leader on offense.

Jaivon Heiligh flashes big-play ability at receiver but drops a fair number of passes, while Kameron Brown is a big-bodied wideout who dominates on occasion. Brown may be best putting on 10 pounds and moving to tight end.

Cornerback D’Jordan Strong is crazy underrated with a nice upside, and he can line up in dime packages on Sundays.

Georgia Southern did not have a player selected last April, and its job was made much harder next year after the departure of the program’s top prospect. That prospect is safety Kenderick Duncan Jr., who now plays for Louisville and is graded as a third-round prospect on my board.

A different defensive back, cornerback Darrell Baker Jr. could be selected in the late rounds with a big season. Baker has outstanding size and flashes big-time ball skills. He needs to play at a high level consistently, but he has an upside.

Georgia State is a newer program that has made strides on the field, but it has had little impact on the draft. That could change in the near future.

Georgia State has several underclassmen prospects on offense, but none grade nearly as high as redshirt-sophomore signal-caller Cornelious Brown. A tall, athletic passer with a rocket arm, Brown can make all the throws in or out of the pocket. He’s swift enough to elude defenders and picks up a lot of yardage with his legs.

Brown needs to polish his game but has a huge upside. I presently grade him as a mid-fifth-round selection, but he has Day 2 physical skills and will make a big move up draft boards if he progresses on the field.

Jamyest Williams showed promise at cornerback early in his college career at South Carolina, but he’s hit a speed bump since. He’s presently listed at running back on the Georgia State depth chart.

The Ragin’ Cajuns have consistently placed players into the NFL Draft since 2015, and the trend is set to continue the next few years. Louisiana’s top prospects are in the secondary as well as the offensive line.

Senior safety Percy Butler lacks great speed and times in the mid-4.5s at 196 pounds, but he’s a tremendous football player with a great head for the game. Butler is instinctive, tough, and makes plays against the run and pass. I could definitely see him developing into a third safety on Sundays.

Max Mitchell is a long, powerful right tackle prospect with growth potential. Additionally, he annihilates opponents at the point and does a solid job in pass protection.

The above three are graded as sixth-round prospects on my board, as is Carlos Rubio, an underrated left tackle who blocks with great fundamentals and has a complete game. Rubio moves well about the field, but he may not have the length teams want at tackle and could find himself at guard on Sundays.

South Alabama, the new home of the Senior Bowl, had just its second player ever drafted last year when the Saints took receiver Kawaan Baker in Round 7. Consequently, wideouts again top the Jaguars’ board for the 2022 NFL Draft.

Throughout the process of underclassmen announcements late in 2020, I consistently reported that Jalen Tolbert was seriously considering entering the draft. He chose to return for his senior season, and scouts have placed some lofty expectations on him.

Tolbert is a lanky receiver with long arms and big hands. He shows great focus as well as concentration, winning out in battles and coming away with the grab in a crowd. Although he’s not a true downfield threat, Tolbert catches the deep ball well.

His grades range anywhere from a Day 2 pick to a seventh-round draft choice, depending on the scout you speak with. I grade Tolbert as a sixth-round prospect. Although I like his ability, I view him as a No. 4 receiver at the next level.

Jalen Wayne is slightly bigger than his teammate but isn’t as consistent of a receiver.

Well-traveled quarterback Jacob Bentley will play his final year in college at South Alabama. Once a highly-rated prospect during his South Carolina days, Bentley has fallen mightily after turning in three years of subpar football.

Texas State has had just three players selected in the draft in its history, including a pair in 2015. However, the program could add to that total next April.

Marcell Barbee is a nice-sized, sure-handed receiver with tremendous quickness and sneaky speed. He does a great job separating from defenders and finding the open spot on the field. Additionally, he catches everything thrown in his direction.

Barbee’s ultimate draft position will rely on his workouts and 40-yard dash times. If he runs in the low 4.5s, he could and should be selected. If he runs in the high 4.5s, he’ll be on the outside looking in. Regardless, Barbee has enough ability to make an NFL roster as a fifth receiver.

Troy has had just one player drafted over the past decade, offensive tackle Antonio Garcia, a 2017 third-round pick of the New England Patriots (who turned into a huge bust). This year, they have a pair of solid prospects who presently grade as UDFAs.

Cornerback Terence Dunlap is someone I’ve had graded the past two years. Moreover, he has nice length and solid ball skills. Dunlap can play in zone or backed off the line of scrimmage, and he offers potential in dime packages on Sundays.

Receiver Reggie Todd possesses outstanding size and next-level pass-catching skills. He consistently makes incredible receptions and shows the ability to take over games. Todd has long arms and big hands but plays to one speed, which is below adequate. His size and pass-catching skills are enticing, and fast 40-yard dash times prior to the draft could push Todd into the late rounds.

You can sort my prospect rankings below by team, position, projected draft round, and conference (we’ll add new conferences throughout the summer). You can also utilize the search function to quickly find whatever you may be looking for. Mobile users — please note that the database is best viewed in landscape mode.