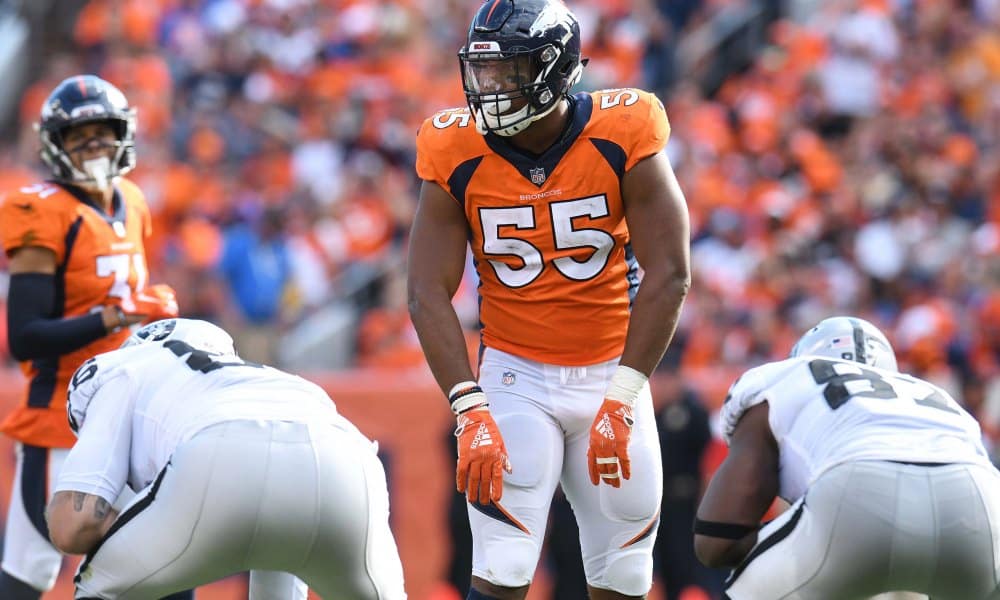 As the Denver Broncos get ready to report for training camp in the next two weeks, we continue our position review series with today’s focus being on Broncos outside linebackers in 2020. Featuring a combination of veteran experience and young playmakers, the Broncos edge rushers will be critical for the team’s success on defense next season.

Overview of the Broncos outside linebackers for 2020

When the Broncos announced Vic Fangio as their next head coach, the NFL world immediately began to discuss how he would utilize the team’s talented dynamic of Von Miller and Bradley Chubb, who as a duo in 2018, combined for 26.5 sacks on opposing quarterbacks.

The expectations for Chubb and Miller as a duo in 2019 were high, referencing what Fangio was able to do with Khalil Mack and Leonard Floyd in Chicago, provided hope that the Broncos could match a similar type of dominance off the edge. Unfortunately, the Broncos hopes of seeing that type of production didn’t occur after Chubb suffered a season-ending injury in Week 4 against the Jacksonville Jaguars. What can the Broncos expect from their outside linebackers in 2020?

Miller enters the tenth season of his career in the NFL with the Broncos and is aiming to compete at the highest level of his career. Despite only registering eight sacks in 2019, Miller was still playing at an elite level off the edge.

After Chubb tore his ACL against the Jaguars, Miller saw more attention from opposing offenses with exclusive attention from tight ends, tackles, and chip help from running backs. Opposing teams had game-planned to utilize a quick-passing offense in order to reduce Miller’s ability to get after their QB.

Despite the impacted off-season due to Covid-19, Miller has taken his training regimen to the next level in hopes of achieving several accomplishments this season. With the return of a healthy Chubb, Miller’s production could see a significant boost in the stat sheet in 2020. Only two seasons remain on Miller’s contract, which makes 2020 an important year for him as he hopes to lead the Broncos back to the playoffs, lead the NFL in sacks, and win defensive player of the year.

If Miller achieves any of those three things, it secures the likelihood that he will secure another contract that will one day allow him to retire as a Bronco.

Can Bradley Chubb play at the high level he was before his injury?

Chubb’s return to the Broncos this season is one of the team’s biggest storylines for 2020. After his 12 sack season as a rookie in 2018, Chubb looks to build off of what he was able to do then, and off of the fast start he had in 2019.

Despite only registering one sack in 2019, Chubb stood out as the team’s best defensive player throughout the first four weeks of the season. Broncos defensive coordinator Ed Donatell believes that Chubb will have his best season yet despite coming off of an injury.

“We’ve seen him running on tape, and he’s full speed and ready to go. You’ll see a really good year from him.” If Chubb can perform in 2020 with a similar motor that he had in both 2018 and 2019, the Broncos will likely have one of the league’s top defenses. Chubb even received recognition as one of PFN’s Top 100 Players of 2020.

After the Broncos lost Chubb last season to injury, Reed was one player that stepped up for Denver defensively. For the Broncos, Reed made his presence felt in the NFL preseason where he registered four sacks in just three games. His high motor, discipline off of the edge, and compressing the line of scrimmage stood out in his preseason action and carried over into the regular season.

Despite only registering two total sacks in the regular season, Reed showcased his value to the Broncos by being a key rotational player on defense and special teams. He filled in alongside Miller in various key situational downs. His role could increase even more in 2020.

Early projections for Reed place him as the Broncos third outside linebacker behind both Miller and Chubb. Reed will likely play a significant amount of snaps once again for the Broncos in 2020 as a rotational player and in key passing situations. He’s proven to be a valuable backup if Denver sustains any type of injury to players like Chubb or Miller.

Where is Justin Hollins expected to contribute the most?

Hollins’ role with the Broncos in 2019 was an experiment for Fangio and Donatell. Initially, he was drafted in the 5th round of the 2018 NFL Draft as a project player for the Broncos. Hollins’ previously played under former Oregon Ducks defensive coordinator Jim Leavitt, who coached with Fangio in 2011-2014 in San Francisco. Leavitt ran Fangio’s defensive scheme at Oregon, so the transition for Hollins to Fangio’s defense didn’t take long.

Fangio had Hollins learn the inside backer position during minicamp shortly after he was drafted, but he eventually demonstrated more comfortability at outside linebacker in the preseason. Hollins also found himself in the rotation for the Broncos defensively after Chubb’s injury.

In 2019, Hollins would contribute 21 total tackles and one sack in 15 games for the Broncos. When you reference the game tape on Hollins, his 6’5 250-pound frame stands out, but his athleticism and speed at that size is something that Fangio will utilize in various sub-packages during the upcoming 2020 season. Expect to see both Reed and Hollins on the field together when the Broncos make substitutions to keep Miller and Chubb fresh.

Can Jeremiah Attaochu find a role in a crowded position room?

The Broncos brought in Attaochu last season to add to the team’s overall depth after Chubb’s injury. He saw little playing time early on after being signed by the Broncos but saw an increase in snaps after Miller sat out in Week 13 against the Los Angeles Chargers.

He would register 3.5 sacks in 12 games of action for the Broncos, but more importantly, he provided the team with a veteran presence opposite of Miller. For Fangio, Attaochu’s presence grew to be an important factor for the team in 2019.

With Reed and Hollins continued development being a priority for the Broncos, Attaochu’s on-field role with the team in 2020 could be up in the air.

Will 7th-rounder Derrek Tuszka see time on the field in 2020?

In the 2020 NFL Draft, the Broncos selected Tuszka from North Dakota State University in the seventh round. Tuszka is a player that stands out on film due to his high motor, relentless pursuit to the football, and the developmental traits that he possesses to become a potential steal for the Broncos.

His 6’4 size and athleticism put him in a position to be a key special teams player in 2020. It’s unlikely that he sees much time on the field defensively, barring injuries to Reed, Hollins, or Attaochu. It will be important for the Tuszka to learn from Miller, Chubb, and Broncos outside linebackers coach John Pagano in 2020.

Tuszka could become a key player for the Broncos in the future as an edge rusher, but early expectations for him are limited due to the team’s depth and development of other players at the position. For the Broncos, they’re hoping that their dynamic pass rush from the 2018 season can return to form in 2020.