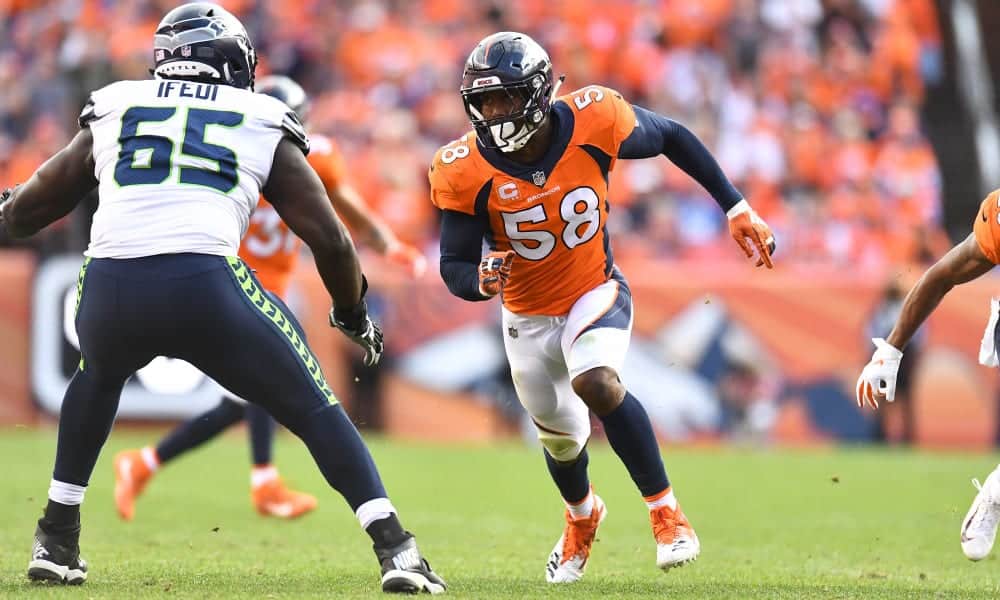 For Denver Broncos edge rusher Von Miller, getting to the quarterback is something he does very well. As a matter of fact, he’s gotten to the opposing team’s QB 106 times and hopes to reach the peak of 200 career sacks when he decides to hang up the cleats, someday.

Many local radio stations and various national media personalities have discussed Miller’s 2019 season as if he didn’t play well. The common argument references the stat sheet where Miller registered only 8 sacks all season long. If you reference the All-22 game tape, you’ll see that Miller hasn’t lost a single step.

Featured | John Elway preparing for comeback after Broncos rebuild for 2020

Head coach Vic Fangio and the Broncos defense got off to a slow start in the first four weeks despite Von Miller fighting through every snap to get after the quarterback. Teams began to utilize the quick passing game to help counteract the Broncos edge rushers with Miller and Bradley Chubb.

It wouldn’t be until Week 4 against the Jacksonville Jaguars where the Broncos defense would register their first sack of the season. Miller was able to get to Jaguars QB Gardner Minshew twice.

Through four weeks of the season, Miller hardly saw any double or triple teams from offensive tackles or tight ends. With Chubb opposite of him, he was able to have more one on one matchups.

Unfortunately for the Broncos and Miller, Chubb would suffer a torn ACL against the Jaguars in that Week 4 matchup. Denver was forced to overcome the loss of Chubb, and Miller shouldered even more responsibility as a leader on defense. Miller would create opportunities for various teammates defensively.

Clawing his way through cut blocks, chip releases from tight ends and running backs serving as the last line of defense, Miller’s task of getting to the quarterback was much more difficult than what most edge rushers in the National Football League would normally experience.

Creating opportunities for other players

For the Broncos, it became imperative to get production from other edge rushers opposite of Von Miller. We referenced how teams would scheme for a quick passing offense when Bradley Chubb was healthy alongside Miller, but most NFL teams weren’t aware of the Broncos depth after Chubb.

Malik Reed, an undrafted rookie free agent from Nevada earned a roster spot after a productive preseason as an edge rusher, he would get his opportunity to take advantage of opposing teams exclusively double and triple-teaming Miller. Reed would account for 2 sacks on the season as a key role player for the Broncos.

Justin Hollins, the Broncos 5th round selection from the University of Oregon would also establish himself as a speedy pass rusher. Hollins would account for 1 sack in 2019 for the Broncos opposite of Von Miller. Even though Reed and Hollins’ stat-lines for sacks aren’t high, their on-field impact was felt with the attention Miller was receiving in both the pass rush and against the run.

Denver would also bring in a veteran to help with the team’s youth opposite of Miller. Jeremiah Attaochu made an impact as an edge rusher, bringing down opposing quarterbacks for 4 sacks.

For many seasons, Miller would attest that a majority of his sacks came from the havoc that his teammate, defensive end Derek Wolfe, would cause. In 2019, it was a passing of the guard as the focus Miller received off the edge would allow Wolfe to have one of the best seasons of his career.

In 12 games this past season, Wolfe would register 7 sacks on opposing QBs. Denver’s other defensive end Shelby Harris would end up with 6 sacks. Demarcus Walker and Dre’Mont Jones would also have 4 sacks apiece.

His leadership paid off and other players knew that they would have to step up. The Broncos test of this theory was on display in Week 13 against the Los Angeles Chargers when Drew Lock made his debut as the team’s starter at QB. Miller would miss his first game in years with a knee injury after making 95 consecutive starts.

His teammates understood what they needed to do as the Broncos defense would sack Phillip Rivers 3 times in the team’s 23-20 victory.

Miller finished 2019 with 46 tackles combined, 33 of them being solo tackles. It was hard for teams to run the football to his side of the field, and it was even more difficult for them to have a clean pocket as Miller would tally 20 quarterback hits.

Miller eager for his best season yet

The Broncos got a lot from Von Miller in 2019, but he wasn’t satisfied with his season in particular. His level of focus and preparation changed after reflecting on the Broncos missing out on the playoffs for the fourth consecutive season. Miller began his work right away.

After skipping this routine in the 2018 off-season, Miller would once again begin training with noted “Hell’s Trainer” Frank Matrisciano to take things to the next level. He was seen working out with former Broncos edge rusher Shane Ray and Matrisciano in San Francisco.

His routine would soon be interrupted as Covid-19 began to impact the world, forcing Miller to return home to Denver. Fast forward a month later to April, Miller tested positive for Covid-19, making him the first player in the NFL to encounter the virus.

It was another opponent that he would be going against, and luckily he was able to make a full recovery. The reality of the world was much different and the ability to train the way Miller wanted to was no longer possible.

Miller’s career goals, however, remain intact. He wants to win the NFL’s defensive player of the year award, and he wants to lead the NFL in sacks. Despite the looming questions about how the upcoming season will work, Miller’s focus remains the same.

For the NFL, opposing quarterbacks will look to identify where number 58 is lined up at this upcoming season. With Bradley Chubb returning from his ACL injury, the team’s addition of Jurrell Casey, and contributing depth all across the board, the Broncos lethal pass rush led by Miller could be back and better than ever.