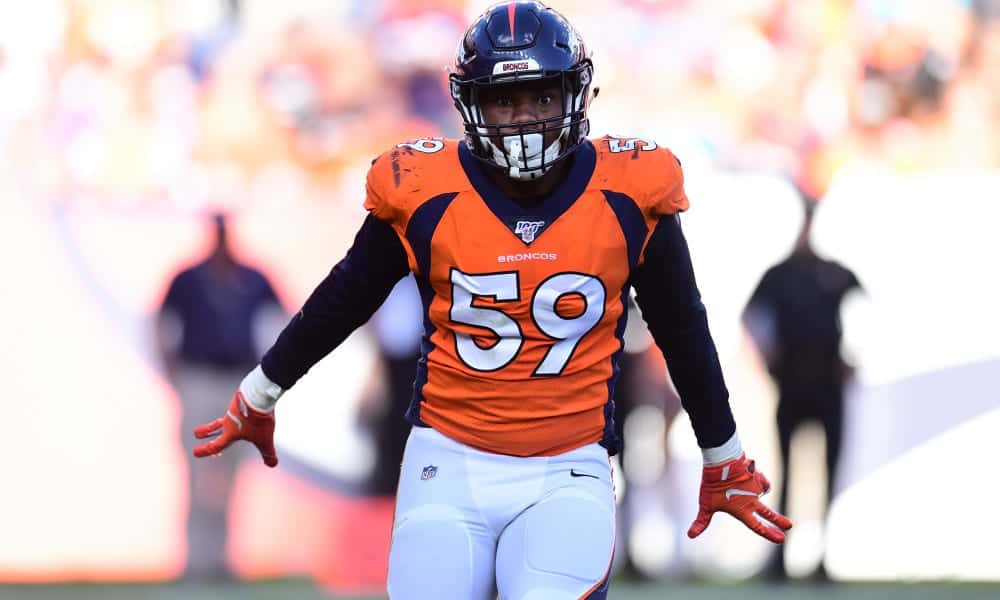 Throughout their history on the field, the Denver Broncos have benefitted from the performances of various undrafted gems. Whether those players helped lead them to a Super Bowl, or they primarily played a key role on teams that had losing seasons, their track record has been widely documented.

As the National Football League continues to navigate the waters of operating during the Covid-19 pandemic, the short term implications and restrictions could prevent the Broncos from finding undrafted gems from their 2020 college free-agent class.

For the Broncos, they have discovered undrafted gems who have played a major role in the history of the team. More recently, some contributed to the Broncos winning Super Bowl 50.

The Broncos discovery of Chris Harris Jr. turned out to be one of the team’s biggest success stories at the start of general manager John Elway’s tenure. Harris Jr.’s first impressions during training camp revealed that he was scrappy and competitive.

Bailey took Harris Jr. under his wing and instilled more confidence in him throughout camp. Fast-forward to 2020, Harris Jr. is no longer a member of the Broncos organization, but his accomplishments speak for themselves. Super Bowl champion, 4x Pro Bowler, First-team All-Pro in 2016, and recently named to the NFL’s 2010 All-Decade team.

Anderson was a valuable impact player for the Broncos from 2013-2017. He was critical for Denver during their run to the Super Bowl in 2015. From the game-winning touchdown against the New England Patriots in overtime to his hard-nosed rushing style against the 2nd ranked defense in 2015 against the Carolina Panthers in Super Bowl 50, Anderson put the Broncos in a position to win.

One of the more notable moments of Smith’s career came in Super Bowl 33 as he finished the game with 5 receptions, 152 yards receiving and 1 touchdown catch. Smith’s legacy with the Broncos is held in high regard, and there is hope that he’ll soon become the next Bronco to wear a gold jacket in Canton, Ohio.

Lindsay has been the Broncos’ most valuable undrafted gem in the last two seasons. He’s accomplished back to back 1,000-yard rushing seasons, making him the first undrafted player in NFL history to accomplish this feature. His quick-burst ability and vision as a ball-carrier have the Broncos in a unique position in comparison to most NFL teams.

It only took Lindsay one practice to gain respect from his teammates. More notably, Super Bowl 50 MVP Von Miller’s praise after a training camp practice in 2018, became a ringing endorsement for Lindsay. “We’re definitely going to have some things planned for Phillip, guys like that in the league, you just can’t cover them. They’re just assets to the offense. You have to have a back like that and we definitely have one.”

Fast forward to 2020, Miller’s endorsement proved to be true.

Reed was the Broncos undrafted gem from the 2019 season. Previously, the Broncos depth at outside linebacker featured extensive competition. Outside of Miller and Chubb, Denver had a rotation of players like Jeff Holland, Justin Hollins, veteran Dekoda Watson, and Aaron Wallace all competing for a spot in the team’s rotation.

It didn’t take long for Reed to make his impact felt during the NFL preseason. In three games of action, Reed would register 4 quarterback sacks. His high motor, quickness, and edge discipline were traits that head coach Vic Fangio noticed. With Fangio’s track record with pass rushers, he knew what type of player he had in Reed.

Reed would go on to play a pivotal role for Fangio and the Broncos defense in 2019 after Chubb tore his ACL.

Who are the Broncos’ potential undrafted gems in 2020?

The Broncos brought in seven undrafted free-agents following the conclusion of the 2020 NFL draft. Three out of seven players have been widely projected to potentially become the next Broncos undrafted gem.

Manning is an intriguing prospect for the Broncos at WR. Despite the amount of depth and youth they already feature in the position room, Manning is a 6’2, 200 lb target who displays a strong release off the line of scrimmage, size, and the ability to track the football at an elite level.

Bassey has become a media favorite for those who have watched film on him from Wake Forest. His college defensive coordinator, Lyle Hemphill, described how he felt Bassey would translate to the NFL game.

“We utilized him and played him a lot at boundary corner so a lot of times he was in the run fit and he showed up in the run game a lot. Coverage wise he bounced around on first and third down — he’d play corner on first down a lot of times, and he’d play nickel on third down. He can play in the slot, he can play on the outside guy. He’s pretty versatile.”

As the competition heats up for the Broncos third running back spot on the depth chart, Bellamy could become a potential replacement for Royce Freeman. At Western Michigan in 2019, Bellamy ran for 23 touchdowns and 1472 yards on 266 carries.

Despite having a total of 617 total carries in 5 seasons at Western Michigan, Bellamy’s quick-twitch ability and patient running style could push Freeman and Khalfani Muhammad for the third spot on the depth chart.

Why could the Broncos trend of finding undrafted gems be in danger?

As the NFL continues to devise a strategy for a successful launch of the 2020 NFL season, the outline for their plan could end the dreams of undrafted players before they even begin.

The NFL and the NFLPA discussed last week, the idea of eliminating the NFL preseason in 2020. For the Broncos and the rest of the NFL, they would have to begin the process of cutting down their overall roster size.

The talk right now around the league indicates that NFL teams would need to trim their active roster from 90 to 75 by the time veterans report according to Pro Football Network Chief Draft Analyst and Insider Tony Pauline.

As pointed out by Pauline, there is a possibility that the younger players and college free agents might be able to use the first week of camp, without veterans, as a try-out to make their case to the coaches.

For the Broncos during training camp in 2019, Fangio and his coaches rotated rookies and college free-agents in with the first and second-team units, to evaluate if they have the traits to play in the near future. If the NFL follows through with the idea of reducing the roster before veterans report, the Broncos may not get the opportunity to find another potential undrafted gem.